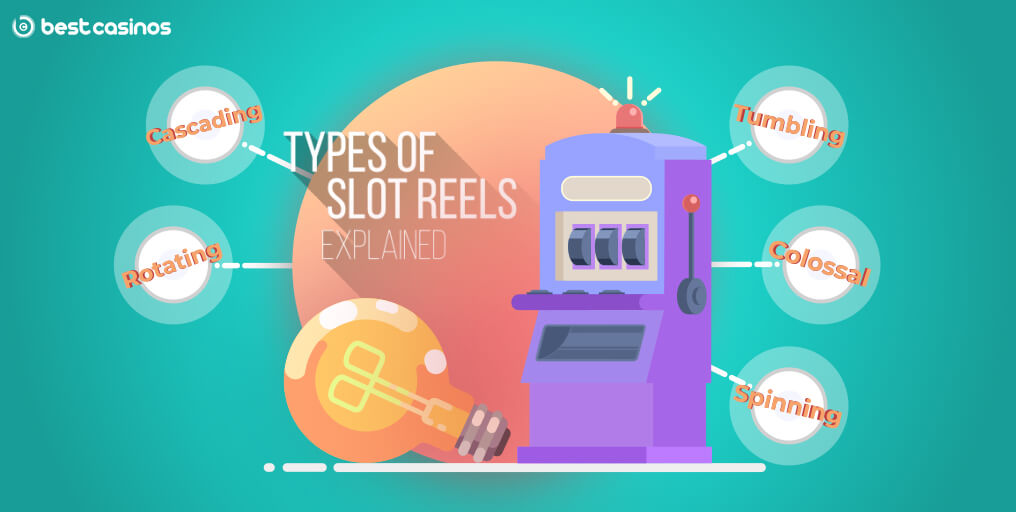 From the vintage three-reel one-armed bandits to modern-day standardized five-reel games, the choice of online slots has increased significantly in recent years.

With technology constantly pushing forward online casino software providers are on a never-ending mission of upgrading their offering and improving their game developing methods that would set them apart as the market leaders and industry innovators.

In developers’ constant race for perfection and innovation, it is the slot game players who benefited greatly as they have been graced with a plethora of uniquely exciting products some of which have gone over to become industry standards even.

When talking about innovation, changes in games’ visual identity have arguably been most prominent but the evolution of game mechanics should not be neglected as well. It might be argued that changes in special features department have taken limelight most prominently but all of the positive changes with slots reels definitely deserve to be recognized.

The number of reels is not the subject of interest in this editorial, however, but rather a mechanical model deployed by slot developers which adds an extra depth to every gameplay.
Starting with the classic spinning reel systems to some rather special variants, here is the list of reel types we will be analyzing here:

Not much different from the mechanical wheel pushing the symbols inside a slot machine to make winning combinations, spinning reels on an online slot game are the basic reel model deployed in the greatest number of games.

What Are Spinning Reels?

The essential mechanic behind the largest number of available slot games, Spinning Reel systems will see symbols on a column – usually three inside a 5×3 reel set – move vertically around the middle axes falling down and out of the screens in circulation.

Despite working on the basic game mechanic these slots generate the biggest interest from the players. The element of surprise is achieved by adding a different number of paylines which increases the combination potential.

Where to Find Spinning Reels?

From the biggest of slot developers such as NetEnt, Microgaming or Playtech to the emerging names in the business – Yggdrasil and Play’n GO – spinning reel slots come in abundance. Being a game of choice for many a player online, a classic spinning reels game can be found virtually at all best online casinos out there. 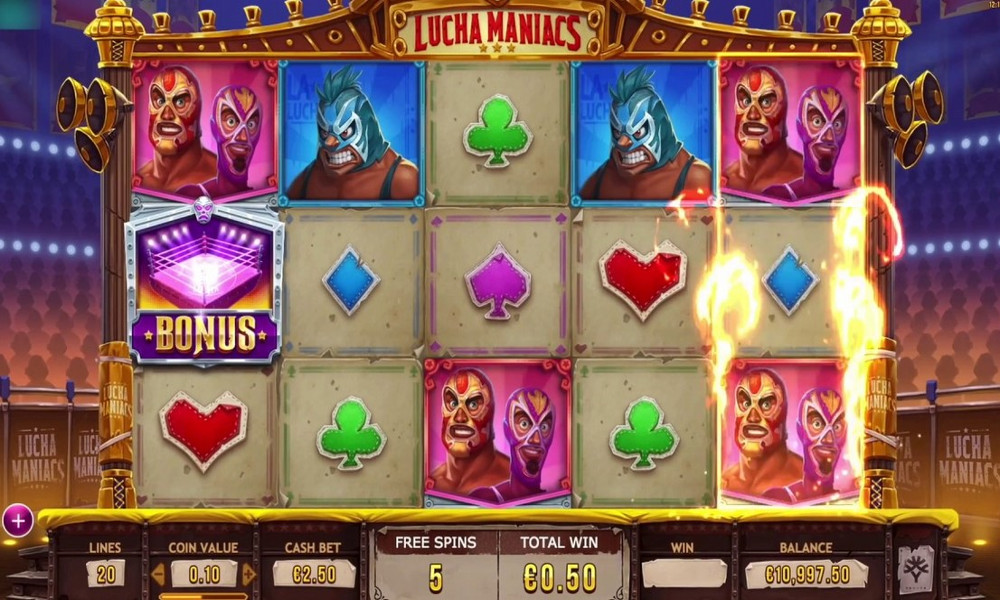 It might be one of the latest slot games from this up-and-emerging slot developer but Lucha Maniacs is as good as a spinning reels example as any. It deploys a standard 5×3 reel grid filled with Mexican wrestlers inside a graphically rich gameplay.

This vibrant presentation comes with a selection of different Wild symbols which add depth into a classic spinning reel mechanic, whereas it’s up to the Poster Bonus Game and the Free Spin mode to add a special element for all the players involved.

Another 5×3 layout with an ever-lasting Egyptian theme, Temple of Tut is a 10-payline slot game with a Super Reels bonus which adds Wild elements onto the regular spinning reels to boost your chance of winning big. It also comes with a Free Spins bonus giving you up to 20 complimentary rounds.

When talking about incorporating vintage and classic elements into the advanced gameplay, Play’n GO House of Doom slot is one of the most illustrative examples of such a blend’s perfection. This 5×3 presentation with not more than 10 paylines is bursting with special features adequately called Hellgate, Doom Spins, Wild House of Doom and Skulls of Abyss.

When all the special and bonus features your game of choice become utterly ineffective in helping you create winning combination it can be down to a good old twist on the reels to help you get those symbols in a desired position. And this is exactly where Rotating Reels come into play

What Are Rotating Reels?

This type of reels has only recently started being incorporated into slots but it is beginning to gain quire an admiration from the enthusiastic slot players. These reels are genuinely an intriguing addition to every gameplay. They will rotate the symbols on the grid 90 degrees after every spin to shuffle the symbols and rearrange them to give you a better chance of lining them within a payline.

Where to Find Rotating Reels?

Being a relatively new invention, rotating reels are not easy to come across. There aren’t many games – or developers – utilizing this ingenious system. Thus far, we only have the US-based game manufacturer Genesis Gaming and Bookimg Games creating games with rotating reels. 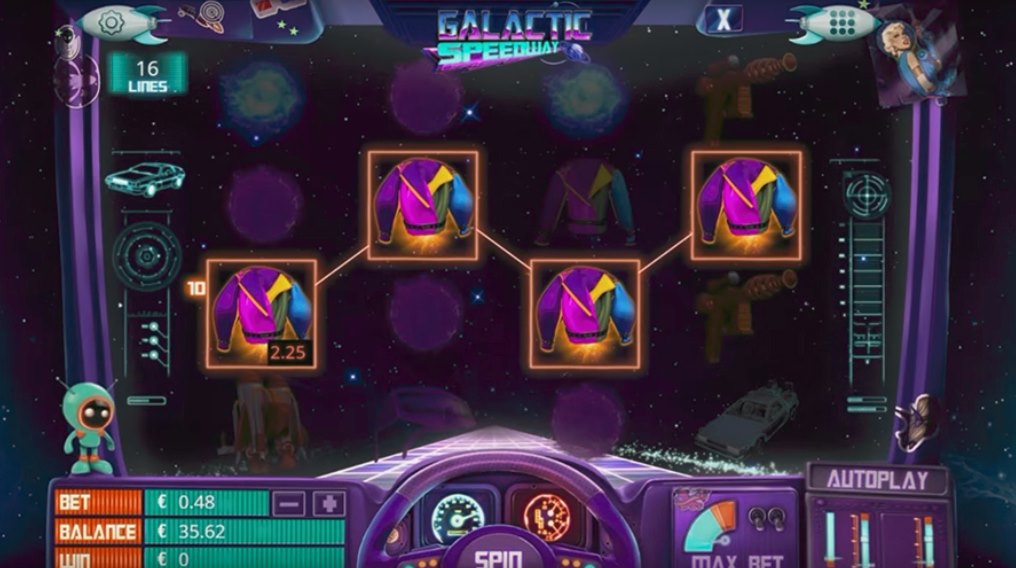 This slot is a 4 reel and 4 row title which boasts the total of 16 paylines. As the name itself would suggest, this right here is a space theme which has gained quite a handsome audience over the past couple of years. The Rotating Reels in this particular game are part of a special feature which gets triggered once the players hit the spinning galaxy symbol on the reels.

Another 4×4 reel set which is a perfect frame for Rotating Reels. This ancient Egypt theme comes with 20 paylines and is a hugely popular game. Egyptian titles have always been a positive choice of a wide playing base and this particular cherry on top of a cake – Rotating Reels we mean – has only increased the allure of this particular title.

Cascading reels and their introduction into the slot game world was arguably the most popular invention that slot enthusiasts have been blessed by in recent times. From the first moment they got presented to a wider audience, Cascading Reels spread like wildfire with many a slot developer choosing to at least attempt to incorporate them in their new titles – albeit in various forms and shapes.

What Are Cascading Reels?

Cascading Reels are different to traditional slot games with spinning reels and offer a much more dynamic gameplay which will – at the same time – increase your chances of landing a win. Cascading Reels have been introduced in new-generation slot titles which deploy modern software which allows video animation.

The animation part is adding an excitement element to the reels which will see symbols drop from above the reels on every spin. Once you land matching symbols in an active payline, the winning symbols will either explode or disappear from the screen in any other visually appealing manner, to make way for new symbols to drop in their place. This way, the players are given a sort of a re-spin which increases a player’s chance of landing consecutive wins.

Where to Find Cascading Reels?

NetEnt have been the most prominent slot developers to truly kick it off with Cascading Reels. Having replaced the traditional spin-the-reels process, NetEnt has introduced the Avalanche feature during which winning symbols explode in a 3D view. NetEnt has called this set-up Avalanches. 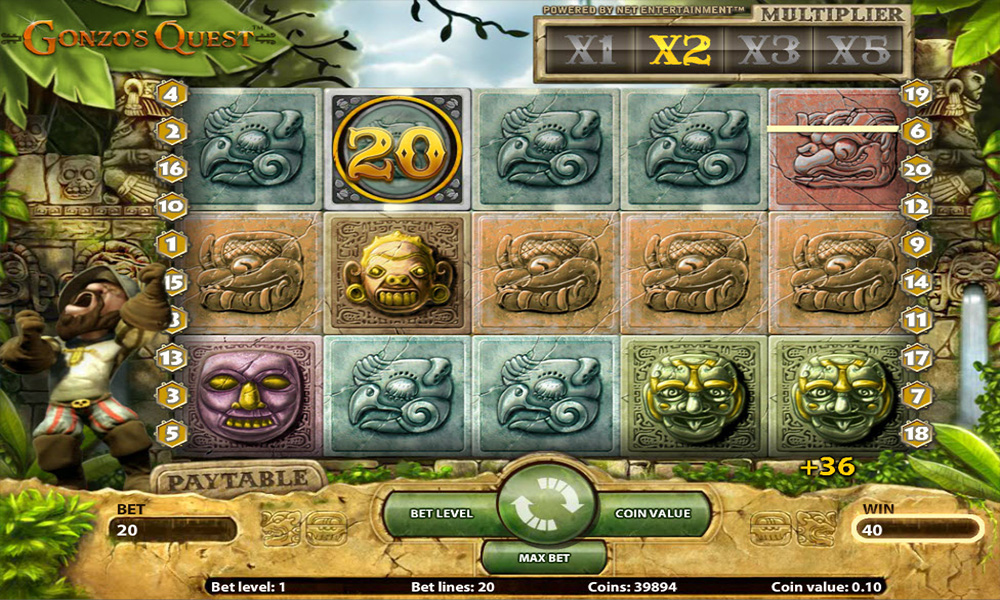 To honour one of the pioneers in the industry, we’ll start with NetEnt’s Gonzo’s Quest and its Avalanche reel mechanics. The innovative – and some would dare say revolutionary – approach to game development has made Gonzo’s Quest NetEnt’s first platinum video slot game. It follows Gonzo the conquistador, a character based on the real historical person Gonzalo Pizzarro.

As another standout name in the gaming market, BetSoft has boosted its reputation over the past couple of years thanks to its incredibly innovative 3D slots. Birds slot is definitely one such, particularly as it deploys a visually appealing gameplay.

This game tells a tale of a couple of different-coloured birds which come to and go from the reels set represented as the electrical wiring. Once you make a winning combination, the birds will fly aay from the grid and new ones will fly in their place. Birds is a truly remarkable game which will entertain both new and seasoned players alike.

Easily compared to Cascading Reels, the Tumbling ones are just their reenactment in a different form and shape.

What Are Tumbling Reels?

The overall idea between the two main types is exactly the same, however. With the tumbling playing mechanic, the reels will continue to spin – or better-said move – in the same fashion as always, but all winning combinations will be cleared from view after you collect the coins. Tumbling as a more general form of cascading reels can come in forms of Imploding Symbols and Swooping Reels, usually deployed during special features.

Where to Find Tumbling Reels?

There’s quite a list of game developers who have started incorporating the exciting tumbling reel system into their slot titles. BetSoft, Quickspin and IGT are definitely two of the most prominent gaming giants who deploy tumbling reels within the bonus rounds and special features, which was the case with Sugar Pop game and Da Vinci Diamonds, or Pixies of the Forest. 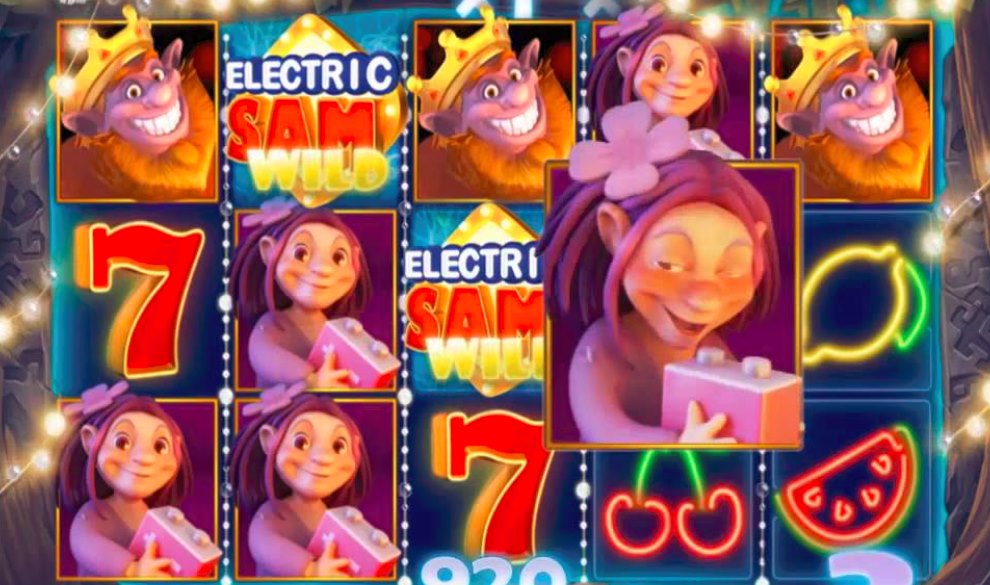 In order to further describe different variants of the Tumbling Reels, here is a look at the Electric sam slot by Elks Studio which deploys Imploding Symbols. In a manner similar to all aforementioned games with different types of cascading reels, this game will see winning symbols implode with new symbols sliding in their place to potentially boost your winning potential.

You all know the story of three little pigs and the big bad wolf chasing them all around. This Quickspin’s excellent game is a perfect example of the Swooping Reel system found in the Pigs Turn Wild feature. As you keep lining up winning combos, the win symbols will be replaced by the symbols directly above. They will keep moving until there are no winning combinations. Depending on the number of consecutive wins, pig symbols will be turning into wilds to help you win bigger and sweeter.

An original product of Williams Interactive (WMS), the Colossal Reels system was originally introduced into the brick and mortar gaming landscape across the United States. Colossal Reels have brought forward a gigantic wave of change within the slot gaming industry, reshaping the mindset of both developers and operators.

What Are the Colossal Reels?

Games which pack a colossal reel set are significantly different to classic slot game that feature a standardized reel set of 3 or 5 reels on a grid. The Colossal Reel structure is significantly different as it will expand the basic gameplay to either two separate 5-reel sets one of which will have the classic number of three rows, whereas the other – colossal one – will have 12 rows of action.

The colossal reel grid will not only bring a visual change to your playing screen but it will also introduce a set of game-related tweaks such as Stacked Wilds appearing on all reels of Wild transfer from main to colossal reel set.

Where to Find Colossal Reels?

Initially, an exclusive brick-and-mortar casino product, Colossal Reels slot games can today be found at a number of online establishments which are powered by WMS. As a reputable name in the online gaming sphere, WMS boasts an extensive reach and supplies quite a number of online casinos with its products. 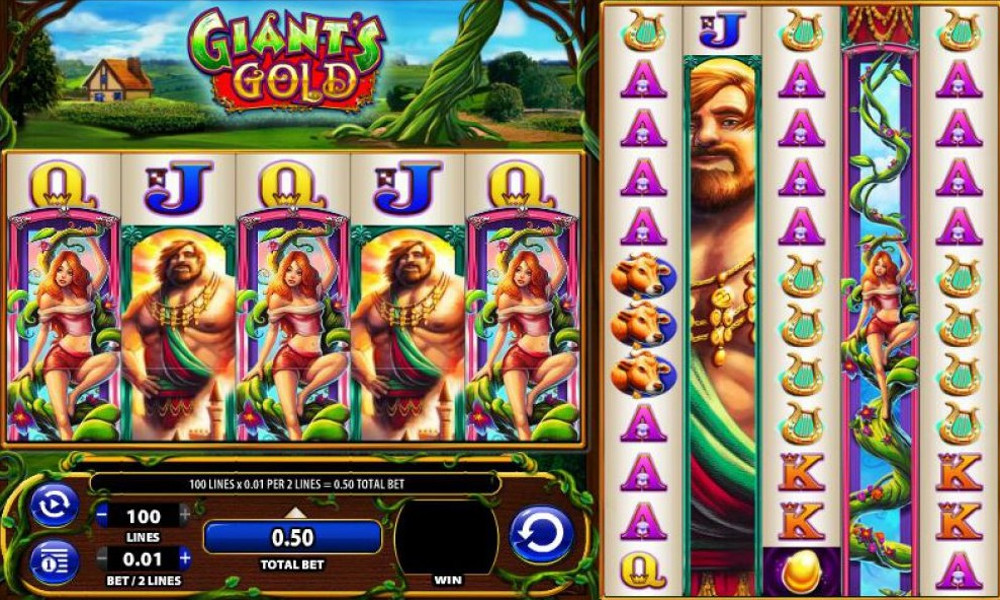 A double reel playing set with a main (5×4) plus colossal (5×12) grid makes Giant’s Gold quite an attraction. This 100-payline slot title revolves around a popular Jack and the Beanstalk title – with a little twist – inside a rather dynamic game setting. It comes with a Free Spin feature and a 2x multiplier available on the colossal reel set for some possibly generous payouts.

This game is another great example of the identical 5×4 + 5×12 playing grid which powers up 100 paylines. This Greek mythology title rewards players with up to 12 Free Spins and a whopping 20x multiplier with transferring Wilds shifting from the main panel to the colossal one.