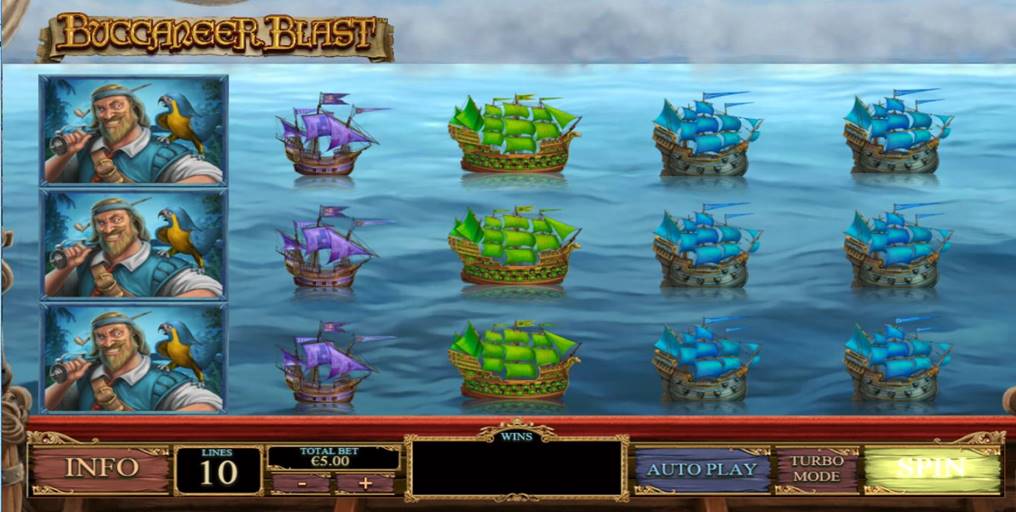 Get your share of up to 3000x your stake booty with Buccaneer Blast, the latest pirate-themed slot from Playtech.

Are you brave enough to risk walking the plank in this medium to high variance slot?

The game features three pirates, each bringing a different reward. Furthermore, they will try to take control of the seven seas, using any means necessary to claim victory. You are welcome to join them on this adventure across mobile, desktop or tablet for as little as £0.10 to £500 per spin.

Do not be intimidated by the cannons and their thunderous echoes on this 5 reel, 10 paylines slot. When they fire from each of the three ships during the Ships Run Wild Feature, the low-win symbols will be transformed into 2x wilds when the cannon is fired on the second or fourth reel.

Buccaneer Blast Feature is another dramatic feature that will be triggered when a black pirate ship randomly appears above reel 3. The reels will then spin again for free with 3 cannons appearing beneath the reels. Firing randomly, they will leave wilds in the hit positions, leading to up to 3 wild reels per respin!

Buccaneer Blast Packs quite a punch – with the win both ways technology, you can win 300x your stake for a 5 of a kind winning combinations with the red pirate. You can win even a whopping 3,000x your stake with the added two bonus features when you fill the reels with him!