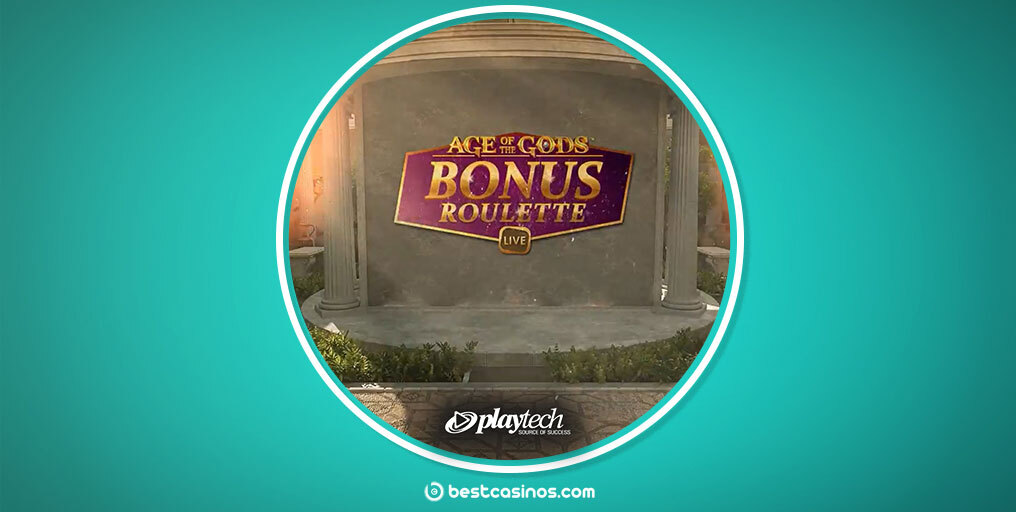 Playtech continues the legend! The innovative game developer has dropped a massive hint about a new live casino table release that’s arriving this week. And guess what: the game is a continuation of the popular franchise that Playtech has.

The new game will have a brand-new Bonus round that will surely bring in an element of refreshment. If you liked Age of Gods Roulette Live, we have no doubt you will love the new game. We compiled a detailed analysis of the game and listed items that we could potentially see in the new game. Read on to find out more about the game and the Age of Gods Bonus Roulette casinos where you can play for real money!

Age of Gods Bonus Roulette is a live dealer table that Playtech plans to release. From the look of it, it is supposed to build on the established Age of Gods Roulette.

We will discuss the similarities and differences between the two tables in the next section, don’t worry. For now, here we will focus solely on the new title.

The game is a standard European Roulette variant with a single zero.

Playtech even called the game an Age of Gods Roulette Live Reloaded with more entertainment. Moreover, players have a chance to win up to 300x the stake in the Bonus Round. The previous table had this feature as well, which has the maximum Multiplier potential of 100x.

Table limits, along with other game specs, remain unknown. We will have to stay patient for the game to appear in our favourite casinos in the next few days.

The original Age of Gods Roulette live table and this game have a lot of things in common. For starters, they have almost identical names – the ‘almost’ referring to the Bonus addition to the new game title.

Essentially, they are both European-style live Roulette tables, which means they are using a single zero and 36 pockets.

Moreover, the Bonus round that we repeatedly mention is both a similarity and a difference. While the first game included a revolutionary Bonus Round – and progressive jackpots – this one will too. But it is important to note that the regular variant featured the Bonus round, the live variant did not. This one will be the best of both games!

While we are waiting for the game to drop, it could be useful to revisit the first game and brush up on our knowledge.

The original Age of Gods Roulette table had a special Bonus pocket on the Wheel. If the ball landed in this pocket, it would activate the bonus slot game with three spins.

The point of the bonus round is to land three matching icons of the game to win a Multiplier. Multipliers in the previous game ranged between 5x and 100x.

In this new game, the game developer stated that the new Bonus round produces up to 300x wins. That sounds amazing, especially as it is three times bigger than the original Bonus win!

Our best guess is that the game provider will use the same method to incorporate the new Bonus round into the game. This is, after all, a live Roulette table, so adding extra pockets to the wheel would be a great option. However, there is also the question of the house edge to consider. The original game has a 5.2% house edge, all thanks to the extra Bonus pocket on the wheel.

How to Play Age of Gods Bonus Roulette

When the game drops, one of the first questions that we would ask is how to play Age of Gods Bonus Roulette. However, thanks to its similarity to the previous title, we are confident there would not be grand changes.

In the previous game, betting limits varied for betting options. However, the minimum bet requirement was always €1, while the maximum bet went between €50 and €1,000.

Moreover, this is a European Roulette table, which means the rules are fairly easy to learn.

Before the start of the round, players place bets on desired spots on the table. The dealer will then spin the wheel. When the wheel stops in a certain pocket, players receive automatically receive their winnings.

You can wager on Straight Up, Split, Street, Corner, Line, Column/Dozen, 1-18/19-36, Red/Black, and Even/Odd bets. Moreover, the table allows you to bet on Voisins du Zero, Orphelins, Tier, and Neighbours.

Where to Play Age of Gods Bonus Roulette

Just like the Age of Gods Roulette table and its live variant, this one will surely appear in all popular Playtech casinos. We do not doubt that William Hill will be the first casino to add it to its exclusive lobby.

Remember that this is a live dealer table, which means it won’t be available for free play. Instead, you can enjoy Age of Gods Bonus Roulette live at all Playtech casinos for real money.

Stay patient, because the third and most exciting version of Age of Gods Roulette is arriving soon. We will keep you posted about new info and details as regularly as possible.