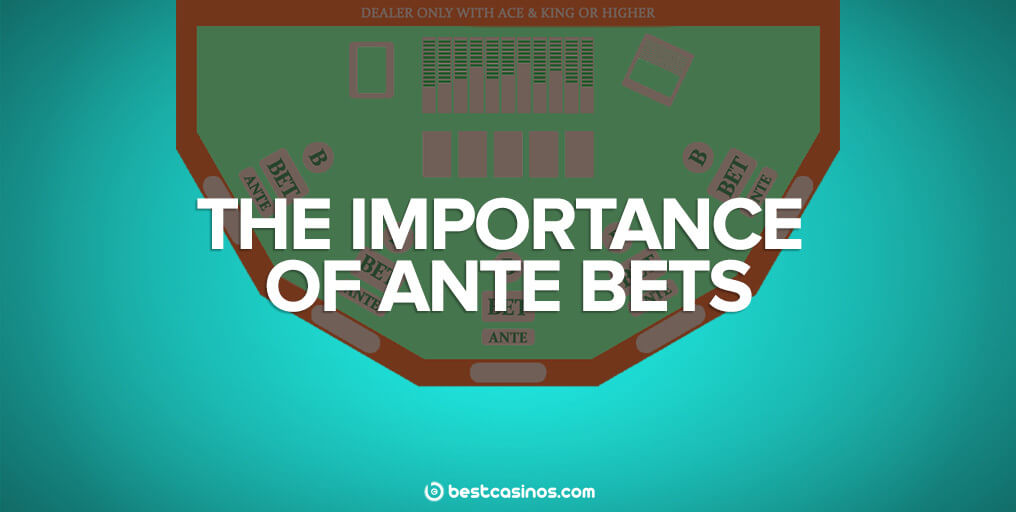 An Ante bet is a forced poker bet all players must place before the game starts. It is usually the same for all, which means all punters must chip in with the same amount. Ante bets are common in classic stud poker games, but they are not imperative in all poker variants.

BestCasinos.com investigates why Ante bets are so important and what to do with them in today’s article. We also answer common questions relating to differences between ante and blind bets and raise the poker’s ante.

What is an Ante bet? An Ante bet is a binding bet reserved for the beginning of the round. Before the dealer (real or RNG) deals the cards, all participants place the wager as a sign of their participation. All ante betting cash goes into the same pot, and they all must pay an identical amount of cash. The amount is predetermined and applies to all parties involved (i.e., players).

Why do such bets exist, we hear you ask? Well, it’s easy. Before the start of a game, the table requires a pot, and antes secure it. In each round, punters add funds to keep the game afloat (commonly known as seeding the pot). There is also the question of keeping as many players as possible in the game.

Here’s an example. If all players pay Ante before each deal, folding will mean they are guaranteed to lose funds for the hand in question. Folding deal after deal results in a proven loss, which all punters want to avoid. Therefore, antes serve as incentives for players to stay in the game and keep playing. Big pots, better pot odds, and lower calls with more opponents make for a better gaming setting.

The unpredictable nature of poker dictates the pace and rules you can find at various tables. As you know, there are many variants of the game, both in land-based and online poker.

How to Play Poker Online with Ante Bets

If you grab a seat at a poker table that features this kind of wager, there is little you can do to avoid it. In fact, you cannot avoid it – it’s one of the forced poker wagers. Hence, any advanced or secret poker strategy is of no use for this type of betting.

While Ante bets can affect the flow of the game, they never affect the rules. In fact, poker games with this wager have identical rules as tables lacking it – unique variant rules excluded, of course.

So, here is a step-by-step process of playing Ante bets in poker:

As you can see, the only difference is that you get to place this small wager to seed the plot and ensure you’ll participate for as long as you can.

All players pay the set amount. In that regard, all participants pay identical amounts as their opponents. However, the amount throughout the round might not be the same. You will also see ante increasing or decreasing as the game progresses. This has to do with the ‘up the ante’ rule many tables used in the game’s final stages.

Certain tables and certain tournaments use the rule where players up the ante before every deal. A single round may feature several hands, and each requires a slight increase in the ante betting amount. In that sense, you can raise the ante or up the ante if the table rules require that of you. If not, you cannot.

The amount depends solely on the table in question. Most variants that feature this wager set it as 10% of the big blind wager. It can also be the minimum bet or half or a quarter of the smallest bet limit.

The most common variants to feature such a wager are stud and draw poker. We’ll talk more about that in the next section, where you can find the best ante poker games. A common rule is that tables with blinds do not have antes and vice versa. It’s not an obligatory rule, though.

The most common variants which feature this forced bet are Stud and Draw variants. However, that’s still broad for players, especially those who are new to the whole scene. The following games are live poker variants with ante bets and various other side bets and features. They all come from top-rated providers who are known to deliver only the best quality content.

Three Card Poker is one of the most popular variants in UK casinos. Evolution, one of the biggest live casino content providers, stands behind this magnificent release. As soon as it launched, the table became a favourite choice for punters seeking premium entertainment and top poker play. With Queen High as your goal, each deal is fast-paced, invigorating, and fun.

Evolution’s sister company Ezugi is another master in creating live content for online gambling sites. Its Casino Hold ’em table has attracted millions of players worldwide, and only a few other tables surpass it in popularity. If you like unusual providers dedicated to quality, don’t miss Ezugi Casino Hold ’em in our recommended casino below.

Blinds, Ante, Play wagers, and raising antes – why not? Evolution teamed up with Scientific Games to deliver an ultimate live poker experience. And they did it! The Ultimate Texas Hold ’em features a wealth of features, including blinds and antes.

What Is the Difference Between Ante and Blind?

This is by far the most common question about antes. Players often confuse the two because they are quite similar, but a few distinctions are vital for the game.

Both are forced bets, meaning they are compulsory for every player in every round. They also take place at the beginning of each round. However, the main difference between them is that antes apply to all participants, while only one or two players pay blinds.

Let us explain. Blinds are wagers usually happening right after the dealer deals the cards. Once the cards are dealt, one or two players playing first place the blind. There are two different blinds – the big blind and the small blind. These rotate as the dealing turn rotates around the table. Some tables include blind increases, i.e., the amount required can grow in later stages of the game (or tournament phases).

The world of poker is a diverse ecosystem of variants, rules, and superstitions. Such an abundance of content and gaming material has led to a surplus of rules and features, one of which is the Ante Bet.

BestCasinos.com did its best to bring the concept of Ante betting closer to you and show you how ante bets affect gameplay. If you have any questions or decide to share thoughts with us, drop us a comment below!