The first game with which 4ThePlayer’s studio introduced itself to the global industry is 9k Yeti. And let us tell you, it was a grand introduction! When it first came out, 9k Yeti brought on a 6×4 reel grid with amazing potential. Players were offered a chance to win up to 9,012x the stake – hence the name 9k Yeti. If you want to play it, you can find it in any Yggdrasil Gaming-powered casino site. The company behind the game is one of YGS Masters studios.

When it comes to the features, 9k Yeti will not disappoint you. There are two icy features to look out for – Snowstorm and Snowstorm Free Spins. The Snowstorm is there to help you win even if you have a losing spin. When it comes to Free Spins, the slot allows you to retrigger the feature up to a total number of 880 extra rounds.

The developer bolstered this video slot with high volatility and a fantastic 97% RTP. Imagine that! A great start of the company’s career is marked with this mobile-first slot too. You can enjoy it across any device that you like for only €0.10 per spin. The maximum bet is €25. You can also use the 4,096 winning ways to score a win that’ over 9,000x the stake. 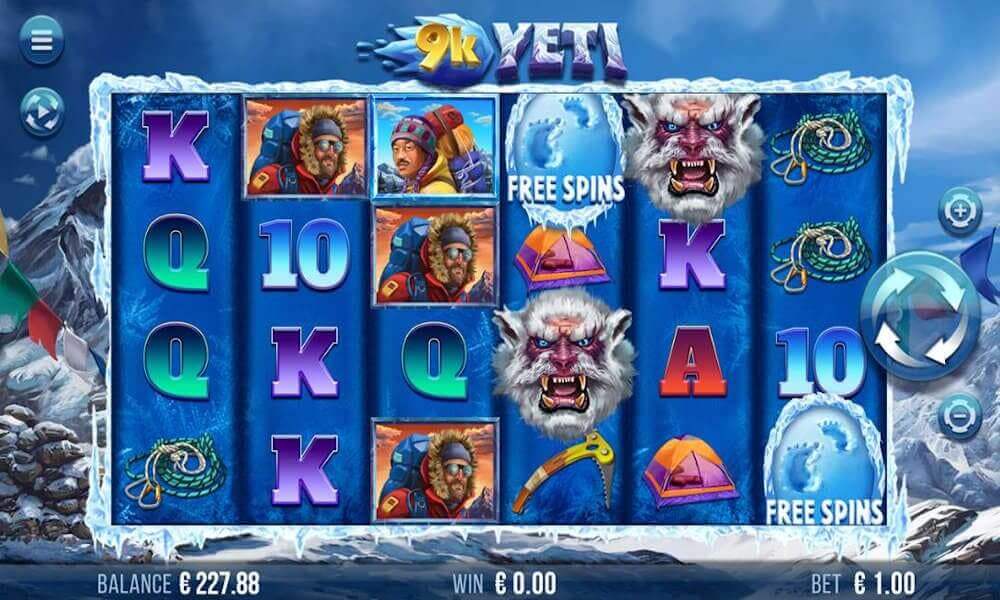 HOW TO PLAY 9k Yeti?

The 9k Yeti is a great conversation starter for 4ThePlayer. The up-and-coming game producer needed a slot that would launch its career in the best way possible – by making waves. And the waves it made! This 9k Yeti slot is an icy adventure that takes on the legend of Yeti as its central theme. An interesting choice of theme is not the only thing that attracted us to try it out. When we opened the game, we were surprised by the quality of graphics that the company showed off here. Keep in mind that this is not a regular video slot, though. 4ThePlayer wanted an attention-grabbing slot to kickstart its career, and this game is precisely that.

As we already said, the grid comes with 6 reels and 4 rows. Thanks to its big grid, the game allows you to enjoy 4,096 ways to win. In other words, you have thousands of ways to trigger the main prize, which is 9,012x the stake. Speaking of stakes, you can invest a sum between €0.10 and €25 for each round. Although we are almost used to the maximum bet of €100, the new developer decided to cut is shorter than usual. But we are not complaining.

As a mobile-first game developer, you can bet that 9k Yeti is perfect for mobile playing. It even boasts a Big Reel Portrait Mode which takes up 60% of your mobile screen. And the reels spin right to left, instead of top to bottom! The final thing that we’d like to mention is the symbol set. The lower set is a mix of card royals, while the higher-value set includes climbers, tents, and ice picks. You know, the usual icy-mountain-climbing paraphernalia.

The 4ThePlayer trailblazer offers 2 unique features to the players. Use them to jazz up the experience, as the base game offers no such boosters.

A small-scale game developer with big dreams that is 4ThePlayer needed something eye-opening for its debut. Thankfully, the team of experts that created this game knows its business quite well. That is how 9k Yeti turned out to be a marvellous slot release in 2019.

There aren’t many features, but those that are here are more than enough. Trigger up to 880 spins or enjoy watching your losing spin turn into a winning sequence – it’s up to you. You can also do both, because why not!

The game’s use of Big Reels Portrait mode enables you to enjoy the full splendour of 9k Yeti on your mobile phones. The Yggdrasil-powered game is available in all Yggdrasil online casinos. The maximum payout potential for 4ThePlayer’s debut release is 9,012x the stake.

WHERE TO PLAY 9K YETI FOR REAL MONEY:

Players, we need your help with how we should to rank and rate these reviewed casino games. You can help us by rating this game, and if you really enjoyed playing 9k Yeti. You can also share it with your friends on Facebook, Twitter and via email. For all freeplay games, if your free credits run out, simply just refresh the page and your balance will be restored.

See all of our Slots game reviews where you can play 557 slots games for real money in any of our recommended casino sites.

6 Wild Sharks
You can tailor your experience to your tastes here, and that includes betting limits ...
Software:
4ThePlayer
Reels:
6
Paylines:
4,096 Ways to Win
RTP:
96.5%
Volatility:
High