Each month, Quickspin graces its loyal fans with another one of its impressive video slots. August 2020 is marked as the month in which we got to meet Artemis Vs Medusa, a 5×5 video slot inspired by Greek mythology. The video slot joined the ranks of thousands of Greek-themed slots that bring amazing casino entertainment to the players’ screens with 5,288x wins.

When it comes to special features, Artemis Vs Medusa light up the slot like a Christmas Tree. There are four special features that you can trigger in the game. Monster Coin Bounty can appear on any medium symbol in the base game. If an Artemis with a Golden Frame appears, he will collect the bounty from all Monster Coins. This feature bears the name Monster Bounty, because Artemis needs funding for his battle with Medusa. The final clash happens during the Free Spins mode where you have an unlimited number of Free Spins to resolve the battle.

The game is a medium volatility slot that can bring you an enormous fortune. Use the 1,024 winning ways to score the maximum potential win of 5,288x the stake. This epic battle offers 96.17% RTP for users on desktop and mobile devices. As soon as you enter the game, you will notice that the default bet is €1, but you can lower it to €0.20 or crank it up to €100. 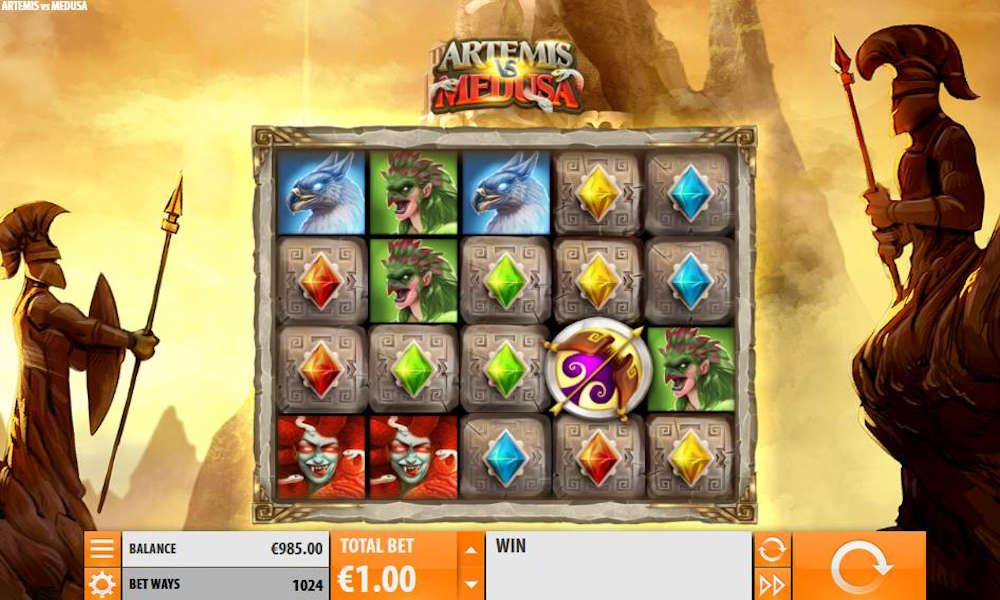 HOW TO PLAY Artemis Vs Medusa?

It seems that Greek mythology is quite popular nowadays. More specifically, Medusa is the star of August, as Yggdrasil also released its Medusa: Fortune & Glory slot recently. For the fans of this theme, this slot will be an eye-candy. The team behind Quickspin’s visuals is responsible for bringing this epic-mythology-fantasy to our game screens. The base game depicts a background of mountains and stone guards that are protecting the skies. Once you get into the Free Spins battle though, the scenery changes, you will transfer to space, right between famous constellations. An epic battle indeed will ensue.

Quickspin brought the entire opus of Greek mythology to the reels. Griffons, Minotaurs, Harpies, and Artemis make the high-paying icon collection. Besides these legendary creatures, a gem collection fills the spaces on the reels as low-paying symbols. It’s interesting to note that the game also offers several special icons. For instance, Artemis appears as a regular symbol and as a special one boosted with a Golden Frame. This special symbol triggers one of the game’s prized features. There is also a Wild and a Scatter that you will recognize as golden antlers and a golden bow.

On the technical side, the game boasts great potential. It’s not exactly volatile – we’re talking medium volatility here – and there’s 96.17% RTP. As far as our spinning goes, we noticed that there aren’t many wins unless you score the Monster Bounty Coins. To get a prize worth mentioning, aim for a golden-framed Artemis that collects the bounty. The minimum bet is €0.20, while the maximum is €100.

Artemis Vs Medusa is a grand battle fought between Artemis and the monster Medusa. Your task is to help Artemis defeat the nasty snake-haired Medusa. Here is how you can achieve that:

Artemis Vs Medusa is a Greek-themed video slot from Quickspin that recreates a cosmic battle in the skies. You can win a lot, regardless of the winner. The maximum payout potential that Artemis Vs Medusa offers is 5,288x the stake.

In the base game, you might notice that some icons bear a small coin in the corner. This symbol is the Monster Coin Bounty, and if Artemis with Golden Frame appears, you can collect it. If three Scatters drop on the reels, you will transport to the skies where an epic battle occurs within unlimited Free Spins.

To play the game, expect to invest a bet between €0.20 and €100. It is available both for desktop and mobile devices, just like all other Quickspin video slots. It’s a decent game thanks to its great payouts and medium volatility. And if you like the theme, even better.

WHERE TO PLAY ARTEMIS VS MEDUSA FOR REAL MONEY:

Players, we need your help with how we should to rank and rate these reviewed casino games. You can help us by rating this game, and if you really enjoyed playing Artemis Vs Medusa. You can also share it with your friends on Facebook, Twitter and via email. For all freeplay games, if your free credits run out, simply just refresh the page and your balance will be restored.

See all of our Slots game reviews where you can play 597 slots games for real money in any of our recommended casino sites.

PLAY ARTEMIS VS MEDUSA AT THESE TOP RECOMMENDED CASINOS

Goldilocks
This fun filled slot game is based on the popular children’s fairy tale and it ...
Software:
Quickspin
Reels:
5
Paylines:
25
RTP:
97.09%
Volatility:
Medium