Egyptian Dreams Deluxe is one of the latest additions to the ever-expanding portfolio of ancient Egypt themed video slots powered by Habanero. Taking you into a proper adventure this 5 reel and progressive jackpot title is bound to bring endless fun and life-changing payouts to those who dare to face the Pharaoh.

Habanero did well to equip this slot game with an innovative gameplay and a wealth of bonus features which bring plenty of winning possibility. Egyptian Dreams Deluxe is played on the 243 winning ways system which expands to whopping 3,125 when two rows of hidden symbols expand the grid from 5×3 to 5×5.

This slot game comes with a rather wide betting range which makes it a perfect choice for both gaming enthusiasts and highest of rollers. With an RTP of 96.70% this high variance game carries a 100,000 coin jackpot and three progressive pots – mini, minor, and major. 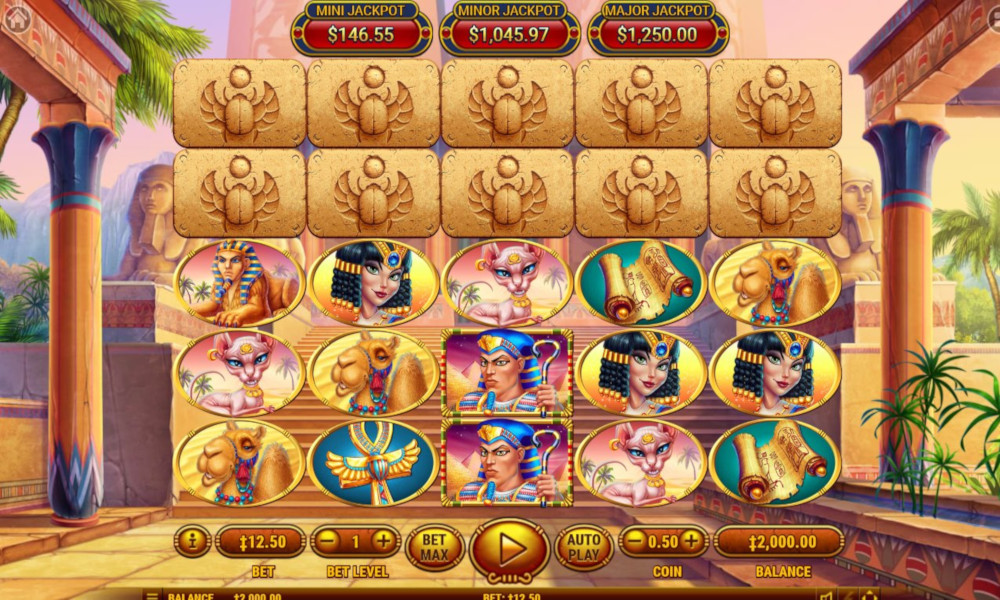 HOW TO PLAY Egyptian Dreams Deluxe?

Insanely appealing thanks to great work from Habanero’s creative department, Egyptian Dreams Deluxe is a magical presentation that carries a special allure. Some would perceive it a trap knowing that this high-volatility game can drain your budget really easily so before you start hitting the spin button you’d better made sure the betting range is set to what you can afford.

You can go from as low as €0.25 per spin up to whopping €5,000 which is the upper limit high rollers will enjoy. For a progressive jackpot title, Egyptian Dreams Deluxe sure has a place on the grid for any type of players and that’s the most important thing.

Playing this game is super easy. Your aim is to line up at least three matching symbols – all of which are traditional Egyptian symbols – in one of the winning lines in order to land a win. The game is powered by a genuinely exciting gameplay, though, with two upper reels consisting of hidden symbols which will be unlocked to add more winning ways – up to 3,125. Hidden symbols will be revealed every time you land a Wild Pharaoh underneath a locked Scarab. Not only will unlocking of all Scarabs add more bet lines but it will allow you to enjoy Free Spins, but more on it below.

This Habanero gem comes with an AutoPlay button if that’s your cup of tea. Egyptian Dreams Deluxe is truly a fantastic game which can be enjoyed to an equal extent across all devices and platforms.

Tip of the hat to Habanero who have done a remarkable work to pack this slot with plenty of exciting features. The unrivaled Progressive jackpot Bonus is complemented by Re-Spins and Free Games which is hopefully not more than what you can take.

Unlock Feature – Pharaoh Wild is directly responsible for unlocking the hidden symbols in the game. Once it’s placed underneath the Scarab, a new symbol will be revealed to boost your chances of winning. Should you manage to unlock all Scarabs in the base game, you will be rewarded by 30 Free Games.

Re-Spin Feature – if you get 2 to 4 Pyramid Bonus Symbols on the grid from left to right, the game will reward you with a re-spin feature. During the re-spin the Pyramid symbols will be locked in place with new ones adding more re-spins. Think that’s all? Depending on the number of Pyramid symbols, the players will also be rewarded with Free Games – either 10, 15, 20 or 30.

Free Spins Feature – the maximum 30 free games are awarded when you land all five Pyramid symbols on the reels. In case you land 3 or more Pyramids during the feature, additional 10 free games will be added to the tally. When this feature ends, all Scarabs from the upper two reels – the hidden ones – will be restored to their initial state.

Progressive Jackpot – is random. It can be won at the end of any game whatsoever. Naturally, the higher your bet amount, the bigger a chance of triggering it. Progressive Jackpot wins are added on to of your other wins and come in three forms:

When it comes to Egyptian slot games, it is fair to say there is hardly a different subject that’s been that exploited and used. There are countless of ancient Egypt themed slot games out there so what is it that makes this one from Habanero that different?

It is the company’s determination to create both a visually appealing and engaging product. In the end, it can be said Habanero did it. Not only does Egyptian Dreams Deluxe look good but it’s also a game filled with everyone’s favourite features.

Symbols unlocking reels and increasing the number of winning lines is just the start. Re-Spins, Free Spins and a three-way Progressive Jackpot must be more than enough of an enticement to get you to play – and for hours once you start.

WHERE TO PLAY EGYPTIAN DREAMS DELUXE FOR REAL MONEY:

Players, we need your help with how we should to rank and rate these reviewed casino games. You can help us by rating this game, and if you really enjoyed playing Egyptian Dreams Deluxe. You can also share it with your friends on Facebook, Twitter and via email. For all freeplay games, if your free credits run out, simply just refresh the page and your balance will be restored.

TRY THESE OTHER Habanero GAMES

Gold Rush
Gold Rush is one of the thrilling slot games that has been created by Habanero and ...
Software:
Habanero
Reels:
5
Paylines:
25
RTP:
98.10%
Volatility:
Low

Rolling Roger
Rolling Roger is a visually thrilling game that has been created by Habanero and ...
Software:
Habanero
Reels:
5
Paylines:
25
RTP:
97.95%
Volatility:
Low

London Hunter
London Hunter is one of the new video slot releases to be offered by Habanero and ...
Software:
Habanero
Reels:
5
Paylines:
25
RTP:
96.80%
Volatility:
High