Hall of the Mountain King

Hall of the Mountain King is a 5 reel and 20 payline video slot available at all Quickspin-supported online casino establishments. This is a feature-packed fantasy theme bound to trigger your imagination and tingle your sensory impulses.

Inspired by the musical masterpiece titled In the Hall of the Mountain King, this video slot puts otherwise unimaginable substance behind Edvard Grieg’s creation. Initially released exclusively for LeoVegas Casino players, this game went fully live in May 2019.

This high-volatile online slot is packed full with intense features. Adrenaline-boosting assets such as multiplier meters, free spins and level-play go nicely along the music, bumping up excitement levels accordingly. 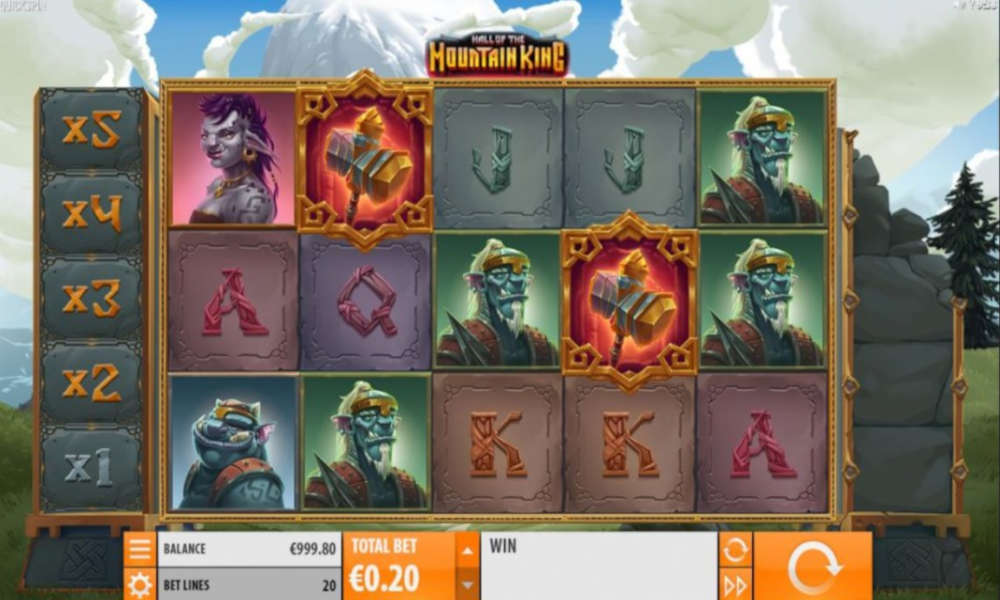 HOW TO PLAY Hall of the Mountain King?

Hall of the Mountain King slot game comes with impressive visuals. This is the first thing you notice as you approach the stone-built gates. Surrounded by stone columns, five reels come with 3 rows. The symbols within are decorative playing card symbols as low-value denominations. Furthermore, we have a group of artistically designed ogre-like creatures, some of which slightly resemble Avatars.

When it comes to playing this game, all you need to do is to line at least 3 matching symbols on a payline from left to right. Along the way, you will have a golden W symbol acting as Wild, helping you create winning combinations more easily.

Before you start spinning the reels, make sure to adjust the total bet value. Quickspin have a wide range of available values which makes this game available to a wide audience of players. Possible jackpots you can benefit from go over 7,000x the jackpot.

Hall of the Mountain King is as exciting as it gets. Quickspin made sure to live up to expectations by producing a feature-packed gameplay. This game is designed to slowly build up anticipation and excitement with its multitude of video game facets.

Multiplier Meter – let’s start from the most obvious thing here. On the left side of the reels you will see a multiplier meter going up to 5x. Each Wild symbol you land will activate one of these multipliers which applies to all wins. These multipliers increase during the Free Spins Bonus – going up to 15x.

Smashing Blocks – before we move to the Free Spins bonus where all the magic happens, a feature called smashing blocks needs to be explained. A Bonus Block is indicated on each spin – in succession, from bottom to top. On any win, the King will smash the indicated bonus block, in order to trigger its corresponding feature. The King will also smash the bottom multiplier blocks, thus incrementing all multipliers. Once the top block is smashed, the game moves into the next stage.

Free Spins Bonus – three Hammer Scatters will trigger this bonus. It consists of three different stages, each holding a unique feature. The first two stages, however, also come with a Bonus Meter. In Stage 1, this bonus meter contains Symbol Upgrade blocks, while Whirling Wild blocks are there in Stage 2.

Just as any other video slot from Quickspin, the Hall of the Mountain King is an elaborate creation. It’s clear from the off that the good people at QUickspin spent hours and hours deliberating the gameplay, visuals and the storyline. The final product is as close to perfection as one gets.

Visually impressive, this 5 reel and 20 payline video slot boasts an identically beautiful gameplay. This game is packed with all sorts of engaging features which include increasing multipliers (up to 15x), Whirling Wild collections, and free spins where you can claim over 7,000x your bet.

Mind you, this is a high-volatility slot game. Players be advised to tread carefully into the mountain as it can run you dry of coins before you even know it. Luckily, Quickspin have equipped this game with a number of available bet levels so all of you can enjoy it – and do so on any device imaginable as well.

WHERE TO PLAY HALL OF THE MOUNTAIN KING FOR REAL MONEY:

Players, we need your help with how we should to rank and rate these reviewed casino games. You can help us by rating this game, and if you really enjoyed playing Hall of the Mountain King. You can also share it with your friends on Facebook, Twitter and via email. For all freeplay games, if your free credits run out, simply just refresh the page and your balance will be restored.

PLAY HALL OF THE MOUNTAIN KING AT THESE TOP RECOMMENDED CASINOS

Flip Royale
Quickspin is getting ready to release a new slot on the 14th of June. See what you ...
Software:
Quickspin
Reels:
5
Paylines:
10
RTP:
96.19%
Volatility:
Low

Durian Dynamite
A fruit salad with a delicious twist is perhaps the best way to describe one of the ...
Software:
Quickspin
Reels:
5
Paylines:
20
RTP:
96.22%
Volatility:
High

Skulls UP!
If you are a fan of pirates and rich pirate lore, you are going to love Quickspin’s ...
Software:
Quickspin
Reels:
5
Paylines:
243 Ways to Win
RTP:
96.26%
Volatility:
High