Quickspin invites you to join the robots and prevent the ‘astrocalypse’ in their thrilling Warp Wreckers Power Glyph online slot. The game features exploding cloned robots that create energy orbs. These orbs then activate boosters in cluster bombs! Warp Wreckers is a feature-rich slot that brings both action and wins.

The game boasts an incredible set of game features, including Power GlyphsTM and the new Erase-3 mechanics. A first for Quickspin, Erase-3 mechanics means that 3-5 matching symbols anywhere on the board count as wins and get removed.

This robotic-themed slot is played on a 5×5 grid and features a tumbling mechanic. The game is playable for a minimum bet of €0.20, and a maximum of €100 per spin, catering to all bankrolls. The Warp Wreckers online slot features a 96.29% RTP, which is slightly above the average for an online slot. The maximum win potential Warp Wreckers slot offers is 4,500x the stake.

Are you brave enough to immerse yourself in this sci-fi mission? If the answer is yes, keep reading our Quickspin Warp Wreckers review to see where to play, and what else to expect from this futuristic slot. 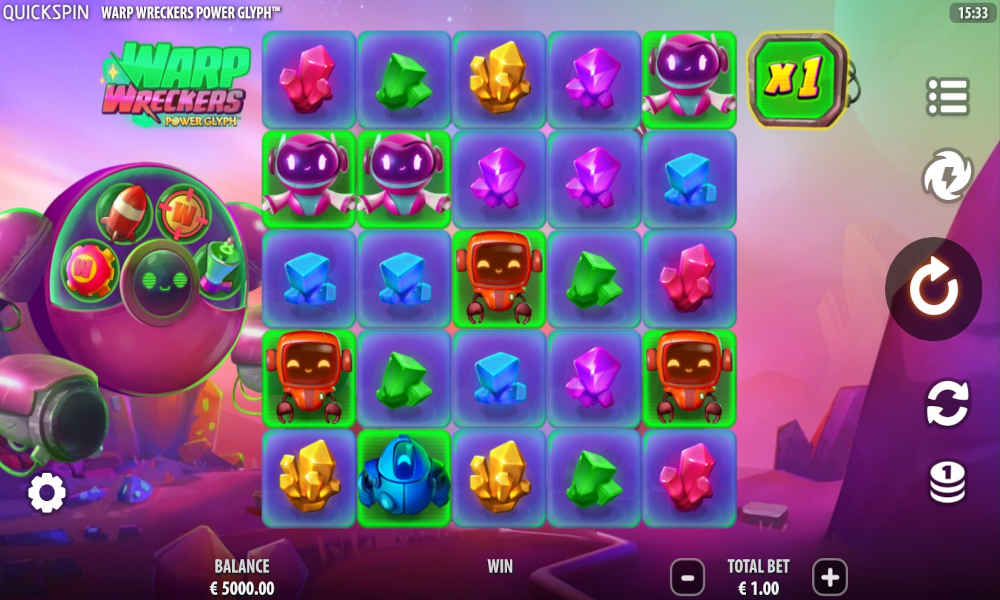 HOW TO PLAY Warp Wreckers?

The game features a sci-fi theme, where players will find themselves on a planet with all sorts of different robots created to save their planet. There are rocks with a purple glow covering the area in the background. On the left of the grid stands a giant robot loaded with Power-Ups. Players can take home big prizes if they create a winning combination by landing 3 or more of the same symbols on a straight payline, where these can be created horizontally across the reels. When you create a win, the symbols that were part of the winning combination disappear, while the new symbols fall down. This will continue until no more wins are created.

The lower-paying symbols appear as blue, green, violet, red, and yellow crystals. If you manage to land 5 of the same symbol, you will get 2x to 4x the bet. Robots in the colours blue, pink, and red will offer a bigger payout with 10x for the 5 on the reels. Additionally, you can land a mixture of these robots and get 5x your stake.

The highest paying symbols are the Wild symbol, and the Power Glyph symbols, where 5 on the grid will give 50x the bet. During the spins, you can also see an angry and flaming robot, who is a Destroyer symbol. We will talk more about these symbols later in the Warp Wreckers review.

Time to see what these extra symbols add to the overall gameplay.

These extra features really add to the dynamic and thrill of the game. Combined with a max win potential of 4,500x the stake, we do not see a reason not to give Warp Wreckers slot a shot.

With a ton of interesting features in the Warp Wreckers Power Glyph slot, it is easy to lose the hang of what is going on at any time. But once you get used to the fast-paced gameplay you will see that the game is easy to like.

Warp Wreckers is a fun addition to Quickspin’s Glyph range of games. It successfully combines Power-Up Stack features with the Erase-3 mechanics. Plus the grid clearing objective adds to the game being a nice package.

The graphics are fantastic and the soundtrack really adds to the overall atmosphere. Quickspin slots do seem to follow a similar pattern at times, but here there is enough individuality to keep players coming back. With 4,500x max wins and an above-average RTP, you will definitely not be disappointed if you give this slot a try.

WHERE TO PLAY WARP WRECKERS FOR REAL MONEY:

Players, we need your help with how we should to rank and rate these reviewed casino games. You can help us by rating this game, and if you really enjoyed playing Warp Wreckers. You can also share it with your friends on Facebook, Twitter and via email. For all freeplay games, if your free credits run out, simply just refresh the page and your balance will be restored.

Goldilocks
This fun filled slot game is based on the popular children’s fairy tale and it ...
Software:
Quickspin
Reels:
5
Paylines:
25
RTP:
97.09%
Volatility:
Medium