You won’t be down too long in the midnight sea with Big Time Gaming (BTG) latest hit slot named exactly as that famed song by Ronnie James Dio. The Holy Diver we’re talking about here is a medieval adventure video game on a 6-reel grid and a powerful Megaways engine offering up to 586,972 ways to win.

Holy Diver takes you on a quest together with the animated Knight who is looking for ancient riches and an elusive Chest of Fortune. With 4 different base game modifiers, the three-tier Shield of Fortune bonus, Free Spins and a Diamond Retrigger, this BTG gem is both highly engaging and potentially rewarding.

Big Time Gaming fitted this video slot with a wide range of betting offers to make it available for a big audience. The spinning starts at €0.10 and goes not higher than €20. With a winning potential worth 23,000x the stake, Holy Diver will be of great appeal for both casual players and more experienced ones. 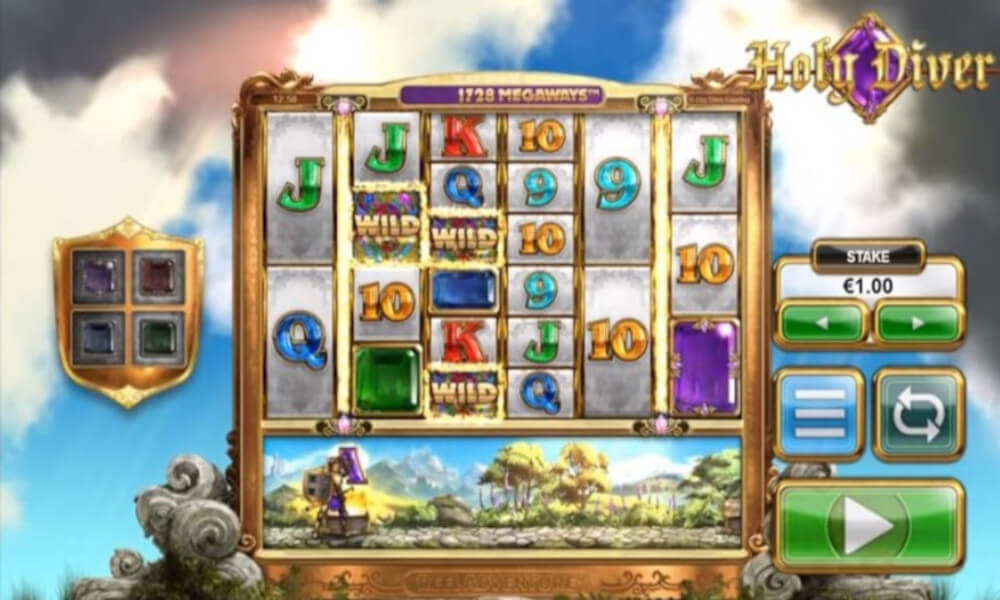 HOW TO PLAY Holy Diver?

Placed on top of the hill and surrounded by ancient-built columns, a 6 reel grid containing up to 7 symbols per reel is not all you get on your screen. The animated Knight is right below, on his path with the shield and sword in his hands. BTG has done great to create a visually impressive game which is basically a combination of classic video games and online slots. It’s the perfect example of slot gamification put to great use.

Symbols on the reels include classic playing card symbols – from 9 to Ace – which are joined by 4 different gemstones. Wins are awarded for combinations of adjacent symbols (regardless of their size) from left to right. Big Time Gaming have fitted this slot star with their trademark Megaways engine which increases the number of ways to win with each spin. There are three levels of Megaways you can benefit from:

Before you actually set the reels in motion and help the Knight take off on his treasure hunt, make sure to adjust the gameplay. The game controls are situated on the right side of the playing screen where you will determine the stake value and choose whether to activate the AutoPlay option or not.

This gamified product emerging fresh from the creative kitchen of Big Time Gaming is packed with all sorts of features and top-ups, intended to make your playing time as enjoyable and rewarding as possible.

Chests of Fortune – as you go along spinning the reels you will notice that the good knight is moving along the path, kicking open treasure chests to reveal one of four game modifiers. These are as follows:

Shield of Fortune – the gemstones you get during the Chest modifiers will be added to the shield which stands on the left-hand side of the reels. You can reveal (and collect) them all at once. This particular feature gives you an option to level up or collect the Free Spins feature.

Free Spins – as seen above, this particular feature can be triggered directly by collecting gems (or leveling up through all three tiers of normal gemstone-induced play). You will get a batch of 10 free spins to benefit from. During this feature, gems appearing on reels 2 through 5 will turn into wilds. These Wilds will carry a multiplier with different values depending on the level you are on – 2x, 3x to level 2 and 3, respectively.

Diamond Retrigger – during the Free Spins feature, our Knight will be collecting Diamonds as well. The first four diamonds add you a free spin each, while the fifth diamond he collects will throw in no less than 8 additional free spins and a retrigger. This retrigger will increase the number of symbols on the reels, thus pushing the number of Megaways up to the maximum 586,971.

When it comes to new and innovative, you can hardly go further than where Big Time Gaming takes us with its brand new Holy Diver slot game. It’s a product which could easily become as popular as Dio’s hit song due to its remarkably engaging – and equally rewarding – gameplay.

Holy Diver video slot is the perfect example of gamification put to a great use. It takes you through a story, following a brave knight on his epic journey. Join him and you will be rewarded with gemstones and riches beyond your imagination.

Big Time Gaming has also made sure to pack this game with its trademark Megaways mechanics which pushes up the number of winning lines to over half a million. It’s more than what you’d imagine in your wildest dreams.

WHERE TO PLAY HOLY DIVER FOR REAL MONEY:

Players, we need your help with how we should to rank and rate these reviewed casino games. You can help us by rating this game, and if you really enjoyed playing Holy Diver. You can also share it with your friends on Facebook, Twitter and via email. For all freeplay games, if your free credits run out, simply just refresh the page and your balance will be restored.

Book of Gods
Book of Gods is a thrilling game that takes players back in time where they can enjoy ...
Software:
Big Time Gaming
Reels:
5
Paylines:
243 Ways to Win
RTP:
96.35%
Volatility:
High