Sabaton online slot is casino tribute to the Swedish power metal band. Created by the premium provider of slot solutions Play’n GO, this game comes with 5 reels, 10 paylines and a gameplay packed with a heavy arsenal of features.

This fully branded slot game is another in a line of exciting music-inspired products. The nature of the band, however, dictates the tempo of the game which – it must be admitted – might be too strong for some. This here, however, is a high volatility game which is a fantastic homage to one of Sweden’s famous metal bands.

Sabaton carries an RTP worth 96.50% and boasts a remarkably hefty jackpot of up to 500,000 coins. With mystery symbols, randomly activated base game features, linked reels, mega symbols and free spins (to only name a few features) this game is bound to be a proper hit. 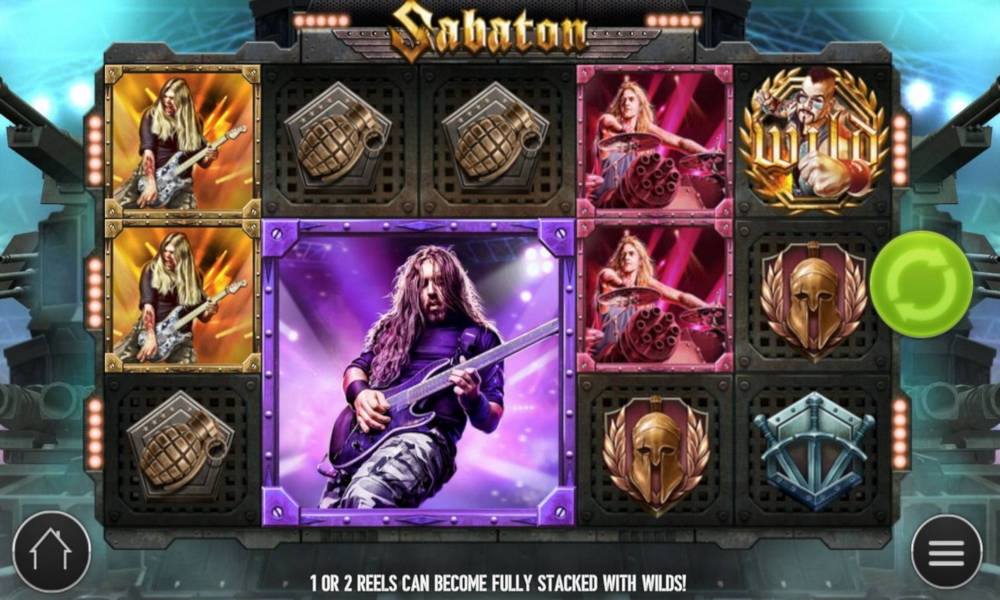 HOW TO PLAY Sabaton?

From the outset and onwards, Sabaton slot screams METAL! A proper tank parked behind the reel grid sets the tone straight up, whereas the likes of grenades, swords, bullets and Roman helmets – representing the low-value symbols – are maintaining the army-inspired pace.

The soundtrack is befitting to the theme. Powerful sound rocks on throughout the game with some of Sabaton’s famous tunes and audio snippets. The band members are there, of course, acting as royals. The lead singer – Joakim – is the game’s Wild, while he is joined by four of his comrades – Par, Hannes, Chris and Tommy.

The actual process of playing the game is rather simple. Once you go past the intimidating introduction and get accustomed to the sound of actual metal clangs on top of the heavy music, you will see that all you need to do is spin the play button and notch at least three matching symbols on a payline from left to right.

Prior to setting the reels in motion, make sure to choose your desired bet value. Play’n Go games have a rather straightforward way of choosing your preferred bet so simply scroll through the offered values – which start from €0.10 and move up to the maximum value of €100.

Sabaton online slot is more than great music and a heavy metal sound. It’s packed with intriguingly engaging features which will set your blood boiling along the rhythm of the music. Play’n GO packed it full with all sorts of goodies – some random and other specially triggered.

Last Stand – this feature will see one or two reels get randomly chosen and transformed into Wild reels. This feature is not only active in the base game but also during the Battalion Free Spins (more on which you’ll hear below).

Chained Reels – another randomly activated feature which is all about the Joakim Wild symbol. You will see two or three adjacent reels get synchronised to show the same symbols and thus increase your winning potential. This feature is only active during the base game.

Metal Stacks and Mystery Symbol – this is where a random symbols will be chosen as Stacked on each spin. The best thing about this feature is that the chosen symbol will replace the Scatter, every time it appears on the screen.

Mega Symbols – band members have the ability to display their power and expand to cover a large area of the screen or even the entire screen. Mega symbols can land on all reels and will significantly boost your winning potential.

Mega Scatter – the S symbol is the game’s Scatter. It can become a gigantic 3×3 Mega Scatter when three reels are linked. These Scatters will also trigger the Battalion Free Spins.

Battalion Free Spins – you need 9 or more Scatters in order to activate the free spins. You will get an initial batch of 7 free spins during which reels 2, 3 and 4 are linked together. Nine more Scatters will re-trigger the feature and the process is without limits.

Do you like music? Even more so – heavy metal music? If the answer is Yes then Sabaton slot by Play’n GO is just the game for you. Even if the answer is No, you are well advised to have a spin or two on this branded heavy metal tribute which pays great homage to Sweden’s heavy metal band.

Five reels and 10 paylines inside this expertly crafted game are the introduction to a feature-rich gameplay and an entertainment session that will leave no one indifferent. With a great variety of randomly triggered features and some more such as Battalion Free Spins, you are bound to get amused.

Furthermore, with a potential jackpot worth up to 5,000x your bet, Sabaton slot is here to reward you big time. Just crank the volume up and start headbanging.

WHERE TO PLAY SABATON FOR REAL MONEY:

Players, we need your help with how we should to rank and rate these reviewed casino games. You can help us by rating this game, and if you really enjoyed playing Sabaton. You can also share it with your friends on Facebook, Twitter and via email. For all freeplay games, if your free credits run out, simply just refresh the page and your balance will be restored.