Stacked slot is a 4×4 Betsoft video slot with 20 paylines, 96.39% RTP, medium-low volatility, and €99,645 maximum exposure. Stacked slot hit frequency registers as 39.83%, which in Free Spins bumps to 57.32%. Welcome to BestCasinos.com’s Stacked slot review where we display all the tricks Betsoft used in this magical slot. Get ready to see a show, as that’s exactly what Betsoft gives you with its majestic release.

Inside Stacked video slot, there are three main features worth mentioning. The Secret Trick adds several face-down cards to the grid to spice up the round. Behind them, you’ll find a plethora of surprises, and some might even add generous payouts to your bankroll. But that’s not all! Be prepared to win, but even if you lose, the magician has a solution. He can Fix the Trick by rearranging the reels to fit your needs better. And guess what is the solution? Yes, a Stacked reel of premium symbols which give you a cash boost. Finally, this wouldn’t be a magical slot without a bit of mystery. The Mystery Box is that sprinkle of uncertainty adding thrills to the show.

The game is a classic Betsoft, in all ways possible. First, the RTP reveals that Betsoft is prepared to part with a lot of cash to keep you happy. The rate is 96.39%, and pairs with medium-low volatility. You won’t have to wait for days to hit a win, but it won’t be colossal either. The maximum win potential in Betsoft Stacked slot is 664.3x the stake. 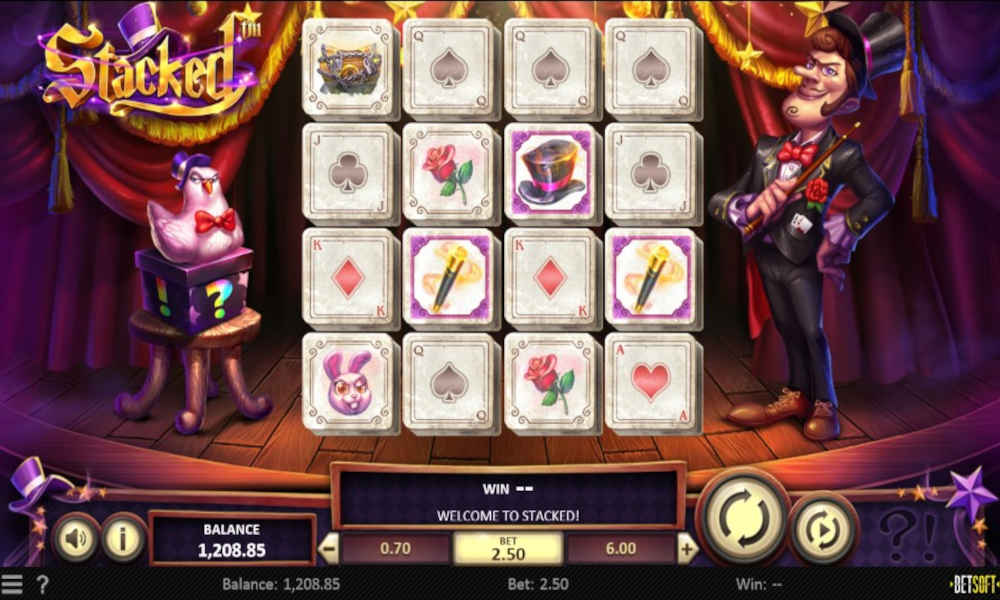 HOW TO PLAY Stacked?

If we are to judge Stacked slot by what Betsoft announced, the game is epic. It has a magic theme, and the entire game screen is filled with magical paraphernalia. The backdrop is a stage with red curtains. The grid is positioned at the centre of the stage. On the left side of the grid is a bird on a stool. The bird is standing atop a box with a question mark on it. This seemingly represents the Mystery feature which we will discuss in the next section. On the right side is the Magician. He looks like a cartoon, which fits the whole theme. His style is completed with a wand, a hat, and a rose. He points to the grid, which hopefully produces some magic tricks.

The grid is an interesting thing. It hosts 4 rows and 4 reels. All icons that appear on the grid resemble playing cards – which again reminds us of magic tricks. Among the symbols, there are card royals which belong to the low-paying set, and magician’s items like rabbits, roses, wands, hats, and mystery boxes. We also noted that the icons appear to be stacked, which is probably why we call this a Stacked slot. The Mystery box is what unlocks the Mystery Box feature. Below the grid is the UI with settings.

Medium-low variance and 96.39% RTP suggest this slot is not about high stakes and adrenaline. Instead, it’s more pro-entertainment – it’s a magic show, after all! You get to spin the reels at any pace you like, and the game promises to be mild-tempered in terms of payouts. Speaking of payouts, the maximum win potential Stacked video slot has is 664.3x the stake. Not bad, right? Well, it’s a Betsoft slot – you cannot expect a grand payout, but it is more than enough to keep you in the game.

Secret tricks, magic hats, and mysterious boxes… are we in a magic show or Betsoft Stacked slot? Both, it seems! Let’s see what else is down this rabbit’s hole of a game.

All Betsoft slots are magical, but this one is related to magic. And it is magnificent, we bet! Stacked slot arrived on February 18th to all Betsoft casinos. You can see where to play Stacked slot in our list of top recommendations below.

Magic tricks are not entertaining for kids only. Betsoft’s Stacked slot features a string of tricks and illusions, but out favourite ones are the Fix the Trick and the Secret Trick. And let’s not forget the payout as well. Play Betsoft Stacked slot for real money and learn the mystery of this magical slot release. The game might pull a hat trick as well!

Can I play Stacked for free?

Yes, you can play Stacked slot for free in many Betsoft casinos. For now, the game is not available for demo play at BestCasinos, but it arrives soon to our website as well.

Can players find Stacked for real money play in casinos?

Is Stacked available for mobile play?

Yes, players who wish to play casino games on mobile devices can also find Stacked for mobile. Like all other Betsoft titles, Stacked is available in mobile casinos which offer Betsoft titles.

What is the maximum payout for Stacked?

WHERE TO PLAY STACKED FOR REAL MONEY:

Players, we need your help with how we should to rank and rate these reviewed casino games. You can help us by rating this game, and if you really enjoyed playing Stacked. You can also share it with your friends on Facebook, Twitter and via email. For all freeplay games, if your free credits run out, simply just refresh the page and your balance will be restored.

Rock Star
Themed video slot games are always an attraction for players and those that like ...
Software:
Betsoft
Reels:
5
Paylines:
30
RTP:
94.50%
Volatility:
High
VIEW ALL GAMES