The Faces of Freya

The Faces of Freya draws inspiration from Norse mythology. More specifically, Freya, one of the main goddesses, is the protagonist. Myths about Freya have been woven into the fabric of this slot, and you will see elements both in the features and the game design. The Faces of Freya comes with three different base game features, as well as three Free Spins options. The main feature is Folkvang, Play’n GO’s long-term game objective of combining all three Free Spins versions. You’ll also get to see Spins of War, Spins of Love, and Spins of Sorcery.

The technical aspect of the slot is just as impressive as  the visual side. The multiple features woven into the slot balance out the 96.20% RTP with medium volatility. You can win up to €500,000 within Freya’s world, as the max payout is 5,000x the stake. The maximum bet is €100. This release is fully adjustable to all devices, including mobile, tablet, and desktop. For more information, keep reading our review to learn how to play and win inside the Faces of Freya online slot.

THE FACES OF FREYA SLOT GAME 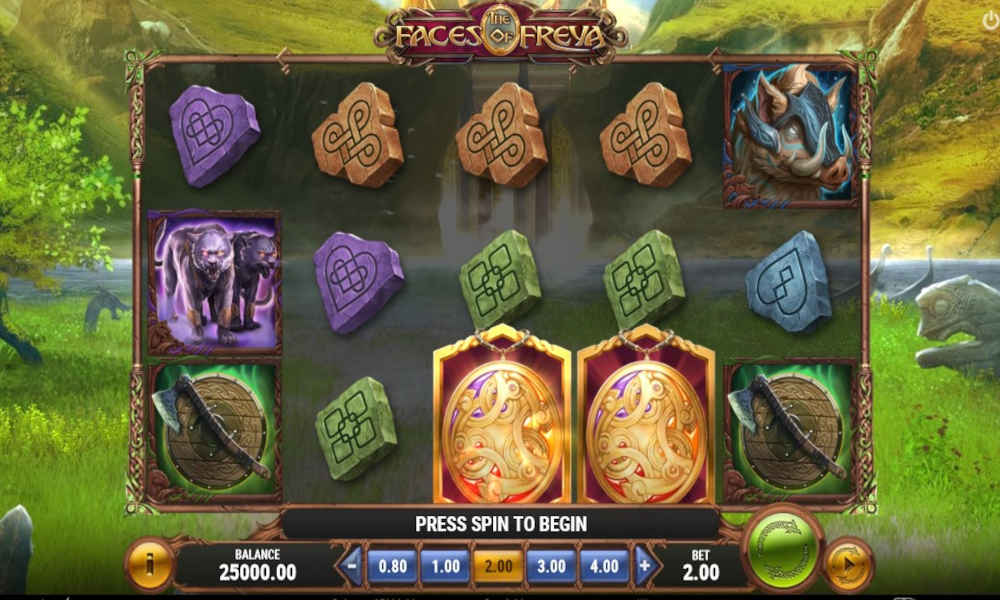 HOW TO PLAY The Faces of Freya?

Mythology is a potent choice for a game theme. Granted, Egypt and Asia have rich cultures, and both mythologies have been explored to a great extent. However, Norse mythology, regardless of the number of games inspired by this topic, is always in vogue. Yggdrasil, Play’n GO, and NetEnt are just some of the companies immersed in the production of Norse-inspired casino games. The Faces of Freya slot, it seems, is there to complete Play’n GO’s growing library of mythological releases at the start of 2021.

The Faces of Freya slot follows the story of Freya, one of the most powerful Norse goddesses. If you aren’t that invested in the Norse folklore, get ready for a quick lesson. Freya, or Freyja, was the goddess of love, fertility, death, and battle. Quite the collection! She is the sister of Freyr and daughter of the god of sea Njörd. According to the legends, she rode a boar and held pigs as her sacred animals. But here is the most interesting part – she has the Brísingamen, a powerful necklace around her neck. Play’n GO included this amulet in the game as the Scatter. The rest of the symbols include Freya herself,  bracelet, some wild animals, a shield, and four regular icons.

Now, let’s talk about technicalities. Play’n GO The Faces of Freya slot has medium volatility, 96.20% RTP, and 20 paylines. Quite the powerful setup, right? It’s a great starting point for the game’s payout potential. The maximum win you can score by playing with Freya is 5,000x the stake. To get to the highest cash out, you’ll need to use the max bet setting, which is €100. In the next section, we’ll have a closer look at the special features.

Oh, this should be interesting! Play’n GO inserted a plethora of inventive features to keep things jazzy. They all refer to free spins, but there are four different variations of these.

The Faces of Freya online slot is a potent release for Play’n GO. Using an interesting theme – Norsemen are not new, but Freya as the protagonist is – the game enchants players with its simplicity.

We loved the fact that Play’n GO introduced 4 features which are all related to each other. There’s no better way to enjoy a game than playing for free.

Frequently Asked Questions about The Faces of Freya Slot Release

Can I play The Faces of Freya on mobile devices?

Yes, you can play The Faces of Freya slot on any device you want, including mobile phones. All Play’n GO slots have full support for various platforms, and Android, iOS, and Windows are included. Just visit any mobile casino of your choice which offers casino games by Play’n GO, and you will find the game in the lobby.

Is the Faces of Freya slot available for free?

What is the best casino for playing The Faces of Freya online slot by Play’n GO?

Play’n GO is a global brand which works with dozens of online casinos across the industry. However, our favourite Play’n GO casinos is Mr Green because it has an amazing bonus system and often holds promotions which include Play’n GO slots.

What are the betting limits in The Faces of Freya online game?

WHERE TO PLAY THE FACES OF FREYA FOR REAL MONEY:

Players, we need your help with how we should to rank and rate these reviewed casino games. You can help us by rating this game, and if you really enjoyed playing The Faces of Freya. You can also share it with your friends on Facebook, Twitter and via email. For all freeplay games, if your free credits run out, simply just refresh the page and your balance will be restored.

See all of our Online Slots game reviews where you can play 655 online slots games for real money in any of our recommended casino sites.

PLAY THE FACES OF FREYA AT THESE TOP RECOMMENDED CASINOS