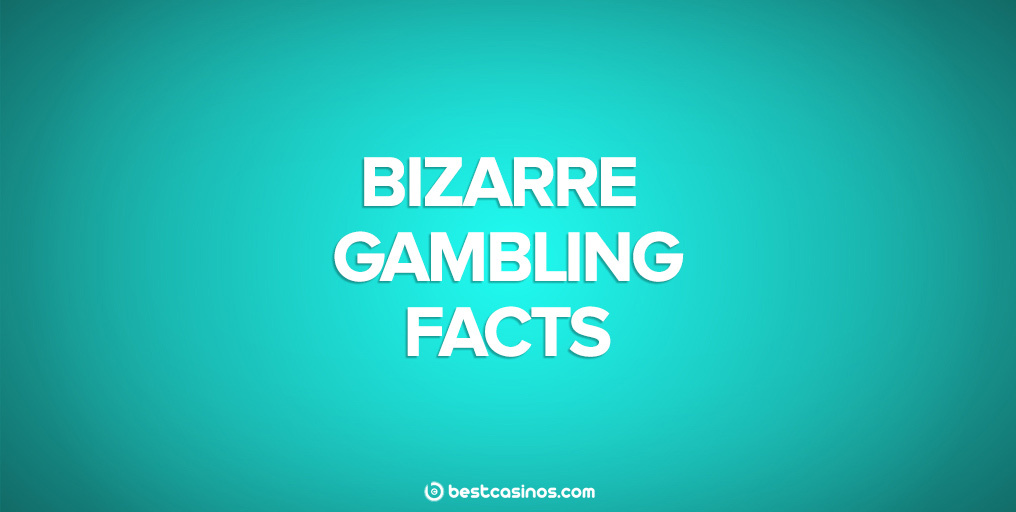 Casino gambling has always been represented as mysterious and elusive. It is built on opulence and luxury, yes, but the aura of mystery keeps things interesting for millions of players. And that is why bizarre gambling facts are appealing to all players – even people not involved in gambling!

We compiled a list of top peculiar facts about gambling you probably don’t know. Do you think slots were invented in casinos and were used for gambling from the start? We don’t want to burst your bubble, but the answer is right below!

1.  Craps Players in the US Used to Swallow Dice to Avoid Police Raids During the 1920s

The first one of our top bizarre gambling facts is bizarre indeed. During the 1920s, gambling was strictly prohibited on the territory of the USA. But people being people, they could not resist playing their favourite games. Hence, they would gather somewhere underground to avoid the police. Most of the time, they were lucky, but then there were instances when the police raided their gathering places.

In such situations, players would swallow the dice to avoid arrest. Moreover, they would avoid conviction, as, without proof of gambling, there could be no conviction.

No dice – no conviction.

Also, the expression ‘no dice’ allegedly has to do with this peculiar practice. Namely, a newspaper in Texas published an article which contained the first known record of the expression. The article spoke about the trials of gamblers who have swallowed the dice and thus avoided conviction.

2.  A Car Mechanic Invented the Slot Machine to Entertain His Customers

Today, slots stand as the most popular and successful casino games in the history of gambling. More importantly, online slots attract millions of people to casino sites every single day. But what are the origins of the game? How did it become so popular?

The story of slot games begins in 1887, when Charles Fey, a San Francisco car mechanic, invented a diversion for his customers. Car repairs took time to complete, and Fey wanted something to amuse his customers as they waited. He devised a concept for coin-operated machines, but actual slots appeared a decade later. His famous invention is the Liberty Bell, the first machine that employed bells and horseshoes as symbols on the reels.

3.  The Debate about the Origin of Blackjack Is Still Going Between the Italian and French

Some sources say that blackjack was invented in French casinos in the early 1700s. Back then, the game was called Vingt-et-Un, or Twenty-One. On the other hand, claims that blackjack derived from the Italian Thirty-One (Trentuno) are also quite strong. For instance, the Italian version became popular in the 13th century, centuries before the French popularized Vingt-et-Un.

4.  The Chinese Invented Gambling, but the French Created Cards

Gambling originates from Asia, but Europe revolutionized gambling and made it into the phenomenon it is today. We’ll discuss the origins of gambling and first games below, but let’s focus on the primary medium for playing games of luck. The playing cards origin represent our favourite among bizarre gambling facts.

Gambling was invented in China 2,000 years ago.

Namely, playing cards are the main instruments for most table games. But did you know that the four suits originate from France? Each suit represents a class in French society. Spades represented aristocracy, while hearts were the symbol of the clergy. Diamonds represent the merchants, as trade was a massive part of the French economy and a respected vocation. Finally, we have clubs which stand for the peasants.

Gambling and casinos are today almost synonymous, but that wasn’t always the case. One explanation for that lies in the origins of gambling. When games of luck were first introduced, casinos did not exist. Moreover, casinos are just places where gambling takes place. Numerous luck games never reach the casino.

The first game of luck that we consider gambling is keno, and it was invented in China over 2,000 years ago. Between 205 and 187 B.C, the Han Dynasty ruled over Chinese provinces. However, the ruling dynasty was often at war with neighbours. One particular war greatly affected the people, and the rulers desperately needed money for food and weapons. Hence, a man named Cheung Leung devised a game which helped them win a lot of money. Interestingly enough, the concept hasn’t changed much since then.

On the other hand, roulette is considered the oldest casino game, meaning it is the first game to be introduced in casinos. Keep reading if you want to learn about the invention of roulette.

Blaise Pascal was a French inventor, mathematician, and physicist. He is famous for a number of inventions, including a rudimentary version of a digital calculator and the roulette wheel.

Instead of perpetuum mobile, we have roulette.

But how did a famous physicist come to create a wheel for gambling games? To be honest, he wasn’t planning on creating a roulette wheel. Instead, he was searching for a way to make a perpetual motion machine. The roulette wheel, or its primitive form, was simply a by-product of his tests and experiments.

7.  The World’s Smallest Casino Is a Taxi in Birmingham

We know that the largest casino in the world is WinStar World Casino in Oklahoma. Gambling operators seem to be competing for the spot on the list of the biggest casinos in the world. But what about the smallest ones?

Well, the current smallest casino establishment in the world is located within an automobile. Moreover, it is not a regular car – it’s a cab in Birmingham. The gaming place belongs to the Grosvenor Casino brand. The four-wheeled joint offers a dealer, a table, and a TV to watch online casino games. The cab can take you anywhere as a regular casino, but a trip to the real gaming venue is free. However, the concept lasted briefly, as the brand quickly shut down the service.

If you ask anyone in the digital gambling industry about fruit machines, they will know you mean online slots. However, fruit machines a century ago meant something entirely different. To be precise, they meant exactly what their name said – machines that yielded fruit.

Well, not real fruit, but rather fruit-flavoured chewing gum. Games of luck were banned for a long time, so players had to develop creative ways to gamble. They could not use real money, so instead, they opted for fruity gums. The symbols represented the real reward. So, if you won three cherries, that meant your winning would be paid out in cherry-flavoured gums. Interesting, right? To this day, we use fruits as symbols for classic slots.

9.  The Sandwich Was Invented in a Casino

Are you feeling hungry? All this reading must have worn you out, so why don’t you have a sandwich?

Sandwiches are a favourite meal for many of us, but few people know that sandwiches originate from casinos. This probably sounds incredible to you. Who could have thought that delicious sandwiches packed with vegetables and meat come from casinos, not fast-food restaurants?

Well, we have John Montagu, the Earl of Sandwich, to thank for this. He was a member of the English aristocracy and was an avid fan of playing cards. While playing cards with friends in a gaming club, he felt hunger but was reluctant to leave the table. He ordered his servant to bring him two slices of bread with meat placed between to snack while he played. His invention was later named after him, as many grand inventions often are.

10. The First Las Vegas Casino License Went into the Hands of a Woman

Women are often underappreciated in the world of gambling, especially if they are working in the industry. In the previous century, the situation was even worse for women, as they weren’t considered a valuable part of the gambling society. But one woman changed that, or at least, catalysed change.

In the 1920s, gambling was legal in Las Vegas, but gaming joints did not possess valid working permits. Mayme Stocker, a respectable housewife from Las Vegas, decided to open a gaming establishment under her name. Her venue was named Northern Club. She then applied for a license and received it – the first person to receive a legal licence in the state. So, she wasn’t only the first woman to receive a license, but rather the first person to reach such an important milestone.

We hope you liked our bizarre gambling facts! As you know, gaming has been in existence for thousands of years, so unusual facts about gambling are an integral part of its appeal. If you have something interesting to share with us or just want to share your thoughts, don’t hesitate to reach out. We love bizarre gambling facts, so share yours with us! Drop a comment in the comments section below – we look forward to hearing from you.