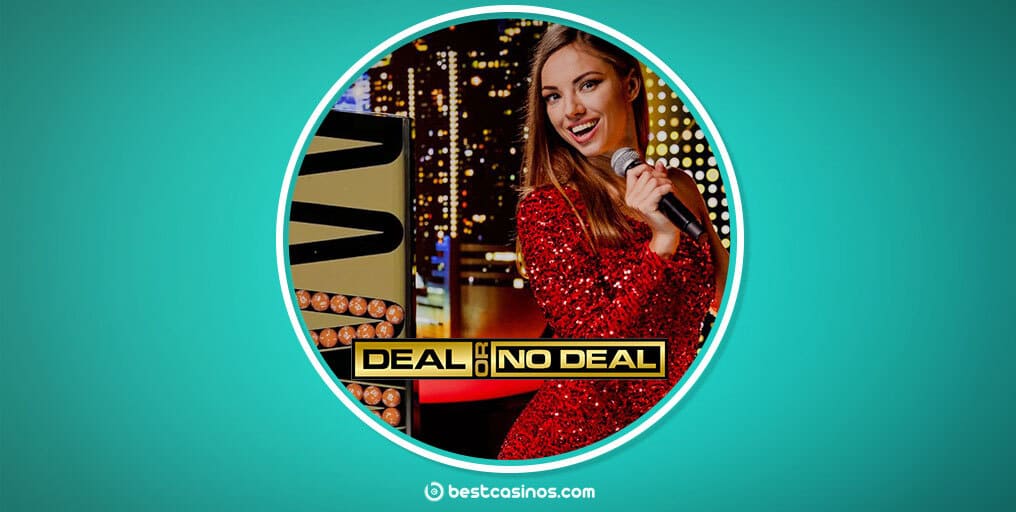 Playtech recently announced the release of its exclusive Deal or No Deal Big Draw live game show, positively surprising its players and fans of the famous TV show. The game developer teamed up with Endemol Shine to bring this game to live screens in top online casinos.

To honour the new release, we decided to explore it a bit and create a guide for interested players. Join BestCasinos as we investigate the latest live game show from Playtech. We included a detailed walkthrough for the rounds, side bets, and technical info which you might need. 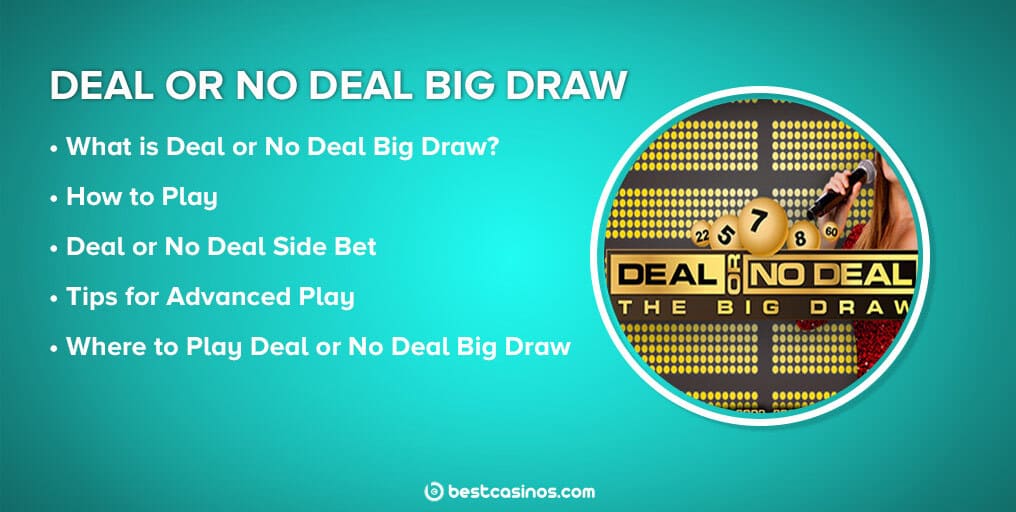 What is Deal or no Deal Big Draw?

Deal or no Deal Big Draw is a live game show that Playtech created and launched as part of Playtech Live. It is based on the eponymous TV show owned by the internationally acclaimed Banijay Brands.

The casino software provider took the US version of the show as the model for the new release. However, few alterations were made to give it a bigger live casino spin. Deal or No Deal Big Draw game rounds consist of several phases that we’ll introduce shortly.

One of the defining characteristics is the mixture of bingo and Deal or no Deal TV show. Deal or No deal Big Draw uses 16 briefcases in each round, and one of them is set aside as the Player’s briefcase. The rest each have designated numbers and are opened when a corresponding number is drawn from the hopper.

The objective of the game – just like the original show – is to grab a cash prize. You have two ways to achieve this: either by taking the deal that the banker is offering you near the end of the round or by revealing the hidden prize in your assigned briefcase.

Your odds of winning in this game are significantly lower than in other live game shows. In theory, you can expect a 95.28% RTP for the game, while with the side bet the odds increase to 95.38%.

How to Play Deal or No Deal Big Draw

For those of you who have watched or participated in the TV show of the same name, the concept of the game will be quite familiar. However, if you are not well-versed in the language of Deal or No Deal, our guide will be great. We’ll teach you how to play Deal or No Deal Big Draw in no time!

The Deal or No Deal Big Draw game has five phases:

Remember these phases well, because each requires concentration from the players. You don’t have much time for dillydallying as you have to be quick with making decisions about your moves.

The first thing you will need to do once you enter the live show is buying tickets. The tickets are your main tool for participating in the rounds. This is a bingo game, after all.

Ticket cost €1, €5, €10, €25, and €100. According to your budget, select a ticket that you wish to purchase and click on the Buy button. On both sides of the screen, you will see a display of various prizes. They are different for every ticket because the value of each prize set is related to the ticket. So, if you purchase a €1 ticket, the maximum prize value is €20. On the other hand, if you buy the €100 ticket, the maximum amount you can win is €2,000.

Once you buy the ticket, the game will offer you a choice of boosting the available prizes. You can choose to boost one, two, or even all prizes that go with your selected ticket.

To do so, you will have to pay a small fee and pick one of five offered golden briefcases. Hidden in the chosen briefcase is the boost amount that will automatically add to the chosen prize.

Players can boost prizes as many times as they want – provided they remain within the time limits reserved for this phase.

The ball draw is actually where this game got the name Big Draw. As we said, there are 16 briefcases with numbers on them. The one with the question mark is yours, and it contains your prize. To get to her, you have to receive a deal from the dealer – and that’s where the ball draw comes into play.

There are 60 numbered balls in the bingo machine, and the initial draw involves drawing of 20 balls. If the number matches a number on one of the 15 suitcases, the suitcase opens. The prize inside is automatically lost for you, leaving you with one potential reward less.

The entire point of this phase is to hit at least seven briefcases. If you succeed, the Banker will give you an offer. If it doesn’t happen, you will have a chance to buy additional balls.

This phase is only there if you haven’t succeeded in opening seven briefcases. Buying extra balls will give you another shot at reaching the banker’s offer.

You can do this purchase three times in total. In other words, the machine can draw up to 35 balls per round. Bear in mind that each purchase of additional balls costs. The price depends on the remaining prizes in the briefcases and how many hits you need to reach the offer.

Phase 5: Deal or No Deal

The final part of the round is the Deal or no Deal segment where the banker issues an offer to you. You can choose to take it or continue with additional balls. Some players choose to buy additional balls because there are multipliers after you reach the seventh ball. You can multiply prizes up to 25x.

Deal or No Deal banker will give you a cash offer. Should you take it, that becomes your prize. If not, your briefcase will open, and the prize within will be what you get.

And that is it – taking or refusing the deal marks the end of the round after which players prepare for the next one.

Deal or No Deal Big Draw Side Bet

Playtech also added a side bet into the game. It is almost like a bonus game which you can play alongside the main game.

The side bet is a Mini Draw standard bingo game. You get tickets with 3×3 lines which you need to complete to get a payout.

Your top prize for this side bet is paid after you complete 6 lines.

To purchase one, open the Mini Draw panel and select the number of tickets you wish to buy. The minimum price of each ticket is the price of tickets for the main game, although you can pay more for bigger cards.

Of course, you can acquire multiple tickets – 4, 8, 12, or 20. The line completion is done using the 20 initial drawn balls from the main game.

Here are the payouts for the Mini Draw side bet:

Deal or No Deal Big Draw is a combination of real-time bingo, RNG games, and TV show elements. This colourful combo makes it hard for the players to experiment with strategies. Nevertheless, you can still use some precautionary steps to ensure a better gaming experience.

Here are our tips for playing Deal or No Deal Big Draw live.

Where to Play Deal or No Deal Big Draw

At the moment of writing this article, Deal or no Deal Big Draw was available exclusively on Bet365. The casino is currently the only place that offers this live casino game show to its players.

We hope that after this exclusive release period expires, Playtech will launch the game across other casino brands. We guess that it will reach all major Playtech online casinos like William Hill and BitStarz in no time.

The rules of the Deal or No Deal Big Draw game might be a bit complex, but it gets easier after a couple of rounds. There are so many things to look at and to consider, so don’t worry about the confusion – it happens to everyone.

Our team enjoyed the game a lot, and we don’t doubt many players will love it once they try it. If you have anything to add or share, feel free to drop us a comment in the section below.

Stay tuned for more updates about Playtech live games like Deal or No Deal Big Draw!