Evolution wanted the Golden Wealth variant to be as close to Lightning Baccarat as possible without moving into the Lightning territory. As a result, the Golden Wealth table is a magical table full of multipliers and gold dust. The game features Golden Cards – five randomly chosen cards that bring multipliers to each round. The Multipliers can stack up to 8x per Golden Card, so you can augment the win with a simple stroke of luck – and gold.

Evolution’s golden new Baccarat is a dashing table set in a custom studio environment. Because its style matches Asian opulence, you’ll see lots of red and gold. Furthermore,  augmented reality elevates the experience even further for tech-savvy players. We are delighted to say that Golden Wealth Baccarat is also available in RNG mode, thanks to a First Person version released alongside the live table. You can play the game for only €1 per round, while maximum bets go as high as €15000.  The game has low variance, 98.85% RTP, and an impressive max win. The maximum potential payout is 1,310,720:1. 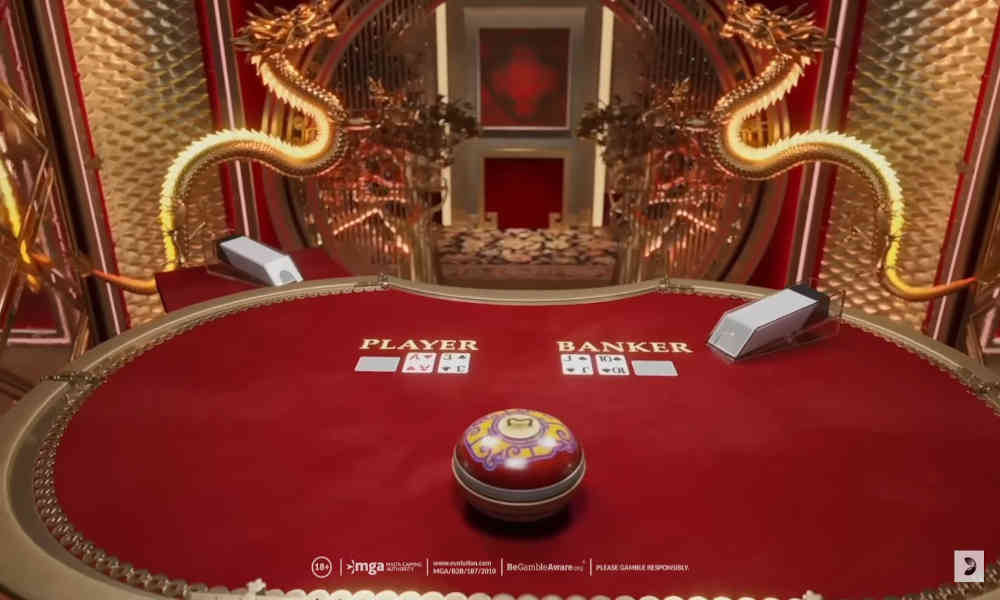 HOW TO PLAY Golden Wealth Baccarat?

Golden Wealth Baccarat is an Asian-themed live baccarat game that we are dying to show you. Evolution announced the game mid-2021, triggering an avalanche of support and delight from the players across the globe. Among the announced releases, the roadmap boasted 6 impressive games. However, Golden Wealth Baccarat stole the show with its red and gold décor and impressive payouts.

From a technical point, the game resembles Lightning Baccarat a great deal. The key aspect of the game is the Golden Card multiplier ability, hence the resemblance with the Lightning variant. However, this table took multipliers and payout potential to the next level. Just imagine, you can win up to  1,310,720:1 with a Tie bet! Moreover, according to Evolution, this live baccarat table is a bit smoother and calmer. Lightning games are intense, with electrifying multipliers and fast-paced gameplay, but Golden Wealth Baccarat smoothens the atmosphere – while upping multipliers.

The studio which houses the table is drenched in red, with golden details decorating nearly every surface that the cameras can cover. Golden dragons, a clear nod to Asian culture, are also included in the décor, cementing this game as a vibrant Asian baccarat table where the magic happens. The style is on-point, the atmosphere is buzzing, and the multipliers are flowing. A marvel to look, play, and enjoy.

To play Golden Wealth Baccarat, you will need to prepare a steady balance and patience. It’s not very volatile, but we don’t doubt you will thoroughly enjoy your time in the game as you stand to catch a shower of multipliers that blaze through the game.

Two card piles are at the centre of the table, and your task is to guess which one will be closer to a total of 9. All cards in the deck have their face value, except face cards – they are equal to 0. The dealer will draw two cards on both piles during the initial draw. Should a pile exceed the total of 9, the first digit in the two-digit number will be erased, with the second number transforming into the hand total. For hands that are under 5, the dealer will draw a third card. However, that hand automatically wins if the dealer draws an 8 or 9 to either of the two hands.

Because Evolution likened the game to Lightning Baccarat, we used the popular table as a reference point for this release. Although both tables have multipliers, Golden Wealth is milder in temperament, which brings you to frequent wins. Bets go from €1 to €15,000, which is more than usual.

In terms of features, baccarat is a game of few boosters. Hence, the Golden Wealth variant does not go crazy with in-game features, but rather wraps them up beautifully in golden and red hues. Here’s everything you get to see in Evolution Golden Wealth Baccarat.

The sky is the limit for Evolution live casino games. So, who knows what we are going to get with Golden Wealth Baccarat! Low variance, a 98.85% RTP, and massive multipliers like in Lightning Baccarat make Golden Wealth a golden baccarat opportunity for you.

So, in conclusion, we get to play a superb combination of classic baccarat and boundary-pushing multipliers which surely shake the frame and delight Evolution fans worldwide.

WHERE TO PLAY GOLDEN WEALTH BACCARAT FOR REAL MONEY:

Players, we need your help with how we should to rank and rate these reviewed casino games. You can help us by rating this game, and if you really enjoyed playing Golden Wealth Baccarat. You can also share it with your friends on Facebook, Twitter and via email. For all freeplay games, if your free credits run out, simply just refresh the page and your balance will be restored.

See all of our Baccarat game reviews where you can play 21 baccarat games for real money in any of our recommended casino sites.

Mercy of the Gods
No matter which theme NetEnt picks for its game, you know the title will be a smashing ...
Software:
NetEnt
Reels:
5
Paylines:
20
RTP:
96.64%
Volatility:
High