Not only has Betsoft brought innovation through its latest video slot Max Quest: Wrath of Ra but it’s also introduced a revolution into the game making process which will hardly ever be the same again. Avatar customization, XP-driven player progression, achievement and extensive social features as trademark facets of computer games all made a bow on the online casino stage thanks to this state-of-the-art product.

Max Quest: Wrath of Ra matches players in console-style lobbies and allows you to purchase different guns required to hunt down the God Event bosses and Reborn Mummies randomly rising from the dust in order to collect coins.

Bestsoft is giving a whole new meaning to an Egyptian-themed slot game with Max Quest: Wrath of Ra slot, which boasts an RTP worth 96% and comes with a jackpot of 5,000 coins. 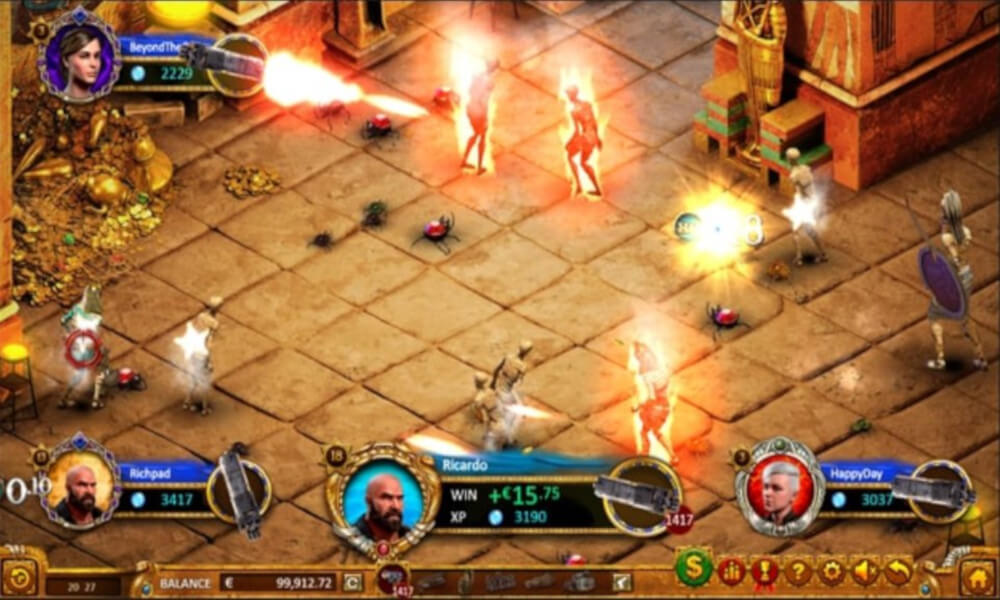 HOW TO PLAY Max Quest: Wrath of Ra?

As you launch Max Quest: Wrath of Ra, try not to get lost in the immersive 3D settings which mimic those of the traditional video games. The game starts with you picking an avatar, which is not what you’d usually do in a slot game.

There are 5 heroes to pick from. You will next choose from 10 backgrounds and 10 borders to fully customise the screenplay before the action starts. Max Quest matches players with five more which means there will be six of them in total in a room. There are no standards bets to be set with coins per spin but the players will instead buy bullets for weapons they get to use during the battles. Bullers cost anywhere from €0,01 to €0.25.

As you enter a pharaoh’s tomb which has lain undisturbed for millennia, the band of explorers you’re a member of will learn the seal has been broken and that Ra’s curse has been awoken. The iconic pharaoh’s army will rise to prevent you from reaching unimaginable treasures of the ancient Egyptian world. You will have Scarab Hatchlings to destroy, along with Shadow Scarabs, Golden Tomb Scrabblers, Ruby Crypt Watchers, Wrapped Shadowguards, Wrapped Minions, Wrapped Spiritguards, Crimson Bataantas, Emerald Bataantas and Tahaway Warriors. Mighty Gods – Anubis, Osiris and Ra – will stand in your way as well. A wide array of guns and a truly diverse arsenal of firepower will be at your disposal during battle, which come in crates and can also be purchased during the play for €1, €2 and €4.

As you go along making progress, a leaderboard will keep you informed at all times of the battle stages and achievements. Paytable is available for detailed information of the gameplay but the bottom line is that you go on to kill the enemy to collect varied prizes off of different creatures.

Uniquely designed and packed with a gameplay which is a far cry from anything you’ve ever seen in a slot game before, Max Quest: Wrath of Ra is closer to a video game. The specifics of this proper gem are not classified through classic features and playing modes but are rather revealed through progress.

God Events – At the end of every round, players can expect a random reward. A God Event will see all current enemies on screen disappear and a random God summoned to the battle front along with his entourage. The battle will then commence and as hard as it gets to defeat a God, it will be well worthwhile knowing the players will be given a huge treasure chest filled with collectible artefacts and further cash prizes.

Free Fire – easily compared to Free Spins, the Free Fire feature occurs once all enemies drop their weapons and basically become sitting ducks on the screen. The best thing about this feature is that Free Fire kills don’t cost any money which means that your spent ammo comes free of charge.

Unique, delightful and demanding. These three words perfectly sum it up when it comes to Betsoft’s Max Quest: Wrath of Ra video slot. Rich in detail – both visually and technically – this brand-new title is revolutionising the online slot world and ushering a new era of casino gaming.

Wrath of Ra comes with a playing screen that does not deploy classic reel set and paylines but rather includes playing rooms, player upgrades, achievements and battles off of which you get to earn coins and progress up the leaderboard.

Killing enemies, collecting XP and completing quests will reward you with treasure chest containing valuable prizes and rewards that go up to 5,000 coins. This gamified slot is definitely a breath of fresh air and a landmark product for Betsoft.

WHERE TO PLAY MAX QUEST: WRATH OF RA FOR REAL MONEY:

Players, we need your help with how we should to rank and rate these reviewed casino games. You can help us by rating this game, and if you really enjoyed playing Max Quest: Wrath of Ra. You can also share it with your friends on Facebook, Twitter and via email. For all freeplay games, if your free credits run out, simply just refresh the page and your balance will be restored.

Faerie Spells
There is a touch of magic on 5 reels of action in this 10 payline shared jackpot ...
Software:
Betsoft
Reels:
5
Paylines:
109
RTP:
96.03%
Volatility:
Medium

Ogre Empire
Ogre Empire is one of the latest - and most exciting - slot games coming from the ...
Software:
Betsoft
Reels:
5
Paylines:
25
RTP:
95.23%
Volatility:
Medium

Charms and Clovers
Irish themed slot games are quite popular at online casinos, but when it comes to ...
Software:
Betsoft
Reels:
6
Paylines:
40
RTP:
96.3%
Volatility:
Medium

Sugar Pop 2: Double Dipped
Betsoft has created some great games over the years and Sugar Pop was one of the ...
Software:
Betsoft
Reels:
7
Paylines:
Cluster Pays
RTP:
96.42%
Volatility:
Medium