NFT Megaways™ slot by Red Tiger is a 6×7 online slot with 10,000x payouts and 200,704 ways to win. It’s the first slot of this kind in the industry because it uses, besides a tech-savvy crypto theme, four NFTs purchased by Evolution. As the first-ever slot to bring NFTs into online gambling, it’s undoubtedly a game you do not want to miss. So join Red Tiger casinos and play NFT Megaways for a chance to win up to 10,000x the stake.

The biggest stars of the show are certainly CryptoPunks, the four purchased non-fungible tokens. They appear in the game as Wilds, which combine Wild replacements with win multipliers. Fill the Crypto Punks Bar, and you are looking at a prize of up to 30x thanks to impressive multipliers. You also get to enjoy Crypto Spins, which pack 10+ Spins full of multipliers that reset only at the end of the round.

The technical side of the story entails a pixelated world of crypto elements. Red Tiger NFT Megaways™ slot is highly volatile and boasts a 95.66% RTP. Red Tiger and Big Time Gaming are now both part of the Evolution brand, so Red Tiger got Megaways mechanics from BTG and the NFTs from Evolution. The number of winning ways, thanks to Megaways, skyrocketed to nearly 200,704. You will have to use €0.10 minimum bets to play the game, while maximum bets are variable. Read the rest of our NFT Megaways™ slot review and discover features and how to play. 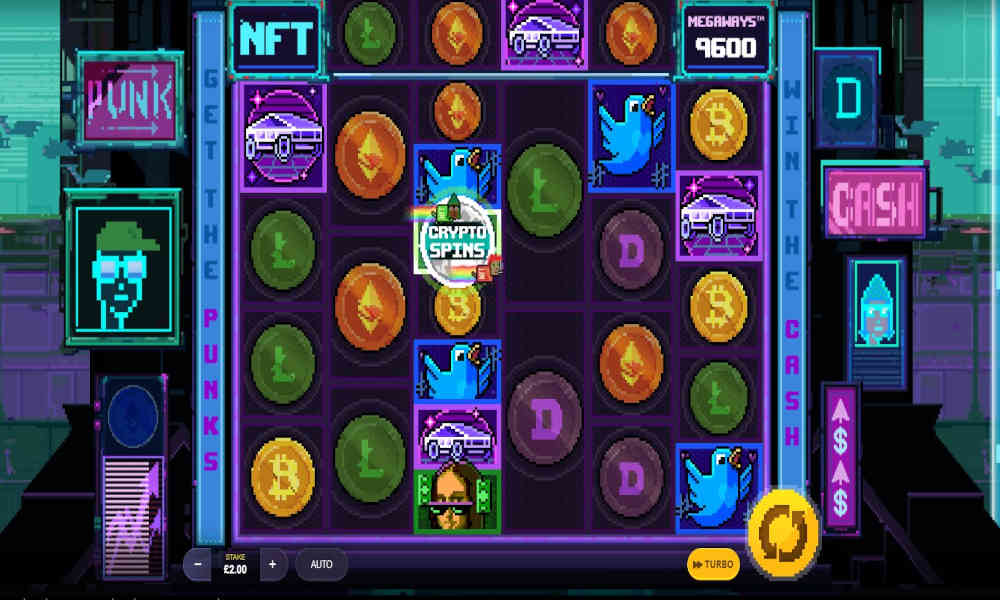 HOW TO PLAY NFT Megaways™?

NFT Megaways™ slot is a slot featuring NFTs or non-fungible tokens. These tokens are essentially proof of the authenticity of a digital asset (such as photos, audio, and video). Now, a photo can appear online millions of times, but only one is the original – and the proof is located in the token stored on the blockchain. One of the main things people know about NFTs is that they can get very, very expensive. And guess what? NFT Megaways slot features four CryptoPunks NFTs, one of the earliest examples of non-fungible token mania slowly starting to take over the world. Earlier this year, Evolution – the owner of NetEnt and thus Red Tiger – acquired four CryptoPunks NFTs. Punks 3008, 4701, 8143, and 914 appear in the game, along with a host of interesting meme-inspired game symbols. The symbols are very familiar from pop culture, such as the Thug Life Mona Lisa, Twitter’s Larry the Bird, Musk’s Tesla Cybertruck, the good doggo Shiba Inu, and diamond hands. These are the high-paying icons, while four cryptocurrencies represent the low-pay set. Bitcoin, Litecoin, Dogecoin, and Ethereum are listed as low-pay tiles.

Wins are valid only if the symbols fall on adjacent reels. It’s a Megaways slot, so you don’t need a specific combo across the grid, but rather adjoining reel wins. Thanks to Big Time Gaming’s patented slot mechanics, Red Tiger NFT Megaways boasts up to 200,704 ways to win.

In terms of looks, we need an entire review of just the visuals. Seriously, Red Tiger’s team did an incredible job with this slot! It’s a crypto theme, so expect to find many enlarged pixels and ‘90s computer symbols on the grid. It has an arcade feel, similar to NetEnt’s Street Fighter II: The World Warrior. However, Red Tiger pushed it on a new level with the soundtrack, overall design, and game features. And have we mentioned NFT Megaways online slot uses real NFTs? Yep, you won’t find any other slot that does that (for now).

The game has high volatility, 95.66% RTP, and 10,000x potential payouts. To play the game, you can wager between €0.10 and €10 per spin. In addition, you can play NFT Megaways slot for real money both on desktop and mobile devices.

The biggest feature of the game are the CryptoPunks NFTs; there’s no debate. They help you win more, but you can also use other game features to increase your winning chances. Here are all the features of the Red Tiger NFT Megaways slot.

Get into the groove with the Red Tiger NFT Megaways slot! Play the first-ever NFT slot game online and win a massive payout worth 10,000x. You can also get to see the four Evolution-owned NFTs that the company purchased earlier this year.

For now, NFTs are not that big of a trend in the gambling industry, but we have no doubts they will soon become a hot topic. Evolution’s purchase started a revolution in crypto gambling, and we don’t doubt we’ll get to see more NFT slots in the future.

Until you get new NFT online slots, play NFT Megaways for real money and witness the making of history at Red Tiger casinos online.

WHERE TO PLAY NFT MEGAWAYS™ FOR REAL MONEY:

Players, we need your help with how we should to rank and rate these reviewed casino games. You can help us by rating this game, and if you really enjoyed playing NFT Megaways™. You can also share it with your friends on Facebook, Twitter and via email. For all freeplay games, if your free credits run out, simply just refresh the page and your balance will be restored.