Street Fighter is back! NetEnt brought back the legendary warrior in the latest video slot. If you miss the old arcade hero, you can join him on an adventure in Street Fighter II: The World Warrior by NetEnt. The game provider decided to take you back to the 1990s era of arcade games. NetEnt collaborated with Capcom, the company behind Street Fighter, hence the game boasts many original features.

The authentic aura envelops both the overall design and the features inside. When it comes to the gameplay, NetEnt made it potent – all 8 original characters appear here. Moreover, they all bring power along, as they all boast different feature modifiers. Furthermore, you can enjoy the Beat the Boss Free Spins as the main feature. There is also the Car Smash Bonus Game to look forward to, should you encounter a losing streak.

Overall, this is one of the best video slots that we have seen in the past few months. In a way, it gives us a fresh perspective on modern slot gaming. Although its design speaks retro and arcade, we only see modern, innovative, and creative. The foundation is based around 5×5 reels and cluster pays. The payout potential might not seem that high to you – 7,142x – but it’s a game that flows between medium and high volatility. Finally, with a 96.06% RTP, it’s certainly a game that you – if you haven’t already – must try out. The betting range is between €0.20 and €700. 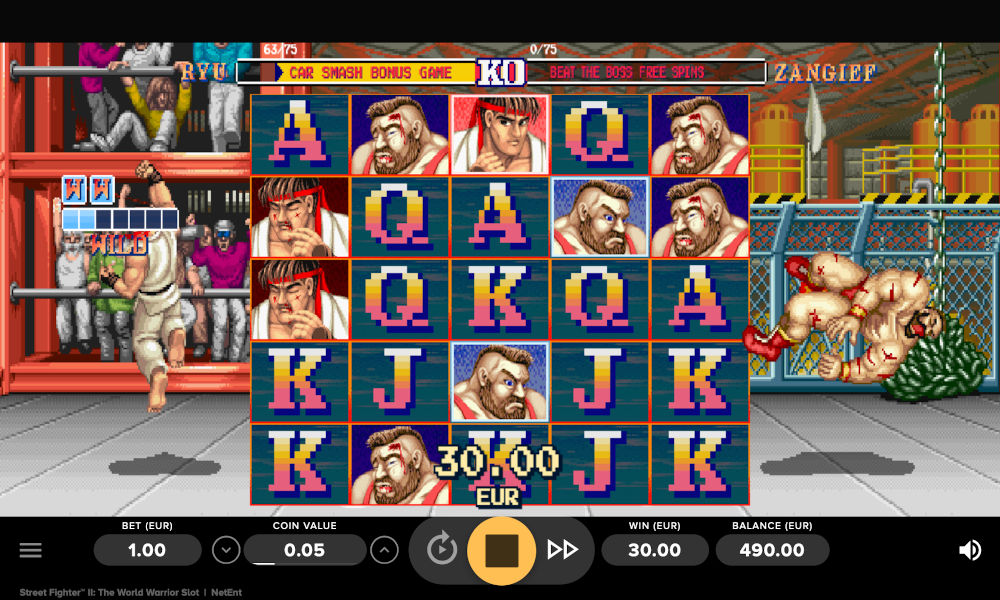 HOW TO PLAY Street Fighter II: The World Warrior?

Nowadays, it’s hard to invent something new. What most providers do is recycle, update, and rearrange. However, when it comes to NetEnt, that might not be the case. The award-winning game provider has made some exciting slots in its career. And we have no doubts that Street Fighter II will soon enter the list of top NetEnt video slots. Frankly, it would be a shame if it didn’t. Now, let’s see why.

Let’s start from the visuals. If you load the game and encounter an odd-looking design that resembles the arcade games that you played in the ‘90s, don’t fret. The game looks exactly like the original Capcom release from 1991. NetEnt and Capcom signed an agreement through which NetEnt gained an arcade license to release this as a slot. As we already said, the 8 characters from the original game appear as high symbols. However, there are lower symbols that are card royals with an arcade theme.

Now, it’s the insides of the game that are the most interesting. Namely, the game functions as a cluster pay slot, meaning that you need to form clusters to win. The grid is 5×5, so gathering 4 matching icons out of 25 symbols should be easy. Plus, there is the Avalanche feature that enables more icons to fall onto the grid once winning icons disappear. Street Fighter II comes with a medium-high volatility level and a dashing 96.06% RTP. Players have a wide berth when it comes to betting as well. The minimum bet amount is only €0.20, while the maximum goes all the way up to €700.

Street Fighter II: The World Warrior features a plethora of unique features that you will love. Each high character has a distinct modifier, and the outcome of their rounds determine the following features. Here is how it works:

NetEnt first presented Street Fighter II at ICE 2020. Needless to say, we were thrilled! Once Street Fighter II arrived at our favourite casinos, we couldn’t help but test it out several times. And we conclude that the game is spectacular.

No one expected the game to be so good. Of course, we knew that NetEnt knew what it was doing, but man, this is excellent. Street Fighter II comes with 96.06% RTP and medium-high volatility, 5×5 grid, and cluster pays.

The features are hands down, the best part of the game. Next to 8 fighters, you get to enjoy additional modifiers, Car Smash Bonus Round, and Free Spins with boss battles. It is quality entertainment wrapped in a well-known arcade game that inspires nostalgia. What more to ask for?

WHERE TO PLAY STREET FIGHTER II: THE WORLD WARRIOR FOR REAL MONEY:

Players, we need your help with how we should to rank and rate these reviewed casino games. You can help us by rating this game, and if you really enjoyed playing Street Fighter II: The World Warrior. You can also share it with your friends on Facebook, Twitter and via email. For all freeplay games, if your free credits run out, simply just refresh the page and your balance will be restored.

Emoji Planet
Emoji Planet is one of the newest games to be released from Net Entertainment and ...
Software:
NetEnt
Reels:
5
Paylines:
20
RTP:
96%
Volatility:
Medium

Wild Rockets
Wild Rockets is one of the newer additions to the Net Entertainment portfolio and ...
Software:
NetEnt
Reels:
5
Paylines:
720 ways to win
RTP:
96.70%
Volatility:
High

Universal Monsters: The Phantom’s Curse
Net Entertainment has designed a great game based on the Phantom of the Opera. With ...
Software:
NetEnt
Reels:
5
Paylines:
40
RTP:
96.57%
Volatility:
Medium