Available at all Betsoft supported casinos here comes the Reels of Wealth progressive jackpot slot game to potentially turn your life around. This game is a jewel theme which brings high quality graphics and gameplay alike, thanks to a touch of innovation from a top-notch developer.

With an average return to player percentage (RTP) of 95.29% this is a medium variance title which will reward you with frequent wins, albeit not that lucrative ones. However, that can all change in a heartbeat.

The most patient of players could still be in for a major payout thanks to four Megastar Jackpot features offering possibly life-changing rewards. 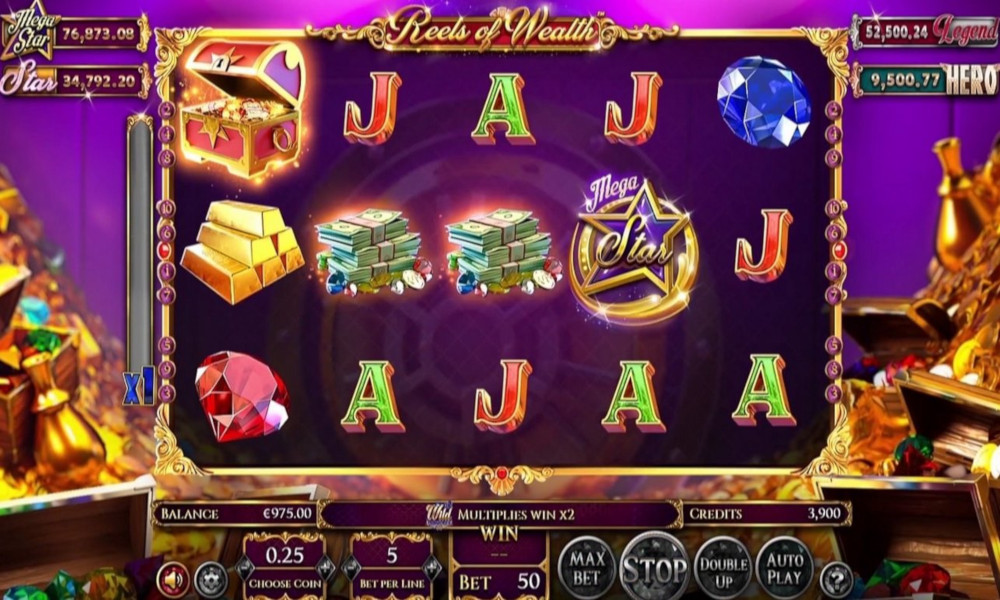 HOW TO PLAY Reels of Wealth?

Reels of Wealth is all about – well – wealth. The visuals themselves ooze extravagance as you make your way through the likes of treasure chests, gold bars, coins, bags of gems, cash and different coloured gemstones.

Reel background is obviously taking you into a vault filled with all kinds of golden treasure and valuables we all crave for. It’s up to you to unlock the door and dive into the fortunes beyond comprehension as you keep lining at least three matching symbols on a payline.

Before you actually start spinning the reels, make sure to go over game controls and adjust the gameplay to your own liking. Different options such as Max Bet, Auto Play allow you to customize the game, whereas choosing the adequate coin value is perhaps the most important part of it all.

Reels of Wealth is available from as little as €0.10 per spin, whereas the maximum bet goes up to €100. Knowing it’s a progressive title offering a chance to win huge payouts, it could be said this Betsoft title will generate a wide playing audience.

Reels of Wealth slot features an action-packed gameplay. The action starts straight from the base game and moves up towards the main attraction – the Progressive Jackpot game, which offers no less than four jackpots to grab from.

Double Up Game – Any standard wins during the base game are subject to Double Up feature which is quite a popular addition in slots. Commonly referred to as the Gamble feature, this particular option is different to others of the sort as it gambles 50% of your winnings as many times as you wish.

This is a classic Heads or Tails game with all correct guesses boosting your base game wins by 50%. When you’re done, just hit the Collect button and fill up the bag.

Rolling Wins – Betsoft made sure to make Reels of Wealth as interesting as possible and that’s exactly why they incorporated this feature which rewards a Free Re-Spin after every line win. After the third consecutive re-spin, your wins will be doubled. Should you get as lucky as to line up eight (or more) spins in a row, your wins would go under the 3x multiplier.

Wild Multipliers – Any line win which includes a Wild symbol in it will be multiplied by 2x. There is a big twist here, however, as two Wilds inside a winning combo will push your wins 4x up. Wilds stand for all symbols in the game except for the Scatter.

Scatter Wins – Represented by a vault door, the Scatter is considered the most valuable symbol in the game. This particular icon pays when at least one appears on the reels. The luckiest of players will of course send a kiss towards the Lady Luck if them manage to fill the entire grid with Scatters. Why? Because fifteen of those win 20,000 coins.

Megastar Jackpots – Three or more Megastar bonus symbols anywhere on the reels will initiate the mini-game feature which is played on an alternative set of reels. It’s basically a Free Spins round, but with a progressive jackpot spin.

The Megastar Jackpot feature deploys a unique ‘Trail System’ which has players collecting special Jackpot symbols during the aforementioned Free Spins. These special symbols will explode on the reels with new symbols cascading into their positions. Your aim is to collect 7, 8 or 9 Jackpot symbols to collect Hero, Star, Legend or Megastar jackpot, respectively.

Betsoft’s Reels of Fortune is a highly eventful game which introduces players to the world of luxury and gives them an inside view of what their life might look like if they hit any of the four progressive jackpot bonuses hidden in this particular game.

This slot is a 5 reel and 10 payline presentation with impressive graphics and even more majestic gameplay. Starting off from the base game where you get Rolling Wins and Wild Multipliers, there’s much more to look for here.

The biggest attraction is definitely the Megastar jackpot feature during which you get to claim a different number of free spins to collect special Jackpot symbols and win a corresponding prize. Sounds interesting? That’s because it is!

WHERE TO PLAY REELS OF WEALTH FOR REAL MONEY:

Players, we need your help with how we should to rank and rate these reviewed casino games. You can help us by rating this game, and if you really enjoyed playing Reels of Wealth. You can also share it with your friends on Facebook, Twitter and via email. For all freeplay games, if your free credits run out, simply just refresh the page and your balance will be restored.

PLAY REELS OF WEALTH AT THESE TOP RECOMMENDED CASINOS

Mr Vegas
There are many great slot games that feature a Vegas theme, but when it comes to ...
Software:
Betsoft
Reels:
5
Paylines:
30
RTP:
96.50%
Volatility:
Medium

The True Sheriff
Betsoft has been creating some of the most amazing slot games for many years and ...
Software:
Betsoft
Reels:
5
Paylines:
30
RTP:
97.03%
Volatility:
Medium

Frankenslots Monster
When it comes to monsters, Frankenstein is one of the most known around the world. ...
Software:
Betsoft
Reels:
5
Paylines:
20
RTP:
96.8%
Volatility:
Medium