Built around an insanely popular TV show which has been lighting up our hearts since 1997, the South Park slot game is its equally popular and exciting online gaming version. Produced by one of the biggest names in the industry NetEnt, South Park slot is available across all platforms and devices.

The South Park slot game is a standard 5 reel low variance slot with 25 paylines and an incredibly action-packed gameplay. It is an affordable game which fits well into the wallets of slot enthusiasts and high rollers alike with its wide range of active bets.

There is plenty to hope for and expect from this NetEnt’s branded title which brings forward no less than 4 different mini games, an opulent array of extras and bonuses that will keep you at the edge of your seat. 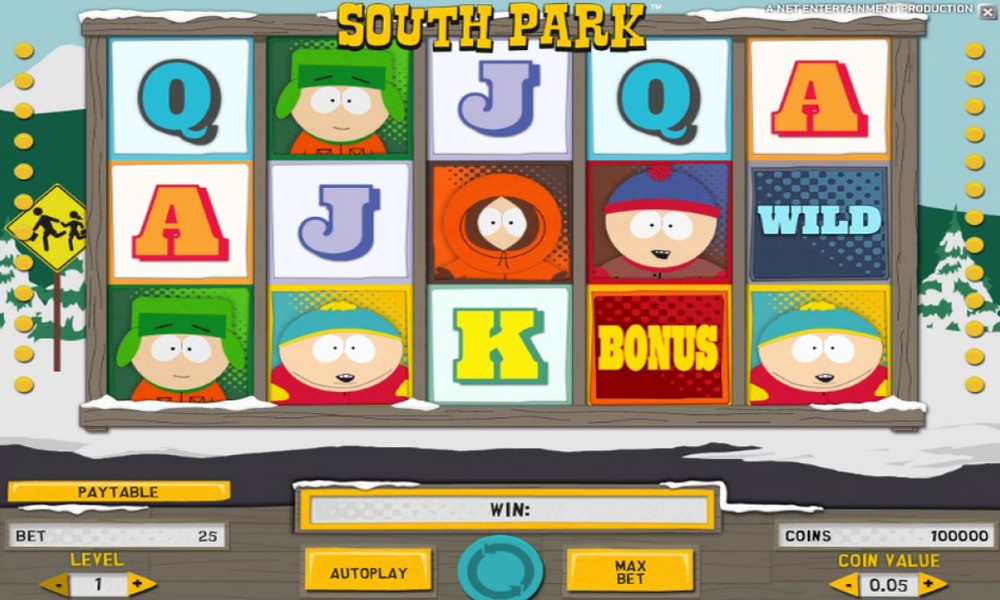 HOW TO PLAY South Park?

NetEnt’s South Park slot game comes with a recognizable graphical layout. Those badly drawn characters are represented in the same manner here in this game, bringing them all to life with audio clips taken from the show completing the overall South Park experience.

Before you spin the reels in this exciting NetEnt title, make sure to select your bet range which goes from €0.25 all the way up to €125.

The game pays for combinations of at least three matching symbols lined up in a payline starting from the leftmost to right. Cartman is the game’s Wild and the most valuable symbol as well, offering 750 coins for five in a row. Complimenting the group of four main characters in the game, there is a selection of classic playing card letters from J to A.

South Park comes with so many different bonus features that it’s quite hard to lay them out in a comprehensible manner. The action, however, starts with 4 Bonus Games which are activated by 2 regular Bonus symbols appearing anywhere on reels 3 and 4 only. These two Bonus symbols will launch a character linked bonus game when a Character Bonus symbol also lands on the fifth reel in a three-bonus symbol line-up.

Kyle Bonus Spins – rewards players with 10 free spins during which you will be hoping to land the Ike Wild symbol. Once you get it on reel 5, Ike will come down from the playing grid to stand on one of the tiles below the reels to activate one of five inside bonus features.

Kenny Bonus Game – you are tasked with guiding Kenny safely through different types of zones – the Win, Multiplier and Danger Zones. The Win zone is filled with coin wins, while different multipliers come with the multiplier zone. As for the danger zone, it contains one trap and coin wins.

Cartman Bonus Game – comes with 4 randomly triggered prizes – coin win, double up, reset or warning game over. You will have to select from one of eight bushes to reveal the prizes or get busted and returned to main game. Total win in this game is capped at 500x your triggering bet.

Stan Bonus Spins – is all about the sticky wild, which appears on any reel and substitutes for all symbols on the grid. This symbol will appear in the central position at reel 3 at the beginning of the bonus spins and will remain there for the duration of two spins. During the Stan Bonus Spins feature additional sticky wilds can land to prolong the complimentary reeling.

In addition to the four bonuses described above, South Park features a Terrance and Phillip Mini Feature which randomly puts three Wild symbols anywhere on reels 2 and 3 to additionally boost your winning potential.

South Park fans needn’t worry, NetEnt have done a truly wonderful job to create a slot worthy of the TV Show’s reputation and stature. Starting from the trademark graphic signature of this sitcom to its unique sounds and audio effects, this game ticks all the boxes to be called a worthy slot tribute to South Park.

This 5 reel and 25 payline video slot is an honest representation of everything people love with South Park as it’s filled with the same level of brutal satire and unique humor you can hardly encounter elsewhere.

The most amazing thing about the South Park slot game is the fact it’s feature-packed. NetEnt incorporated four different Bonus features which include sticky wilds, free spins, multipliers and coin prizes meaning there will be plenty of stuff to keep you occupied throughout.

WHERE TO PLAY SOUTH PARK FOR REAL MONEY:

Players, we need your help with how we should to rank and rate these reviewed casino games. You can help us by rating this game, and if you really enjoyed playing South Park. You can also share it with your friends on Facebook, Twitter and via email. For all freeplay games, if your free credits run out, simply just refresh the page and your balance will be restored.