We already talked about the appeal of online casino games in Asia. In some of our previous posts, we even tackled the subject of the most popular casino games that Asian players love.  But what about Indian-themed slot games?

So far, we did not mention slot games – and they are certainly quite popular.

Moreover, slot games are thematically diverse, which means there is hardly a topic that hasn’t been covered in online slots.

One of the themes that we – as well as our players – quite like is the theme of India.

As you already know, India has a rich culture that is a fertile field for inspiration when it comes to creating games.

Hence, we wanted to share with you the best Indian-themed online slots that we have been playing for years. Have a look:

Get ready for vibrancy, joy, and over-the-top aesthetics, because it’s time to see our top 10 Indian-themed online slot games! 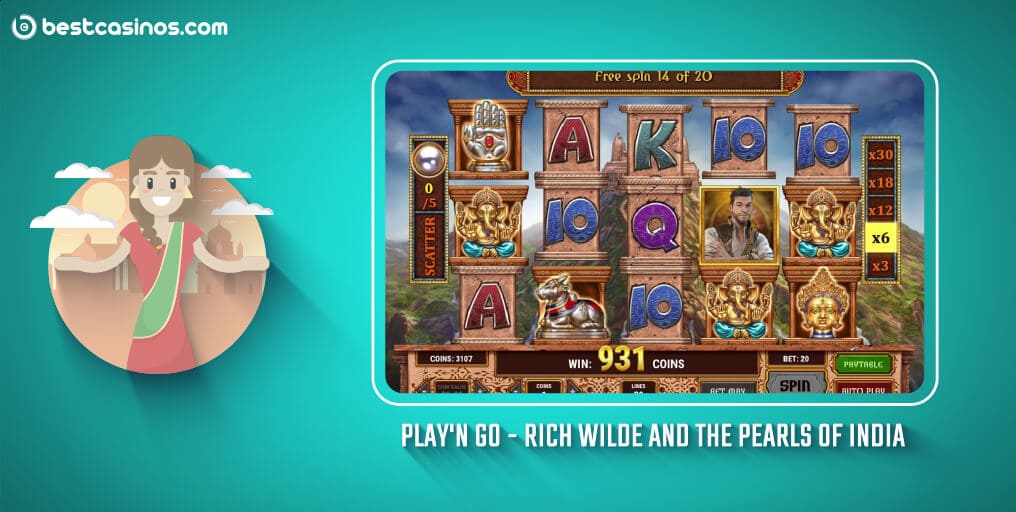 By now, everyone has heard of the legendary explorer Rich Wilde. Play’n GO’s a fictional character is easily the most recognizable slot hero in the entire global industry. That feat was not easy to accomplish, and his career spanned a whole franchise in the Play’n GO portfolio.

Pearls of India takes the players on an adventure with Rich that happens to be in India. This beautiful country is the setting and landscape behind the reels. Rich is the Wild of the game (of course), and he substitutes all icons on the grid (except Scatters).

This popular release is a 5-reel cascading slot that boasts 20 fixed paylines. You can access heaps of features with young Rich, including a bonus game where you pick one of three temples to visit. Each temple holds many secrets and surprises, and it is up to you to crack them and find the riches. 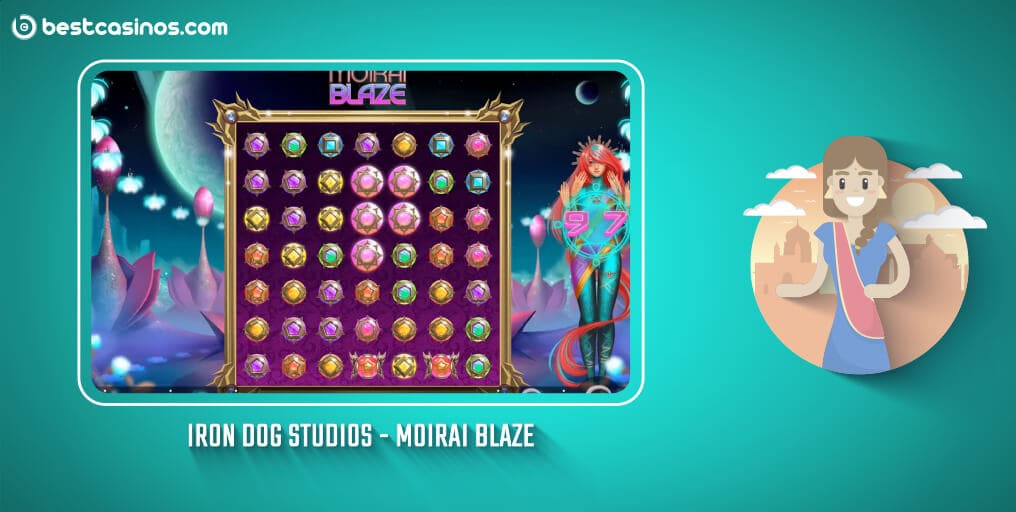 Moirai Blaze might be an unfamiliar release, but we are confident that the author Iron Dog isn’t. Iron Dog is, you guessed it, one of the most successful independent studios that work with Microgaming. In fact, many of the new popular Microgaming games stem exactly from this developer.

Because it comes from such an aspiring game producer, Moirai Blaze had no other option than to be a success. The 7×7 video slot is an oddly satisfying release with a futuristic vibe that centres on the Diwali lights festival. Lakshmi, the goddess of wealth, is your guide on this fantastical adventure. You can win heaps of goods with her, including Multipliers, Free Spins, and Bonus Symbols.

If a mixture of futurism, fantasy, and ancient Hindu mythology sounds right for you, we recommend trying out Moirai Blaze. You will not regret playing, because this is genuinely a one-of-a-kind-experience. 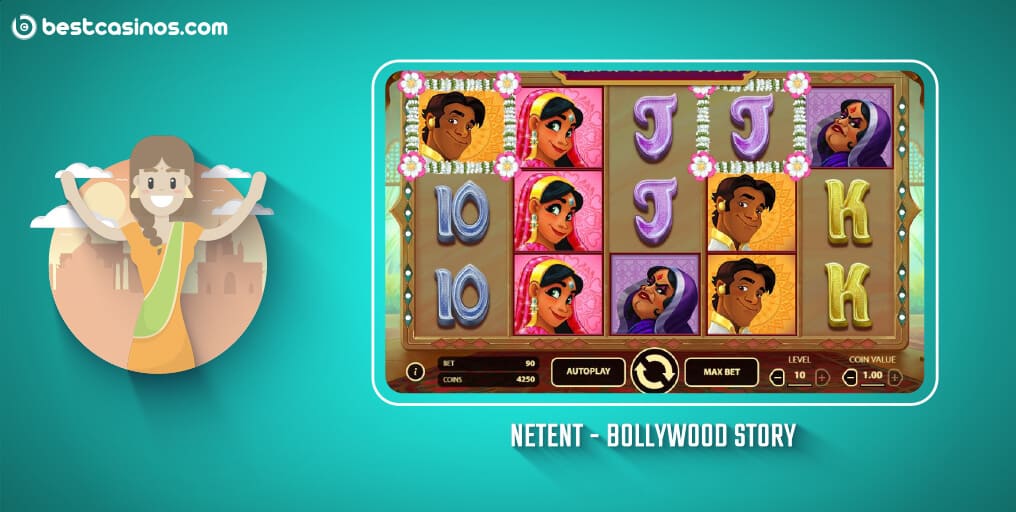 If transcendence and spirituality are too big of a bite for you, we suggest refocusing on some more secular themes. For instance, Bollywood? The Indian film industry is famous as the largest film industry in the world. Yes, that includes Hollywood as well – Bollywood surpassed its American rival many years ago.

Now, what’s the story of Bollywood Story? NetEnt is ready to show you! The industry-leading game developer’s contribution to our list is Bollywood Story, a 5×3 cartoonish drama slot that you’ll love. Drama is everywhere, as you would expect in a Bollywood movie, but don’t worry – love will prevail! Use the Floating Wilds and Free Spins to boost your winning and reach the happy ending. You also have 9 paylines at your disposal for generating big wins. 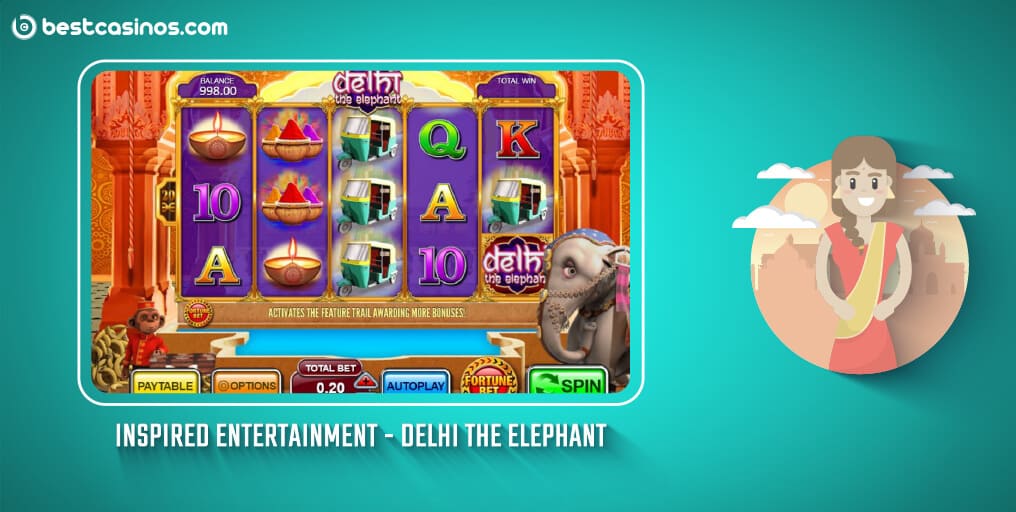 India is the home to Indian elephants, one of three subspecies of the Asian elephant. Hence, it is not surprising that elephants are some of the most prominent animals in Indian culture. Plus, people around the world love them because of their noble and playful nature.

Delhi the Elephant accentuates that playful side of elephants. Inspired Gaming’s release is a colourful adventure that takes you straight to an Indian palace in Delhi. The reels are peppered with typical Indian paraphernalia: jars, scented candles, spices, even a New Delhi taxi! The Special features include Delhi and Mumbai scatters that land during the Peacock feature. Use the Splashing Wilds and Mystery Banana symbols to boost your winnings and trigger more features. 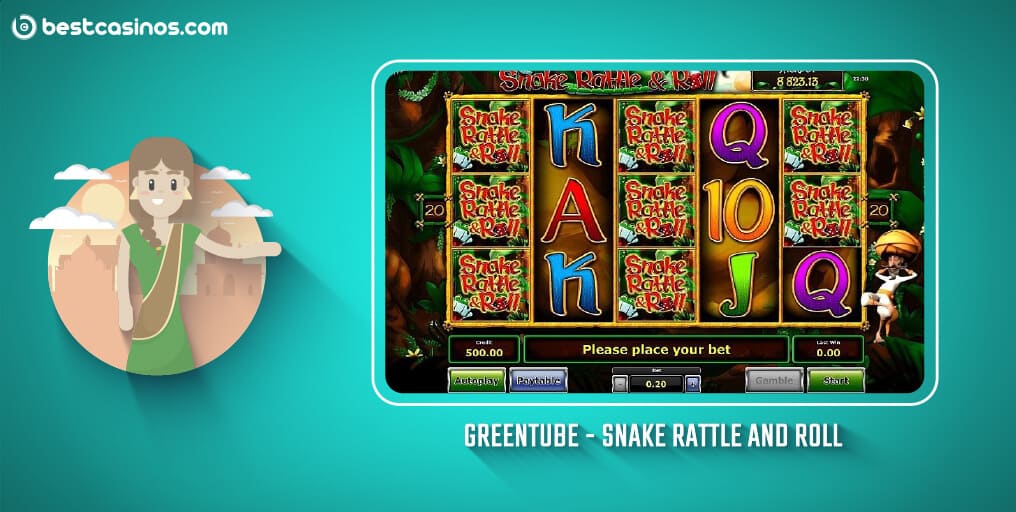 Greentube’s Snake Rattle and Roll is a charmer, that is for sure. Novomatic’s interactive division pulled all the stops with this one. This 20-line slot with five reels is all about charming snakes. Don’t you believe us? Have a look at the unique features!

Among the features, Snake Rattle and Roll has a Snake Charmer, a Snakes and Ladders, as well as Free Spins. The Charmer uses his flute to lure additional Wilds to the reels where they remain until the end of the round. Moreover, with Snakes and Ladders, you get to boost your balance, activate Free Spins, and potentially win a massive jackpot. Indeed, the game has low volatility which often confuses the players into thinking this is a low rolling slot. However, that is far from the truth, as Snake Rattle and Roll has a progressive jackpot. 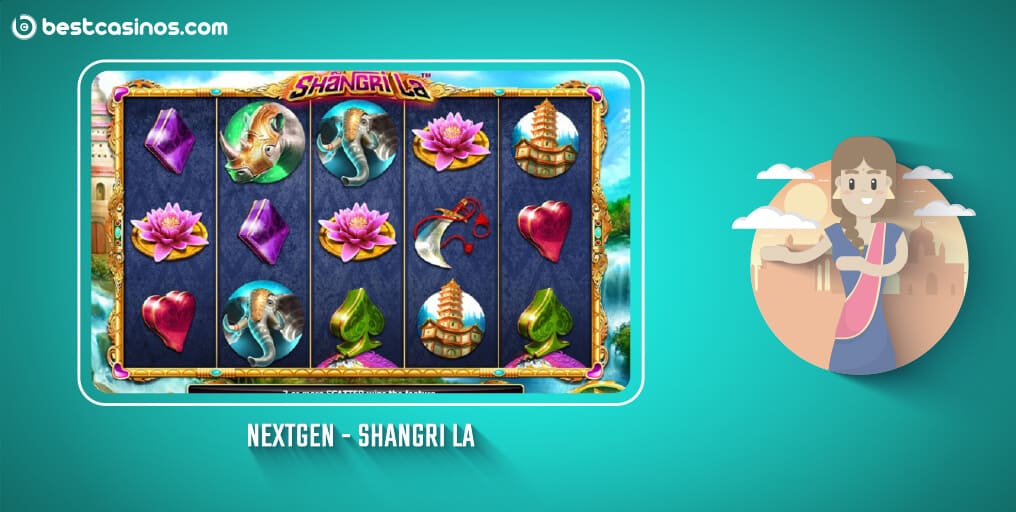 Although NextGen is not the only game developer that focused on the distant and dreamy city of Shangri-La. NetEnt’s the Legend of Shangri-La is another popular release that you can check out after NextGen’s game.

Thematically, Shangri La is not purely Indian – but the theme overlaps and intertwines Indian and Asian influences. And many players like combinations of themes in slot games – Moirai Blaze is a great example for that. In Shangri La, you will have 15 lines that power the grid. The Oriental adventure promises great payouts if you are lucky enough to trigger the Free Games, Super Free Games, or Bonus Chest feature. 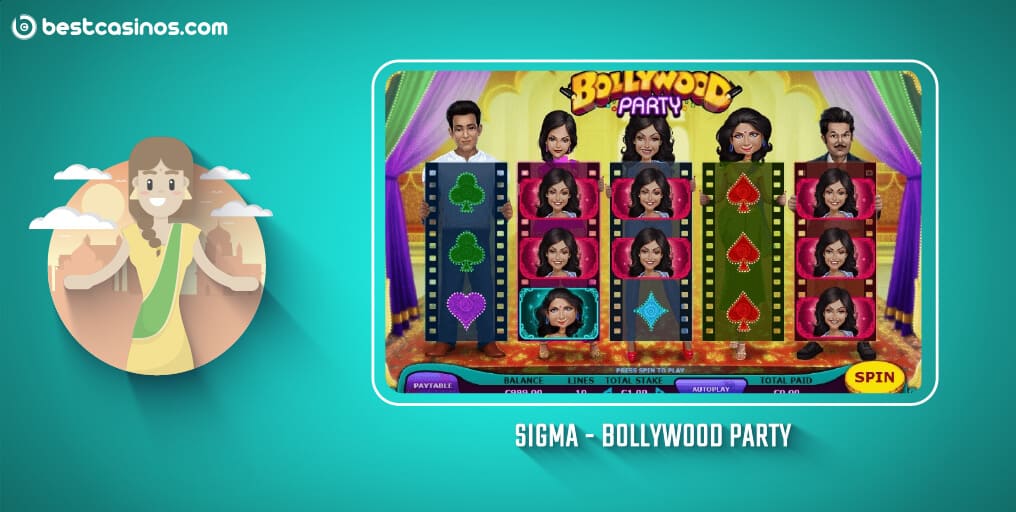 After our adventure in the Oriental mountains, it’s time to get back to Bollywood. And we know a perfect candidate for that: Sigma and its Bollywood Party video slot. Believe us; this game is off the charts because it entirely envelops everything Bollywood stands for: drama and entertainment. You can find this game in all major online casinos. For instance, our favourite go-to options are Indian slots at Wishmaker casino.

The party at Sigma Gaming’s video slot is in full swing. If you ever wanted to visit a Bollywood-style party, this is your chance. There is even a dance floor where you can show off your moves in the Bollywood Dance Streak Bonus feature. Despite its vibrant nature, the game is mild – low to medium volatility and small-scale jackpots round of the pleasant experience. 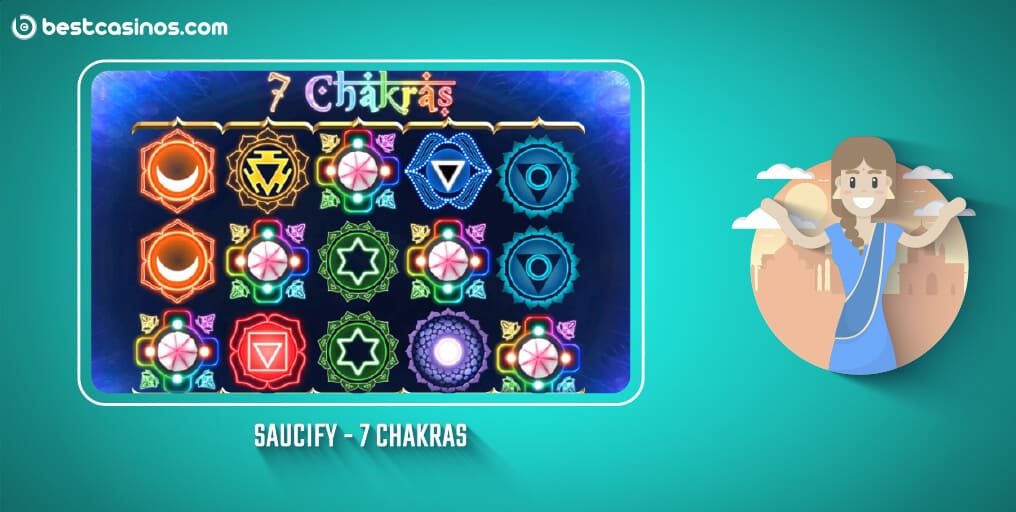 After a brief respite with glitzy and glamorous Bollywood Party, it’s time to change the scenery. And we are taking you straight to the Saucify’s video slot 7 Chakras. Rumour has it that the game is capable of healing all worries and doubts using only top-tier entertainment. If you have any doubts, try it out!

Five reels and 49 paylines are enough to trigger delectable bonuses. Among the best features in the game are Stacked Wilds, Multipliers, and a Bonus round yields Free Spins and Multipliers. What more can we ask for? 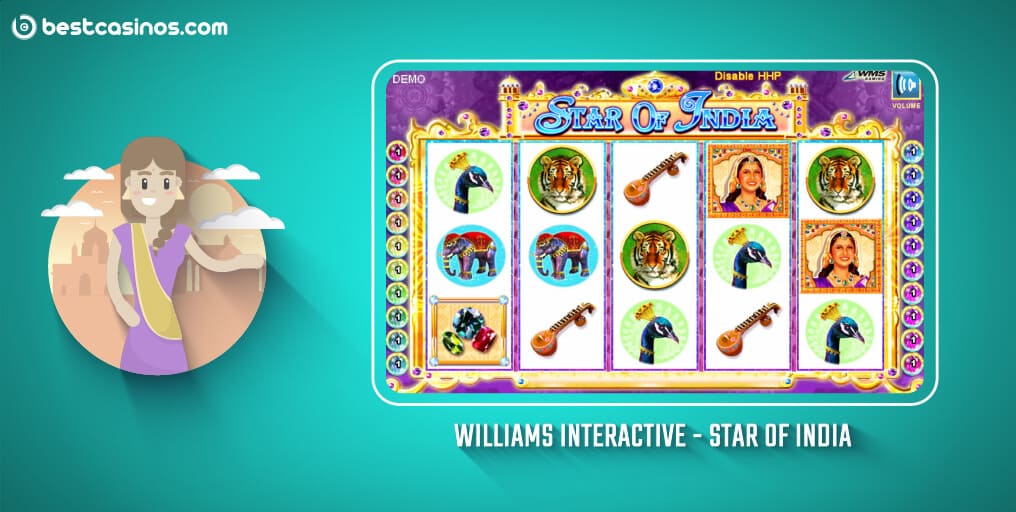 The Star of India is not a real-life jewel, but it is certainly precious in the online slot community. Williams Interactive, a company that we also know as WMS, is a champion of making video slot games. Its Star of India slot that we are about to show you is a perfect embodiment of WMS expertise.

Acquiring wisdom and riches in Star of India will not pose any problems to you. All you need to do is Spin and hope to land enough Scatters because Free Spins are the main feature of the game. In the special mode, you get to play with 8 extra rounds. Plus, you can re-trigger the feature with additional Scatters during extra rounds.

10.  Jewels of the Orient – Microgaming 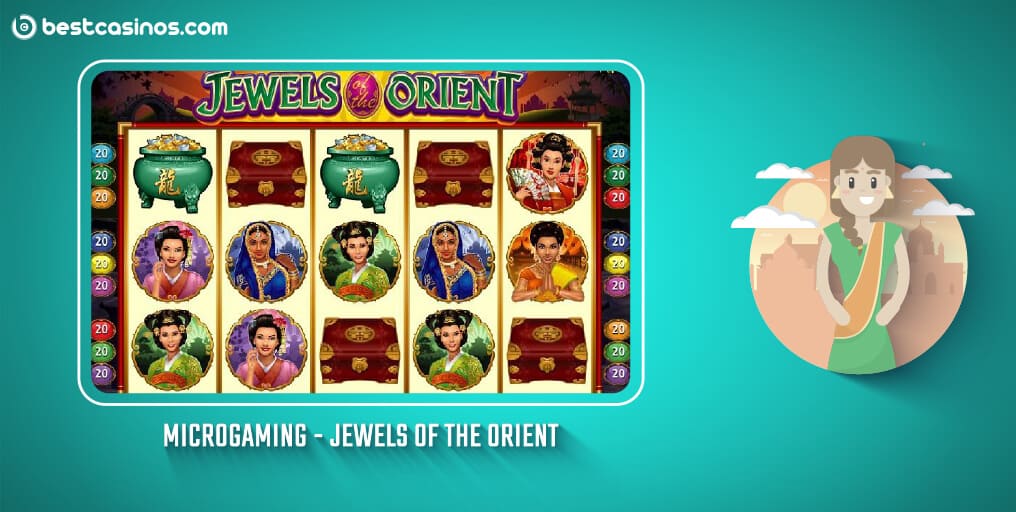 The final game on our list is a combination of Oriental and Indian influences. And who else is better to deliver that than the pioneer of iGaming Microgaming? Jewels of the Orient is a breath-taking release that combines elements of several cultures into one potent game. We placed it on our list precisely because it combines the Indian theme with Asian elements, another quite trendy slot theme.

Inside Jewels of the Orient, players can enjoy playtime on five reels using 9 paylines. There are not many special features, but the ones that are here are more than enough. Namely, you can play with Wilds and Free Spins, in which case you can acquire up to 40 extra rounds. There are also big prizes to claim.