You don’t have to be Sherlock Holmes to figure out what this Merkur Gaming powered slot game is all about as the title itself is quite revealing. Built around your favourite crime solving detective this 5 reel and 20 payline slot is a popular choice with all of Merkur Gaming supported online casinos.

An attractive dark design of the 221B Baker Street goes well with the overall subject of the game but it’s more than appropriate looks that will have you fall in love with this slot title. Engaging selection of features will keep you entertained and rewarded as well.

Merkur Gaming made sure to optimize it fully for all mobile devices and even include some of the features such as the Left Hand-Right Hand option to help you choose your preferred side are available for smartphone and tablet devices only. 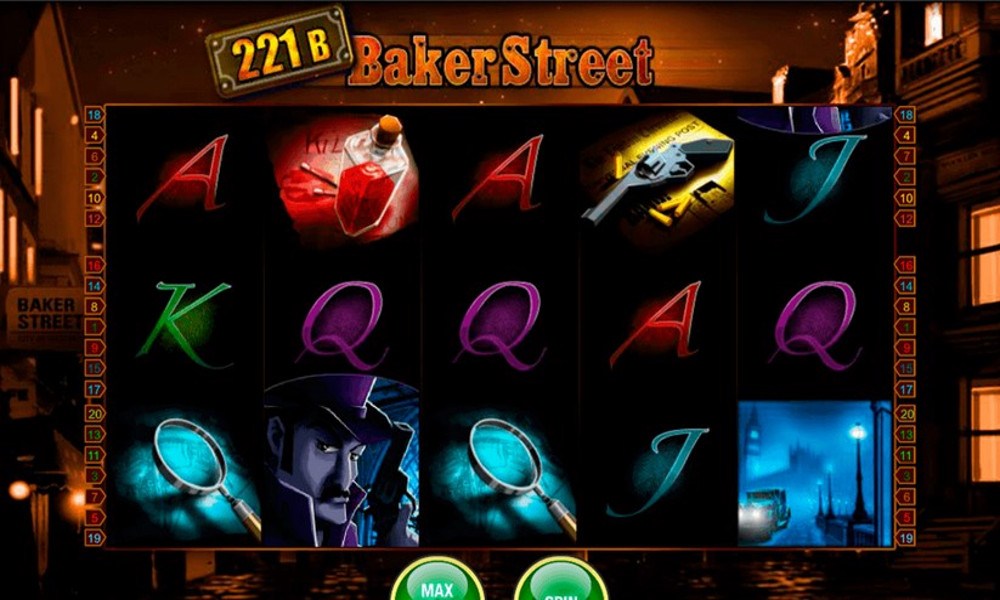 HOW TO PLAY 221B Baker Street?

This medium variance game from Merkur Gaming is quite simple and straightforward to play. It does not, however, take away anything of its allure. The game will reward you for combinations of matching symbols starting from left to right – on any of the adjustable 20 paylines. You can play at either 1, 5, 10, 15 or the maximum 20 win lines.

Before you hit the Spin button, however, make sure to adjust all the playing options and customise the playing mode to your own preference. Merkur Gaming have made their 221B Baker Street slot quite easy to go around with icons and buttons guiding you nicely throughout. Choose your stakes, number of lines , number of autostarts if you wish to have the action automated and – enjoy.

The 221B Baker Street slot is an action-rich game with plenty of features that will make your time worthwhile. The German gaming giants have done their absolute best to create and engaging and equally rewarding game.

Gamble: a popular game feature – gamble – will add an extra appeal to any game’s base gameplay. Every winning combination in the game will present you with two icons – Collect or Gamble. The card gamble feature lets you choose the colour of the next card to potentially double your initial winnings. There’s also a Leader Gamble option that is marked by a 1:1 button taking you up or down for a controlled gambling of your win. Merkur Gaming are truly taking the Gamble option to another level thanks to their Collect Half option which will halve the card gamble stake with the saved stake booked as winnings.

WIld + Scatters: The Wild symbol is represented by Sherlock the man himself who stands for any other symbol in the game except from his nemesis Moriarty – the Scatter. Surprisingly, there is another Scatter in this game, represented by the Duel symbol. Both Scatters pay in any position on the grid.

Duel Bonus: This feature occurs on the middle reels when Moriarty and Sherlock shoot a field of random prizes when three Duel symbols appear on the grid. You will be given three to five duels in a random order. Once the feature is over you can either discard the current offer to have another shot at a bigger prize or accept it.

Free Games: everybody’s favourite feature is triggered once you get three or more Big Ben symbols on the grid. You will then be prompted to choose the Big Ben symbol and reveal the number of free spins with the game multiplier.

Multipliers are either 2x or 3x during the free spins. This feature can be retriggered and each free game will give you an additional set of complementary rounds with another bet multiplier.

The 221B Baker Street is a rather positive surprise. Not many slot players can say they’ve heard of Merkur Gaming before but this name is a proper giant in European gaming circles and enough of a guarantee for the game’s quality.

The subject itself is popular enough and all of the action lovers will enjoy playing with Sherlock Holmes and his enemy Moriarty, who will get engaged in a proper Duel to give you some rather rewarding prizes.

If that doesn’t entice you, there is always a traditional Free Games feature during which you can hope to land up to 20 complimentary spins of the reels with a 3x multiplier. Knowing that you can retrigger it will add an extra dimension as you can potentially land some lucrative payouts off a game with a 10,000 coin top jackpot.

WHERE TO PLAY 221B BAKER STREET FOR REAL MONEY:

Players, we need your help with how we should to rank and rate these reviewed casino games. You can help us by rating this game, and if you really enjoyed playing 221B Baker Street. You can also share it with your friends on Facebook, Twitter and via email. For all freeplay games, if your free credits run out, simply just refresh the page and your balance will be restored.

PLAY 221B BAKER STREET AT THESE TOP RECOMMENDED CASINOS