Magic Mirror is a fairy tale themed slot game coming from the creative kitchen of Merkur Gaming. And although the title is enough to suggest a certain subject, there are several other fairytale symbols and items that make another reference.

This is a 5 reel slot machine with 10 winning lines which comes with a highly affordable wagering range. The maximum bet of €20 is not a frightening figure and we are fairly certain this particular Merkur Gaming product will attract a wide audience.

The players who decided to have a spin or two at the Magic Mirror slot can expect a chance to double up their wins via the Gamble feature while there is also a Free Spins feature which increases your chance of landing the 10,000 coin maximum prize. 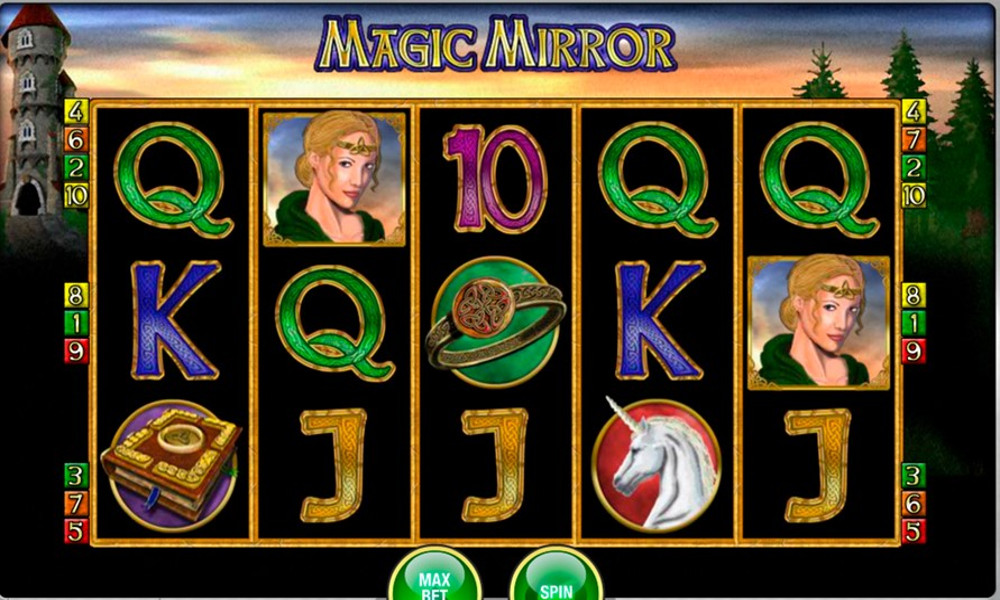 HOW TO PLAY Magic Mirror?

Due to a slightly generic graphics and a quite similar soundtrack, the Magic Mirror slot from Merkur Gaming offers a vintage land-based feel of a classic one-armed bandit. It’s not necessarily a bad thing as this 5-reel and 10-payline slot will take you back in time with its machine-like look.

Even though a mirror is a clear association of Snow White, the Magic Mirror slot comes with what looks like Rapunzel’s Tower, whereas the unicorn symbol definitely makes it a strange fairytale combination.

The aforementioned unicorn, the princess, a book and a ring are the high value symbols in the game, whereas the lower denominations include classic playing card symbols from 10 to A. Playing the game is fairly straightforward. A win is achieved by lining up three matching symbols from left to right.

Before you hit the spin button make sure to select your desired betting value. Magic Mirror comes with a wide range of betting options which start at €0.10 and go up to affordable €20 per spin.

Wild & Scatter – It does not happen too often that a single symbol stands both as a Wild and Scatter. That’s exactly the case with a shimmering blue Magic Mirror which will stand for all other symbols to help player create winning combinations but also trigger the game’s sole bonus feature.

Gamble Feature – Any win achieved during the base game is a subject to a Gamble feature where you will be given a chance to double the amount originally won. Merkur Gaming did well to tie in two types of this feature, both of which will be available on each side of the spin button after a winning spin.

Left Button: Pick a Card Gamble – players are required to predict the colour of a card drawn from the stack. A right guess will see you double the prize, whereas the wrong pick means losing the initial win.

Right Button: Ladder Game Gamble – this is a more elaborate gamble option based on skill rather than on luck. You are presented with a ladder-styled pattern with ascending wins and a green light going up and down on the rungs. Move it up by pressing the gamble button in order to get high-value payouts. It’s worth a note that this is not as easy as it seems.

Free Spins – Three or more magic Mirror symbols, in this instance acting as Scatters, will launch a Free Spins feature. There are 10 complimentary rounds to grab in this feature but that’s not all. One of the symbols on the reels will be randomly selected and expanded on every spin to further boost your chances of landing a win.

Magic Mirror is a fairy tale themed slot game from Merkur Gaming. It delves into the Snow White story with other elements that make it an exciting adventure off of a rather generic gameplay that will take you back to your favourite land-based casino.

This 5-reel and 10-payline slot machine is available on all devices and platforms. It can be played at coin values starting from €0.10 to €20 which is affordable enough to draw a wide range of players hoping to land the grand prize of 10,000 coins.

Magic Mirror houses a relatively straightforward and feature barren gameplay. The players will benefit from a gamble feature in the base game and up to 10 Free Spins with a randomly selected symbol that will expand to fill an entire reel.

WHERE TO PLAY MAGIC MIRROR FOR REAL MONEY:

Players, we need your help with how we should to rank and rate these reviewed casino games. You can help us by rating this game, and if you really enjoyed playing Magic Mirror. You can also share it with your friends on Facebook, Twitter and via email. For all freeplay games, if your free credits run out, simply just refresh the page and your balance will be restored.

221B Baker Street
You don’t have to be a Sherlock Holmes to figure out what this Merkur Gaming powered ...
Software:
Merkur Gaming
Reels:
5
Paylines:
20
RTP:
96%
Volatility:
Medium
VIEW ALL GAMES