Arcane Reel Chaos is being described as a superhero slot but such an attribute does not do justice to this 5 reel and 20 payline top-quality NetEnt product. This game is a far cry from what any slot player would expect compared to the likes of, for instance, Playtech-powered branded slot game The Flash.

This is a medium-volatility slot game with quite an intriguing base game and no less than four features to benefit from even before the proper action begins. NetEnt have made sure to create an equally appealing and engaging slot and we are certain the players will enjoy it thoroughly.

One of the latest additions to the ever-growing NetEnt portfolio, Arcane Reel Chaos is a product of an RTP worth 96.81%. The good people behind it have packed the game with a jackpot worth 242,500 coins and made it playable across all possible devices – desktop, tablet or mobile. 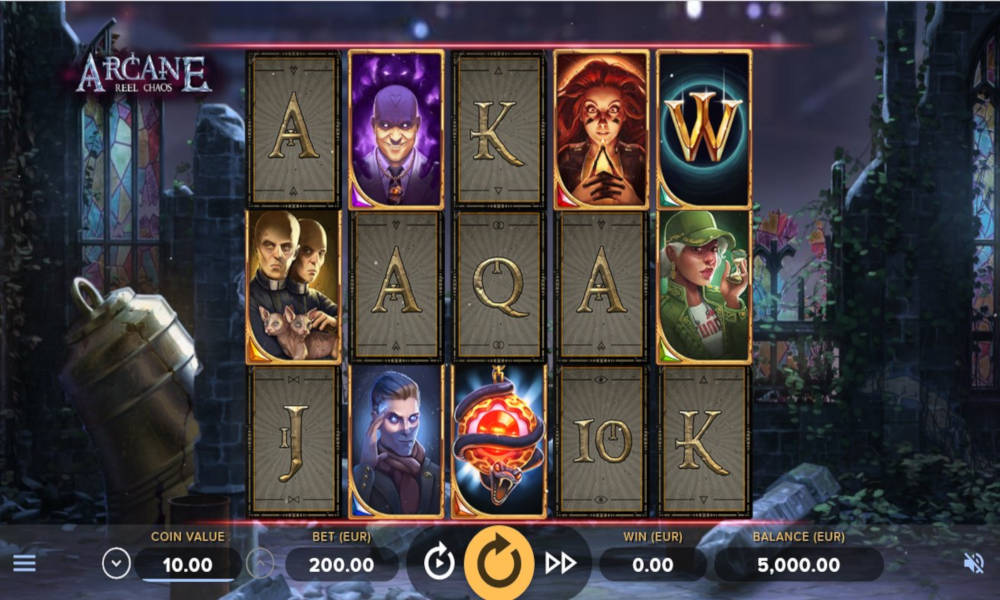 HOW TO PLAY Arcane Reel Chaos?

Arcane Reel Chaos slot game by NetEnt is a classic high-class production from this famous software developer. What we have before us is a superhero game, presenting a group of unlikely people with superpowers, who are not exactly the comic-book caped champions.

Situated in a ruined city, five reels bring raw action before you. A band of superhero mutants are bursting on the reels – all presented in high-definition and remarkably subtle production – ready to fight their nemesis.  NetEnt is famous for its elaborate graphics and intricate designs and this game is not an exception to the rule.

However, behind all the complexity of looks there lies a classic 5-reel gameplay with 20 paylines and a series of base-game features. Arcane Reel Chaos, however, marks the first time NetEnt presented their brand-new Play user Interface (Play UI). It is designed to bring a better and user-friendlier way of playing, the Play UI is expected to be implemented in more games this year. It requires fast and reliable connection in order to make your playing experience as seamless as possible so we guess NetEnt are yet to perfect it.

The idea behind this game is to land at least three matching symbols. These are our four heroes – Psyop, Zero.X, Flare and Chrono – a collection of classic playing cards and the villain – Deep Pockets. A letter Wi is the game’s Wild, whereas a snake around the pendant is acting as the Scatter.

Arcane Reel Chaos online slot is actually a rather straightforward game with a classic gameplay which brings timeless entertainment combined with contemporary graphics and visual elements.

There are four base-game features in this highly-engaging NetEnt gem and that’s exactly where all the fun starts.

Free Spins – three Scatters appearing on reels 1, 3 and 5 will activate the Free Spins feature. It is right here that your superheroes get to fight their enemy – Deep Pockets. There are up to 4 stages of fight. Deep Pockets starts with a different amount of health points which differ through stages:

Passing each level will take you higher and higher while defeating the villain will grant you an additional bonus win on top of the feature wins. Quite a touch by NetEnt.

NetEnt has a reputation to maintain and we’re glad to find out the company once again proved they are leaders in the field of slot development. Arcane Reel Chaos has it all – well almost if we’re being honest: Great graphics, engaging gameplay and a piece of innovation which is yet to be perfected and presented in the brightest of shines.

The new user interface is not as smooth as we’d like it to be. It slows down the reels and would break completely from time to time – in case your connection gets slower. However, this online slot has got all the entertaining elements to compensate for any possible downsides.

Main-game random features are the major deal here, while the battle-inspired free spins are putting the icing on a superhero cake. This medium variance slot is engaging and entertaining enough but still a far cry from being worthy of a ‘groundbreaking’ attribute such as alternative NetEnt titles.

WHERE TO PLAY ARCANE REEL CHAOS FOR REAL MONEY:

Players, we need your help with how we should to rank and rate these reviewed casino games. You can help us by rating this game, and if you really enjoyed playing Arcane Reel Chaos. You can also share it with your friends on Facebook, Twitter and via email. For all freeplay games, if your free credits run out, simply just refresh the page and your balance will be restored.

See all of our Slots game reviews where you can play 547 slots games for real money in any of our recommended casino sites.

Dead or Alive 2
Dead or Alive 2 is the highly-anticipated slot sequel from NetEnt with 5 reels and ...
Software:
NetEnt
Reels:
5
Paylines:
9
RTP:
96.80%
Volatility:
High

Jack Hammer 2
There are many different video slots that have a comic book theme, but with Jack ...
Software:
NetEnt
Reels:
5
Paylines:
99
RTP:
97.10%
Volatility:
Low

Coins of Egypt
Spectacular in every sense of that word – both from the visual and mechanical aspect ...
Software:
NetEnt
Reels:
5
Paylines:
20
RTP:
96.97%
Volatility:
Medium

Arcane Reel Chaos
Arcane Reel Chaos is being described as a superhero slot but such an attribute does ...
Software:
NetEnt
Reels:
5
Paylines:
20
RTP:
96.81%
Volatility:
Medium
VIEW ALL GAMES