This game is a 5 reel and 20 payline slot playable at all devices and platforms. Portraying the times of old and times of divine magic, this NetEnt pearl is a fast-paced product filled with exciting features.

In addition to the Avalanche mechanic, players spinning the reels on the Asgardian Stones slot will benefit from Colossal crushes, a Bonus Wheel, Free Spins and multipliers. 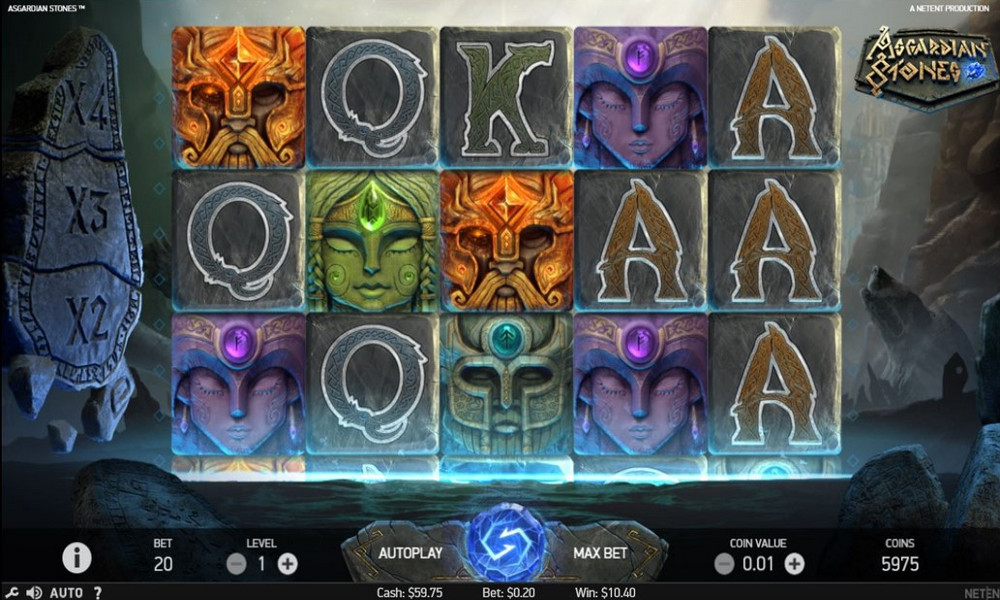 HOW TO PLAY Asgardian Stones?

With reels floating above the water, surrounded by a gloom background, Asgardian Stones playing grid overlooks a magical kingdom and i na way protects it from evil. Stones signifying different multiplying values are floating on the left side of the reels, adding to the overall visual appeal of this dark and mysterious theme.

Game controls are suitable placed below the reels with runes shining through from behind. Asgardian Stones slot game comes with ten different betting levels which take your wagers from as low as €0.20 all the way up to €200 as the maximum bet. On each side of the pulsating, blue spin button there is an Autoplay option and the Max Bet button.

Playing the Asgardian Stones game is rather simple. All you need is to land three matching symbols on a payline from left to right in order to claim a win. The symbols do not spin – as it’s usual – but rather fall from above in a popular Avalanche method which is quite rewarding knowing that the game can give you multiple wins off of a single spin. Each time a winning combination is formed, winning symbols will disappear from the grid and will be replaced with new ones falling from above to reward you with a re-spin of sorts and potentially give you an additional win.

As it’s the case with any other NetEnt slot game, in addition to being beautifully built and designed, Asgardian Stones slot comes with a smooth gameplay embedded with some rather exciting features.

Wild – In the absence of the feature-triggering Scatter, the Wild symbol deserves an honourable mention as an icon – depicting a letter W – which stands for all other symbols in the game. It effectively boosts your chances of landing a win on every spin thanks to its versatility.

Colossal Symbols – All symbols except for the Wild can appear as Colossal Symbols – combinations of 2×2 or 3×3 symbols as one. They will be partially or fully displayed on the grid, depending on how they land. This way, only a part or a full colossal symbol can take part in a winning combination. Either way, these symbols will explode in full on a winning spin to make way for new symbols and to increase your winning potential.

Colossal Crush Feature & Multipliers – is available both during the main game or during the Free Spins. It’s triggered after the first Avalanche when a Colossal symbol will drop from above to crush any symbols that stand in its way. Each time it falls down a row and crushes at least one symbol along the way, a multiplier will be rewarded – going up to x4. Colossal Crush feature stops when a Colossal symbol reaches the bottom of the grid.

Bonus Wheel Feature – is all about the Bonus Wheel symbol – a 3×3 formation which can only land on the last 3 reels. It can land either partially or fully visible and will throw the following wins towards the players:

Combined wins are possible due to the fact the Wheel has three open spaces that will account towards the reward. Unlike all other regular symbols, the Bonus Wheel will not be removed after the win, which ultimately means there will be no Avalanche after its wins are evaluated.

Free Spins – as one of the most attractive features in slot games in general, Free Spins take a prominent role in the Asgardian Stones slot as well. Those three winning fields in the Bonus Wheel Feature award five free spins each meaning players can win 5, 10 or 15 complimentary rounds. To top it all up, NetEnt have decided to make the Wild a colossal 3×33 symbol during this feature. Once the Colossal Wild is part of a winning combination, it will split up in individual symbols. Those wild symbols that are part of the win will disappear whereas the others will remain on the reels until they account for the win themselves. During the Free Spins players can hope to land the Bonus Wheel as well. The Wheel can reactivate the Free Spins feature – rewarding players with up to 25 additional free spins.

Nordic world of magic is an extremely popular subject across the entertainment industry and gaming world is not exempt from it. NetEnt have done remarkably well to latch on the theme with their Asgardian Stones slot which has managed to generate plenty of attention during the little time it’s been out.

Players can hope to get plenty of action in this 5 reel and 20 payline slot game which uses the Avalanche feature. Symbols drop down from above the grid instead of spinning around, which is the ideal mechanic for those who can appreciate the gift of a re-spin each time a winning combination is formed.

Additionally, Asgardian Stones slot is packed with features  – multipliers, free spins and a Bonus Wheel – which add to the overall excitement and help you generate wins up to 2,000x your stake on every single spin.

WHERE TO PLAY ASGARDIAN STONES FOR REAL MONEY:

Players, we need your help with how we should to rank and rate these reviewed casino games. You can help us by rating this game, and if you really enjoyed playing Asgardian Stones. You can also share it with your friends on Facebook, Twitter and via email. For all freeplay games, if your free credits run out, simply just refresh the page and your balance will be restored.

Ozzy Osbourne
Ozzy officially has his slot! The prince of darkness is back in full glory. Thanks ...
Software:
NetEnt
Reels:
5
Paylines:
20
RTP:
96.30%
Volatility:
High