True Grit Redemption slot is a Nolimit City online slot with 6 reels, 20,220x payouts, and 96.11% RTP. The slot came out near the end of 2021, quickly finding its way to the top of all action-loving players’ lists. True Grit Redemption is a story revolving around multiple characters whom you might recognize from the media, pop culture, and books. On the outside, the game is a Western-themed slot, so as you might guess, there’s a lot of blood, guns, and shady characters. The main character of the game is a bit complex and leaves players much to unpack as she quite vividly resembles Greta Thunberg. However, she’s the titular Grit Girl, of whom you’ll learn more once you trigger the special features.

Speaking of features, please get ready to have your mind blown. In all honesty, Nolimit City was not playing around with this one – True Grit Redemption possesses an incredible collection of in-game boosters capable of confounding many a player inside. It will have you wrapped around its finger in no time, and before you know it, you will be watching the odd reels shoot wins and payouts to the screen without you realizing what’s happening. But we don’t doubt you will love it, as the main payout hits 20,220x the stake.

The technicalities are a bit easier to understand. The game has a high payout potential, but no prize is given freely. That puts you in the land of high volatility, and with 6 reels and a 96.11% RTP, you must fight to reach a payout. The highest possible bet per spin in True Grit Redemption online slot is €100, a classic bet limit for most online slots. Let’s read the rest of our True Grit slot review and try to decipher the game. 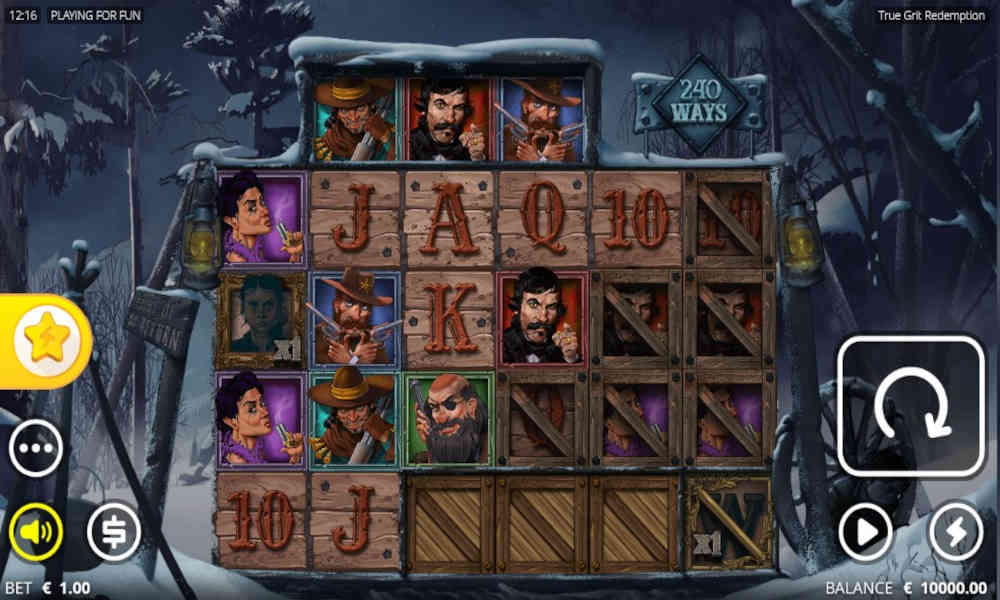 HOW TO PLAY True Grit Redemption?

Our introduction must have left you confused a bit. We apologize, but it’s hard to put into words the majestic work Nolimit City did with the True Grit Redemption slot. The game is amazing – it combines a set of incredible elements you’d never think of in the same dimension, let alone a single game. However, Nolimit City has once again proved it is a master of inventive games, and True Grit is precisely that – a creative video slot filled with diverse elements, eclectic features, and wild potential. The game’s main theme is the Wild West, and you will find yourself in the middle of nowhere, in the middle of the night, trying to solve the puzzle found on the poorly lit 6-reel grid. The grid, besides having six reels, has an unusual shape in terms of rows. The top layer presents a character-only row, frequently visited by Wilds as well. The other reels below spin and feature the full cast of symbols, while a portion of the grid remains locked. They are unlocked only when certain symbols hit them, but we’ll discuss that later. For now, it’s important to know that the top layer spins right to left, and the rows below spin the usual way. The game always starts with 240 winning ways, but the number increases with cascade wins.

To play the game, you first need to place a wager that’s at least €0.20 per spin. The highest wager available in the game is €100, available in all Nolimit City casinos where you want to play for real money. If you want to play for free, you need not bother – the game is available as a free demo slot in all freeplay casinos online. We would also suggest playing the True Grit slot for free first to get a hang of the rules. The features are aplenty, and they might confuse you at first. Therefore, try and get acquainted with them before wagering all you have. True Grit Redemption slot also has extreme volatility, which means it’s not to be trifled with.

In terms of features, you get to try and win between 0.2x the stake and 1.75x the stake for 5 matching symbols. The Grit Girt has the highest worth, paying up to 500x the stake for a combo of 4. Now that we’ve managed to explain at least a bit of the game, let’s go meet the game features.

True Grit Redemption slot is a Nolimit City slot, which means it’s available for real money at every Nolimit City casino. However, one must remember it’s also a video slot, so it’s one of the free casino games. You can play free demo slots including True Grit right here at BestCasinos or check our rich collection of free casino game sites online.

When Nolimit City makes a game, players know a feast is coming. And the True Grit Redemption slot is nothing short of a feast – with its countless features, there’s never a dull moment in the True Grit online slot.

True Grit Redemption slot is an online slot with six reels, 96.11% RTP and extreme volatility. It’s one of those feature-filled slots that capture and enrapture its players from the get-go. And most of the time, you won’t know what hit you!

The game is a surprising collection of in-game boosters, multipliers, wilds, and free spins. Wherever you look, there’s a prize waiting for you – so don’t miss it.

Nolimit city True Grid Redemption slot is a video slot capable of bestowing up to 20,220x the stake for a fantastic win. Play True Grit Redemption slot for real money and find out how lucky you are.

WHERE TO PLAY TRUE GRIT REDEMPTION FOR REAL MONEY:

Players, we need your help with how we should to rank and rate these reviewed casino games. You can help us by rating this game, and if you really enjoyed playing True Grit Redemption. You can also share it with your friends on Facebook, Twitter and via email. For all freeplay games, if your free credits run out, simply just refresh the page and your balance will be restored.