Lightning Roulette was one of the most talked-about games in 2018. Evolution Gaming presented the game at ICE that year, promising a never-before-seen experience in the live dealer studio. And indeed, that came true – Lightning Roulette was the Product Innovation of the Year at GGA Las Vegas 2018.

Lightning Roulette is a traditional game of European Roulette with a sprinkle of progressive RNG gameplay. The rounds play out like at any other table, up until the lightning strikes the wheel and randomly selects five numbers. Then, if the players hit a straight up bet, they can get a Multiplier that’s worth from 2x to 500x the bet. And there’s more to uncover!

Bets in Lightning Roulette start from €2. The maximum bet is capped at €10,000. As with most live dealer titles, here you get a 97.30% RTP and high volatility to enjoy. With the Multipliers and the engaging studio, this game is quite entertaining for all those who enjoy playing modern European Roulette. The live dealer here serves more as a presenter than a dealer, as the wheel is automatic, so there is no point in spinning the wheel by hand. 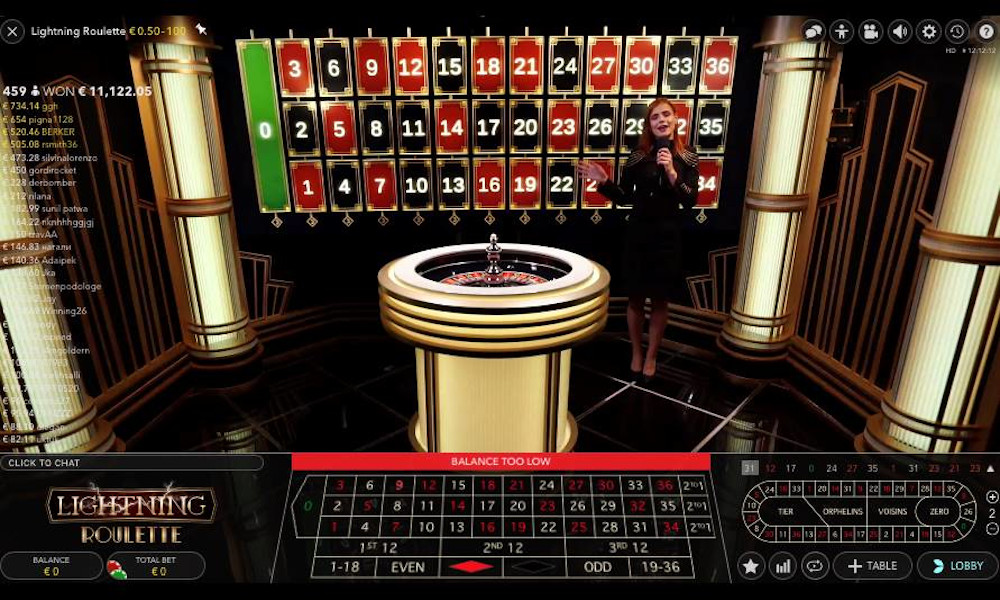 HOW TO PLAY Lightning Roulette?

To Play Lightning Roulette, you first must pick and place a bet. The cost of a round can be either €2 or higher. The highest amount that you can place on a bet is €10,000. Once the game starts, the wheel automatically spins. The live dealer doesn’t turn the wheel, but instead just accompanies the players and chats while they play. As usual, you can bet on individual numbers, colours, or groups of numbers.

The name stems from the unique Lightning feature that randomly appears at the end of the round. We’ll talk about this feature more in the next section, but we want to highlight that the feature affects the odds. Hence, the payouts differ from bets in other Roulette variants. For example, the payout for straight up bets can range between 29:1 and 499:1. For Split bets it’s 17:1, street bets have 11:1 payouts, while corner and line bets have 8:1 and 5:1 payouts, respectively.

As we mentioned, the live dealer acts as a presenter in Lightning Roulette. He or she stands next to the wheel and talks through the game to the players. When the time comes, the dealer pulls the lever, which triggers the lightning feature. The studio around is neatly decorated to give off an intriguing vibe. It is certainly not a typical Roulette studio but instead looks like a studio built for a TV show. The colour scheme consists of red, black, and green, with golden accents around the studio. The rest of the automated interface is very straightforward, so all players will have an easy way of navigating.

Design, soundtrack, effects, the dealer, and the payouts make this game a must-try Roulette variant. However, the single special feature that Evolution introduced with this game makes this game one-of-a-kind. If you still aren’t convinced to give this game a spin, the following feature will encourage you to play it instantly.

Although it has only one unique feature, Lightning Roulette is one of those games that you must play at least once. Among live Roulette tables, this variant stands out for its innovative design, a unique feature, and excellent payouts.

The Multipliers are the real stars of this show. Thanks to Lightning Numbers, players can swing substantial Multipliers and boost their game to enormous heights in no time. Add the betting range of €2-€10,000, and you will quickly realize the potential of this game.

The game is a mixture of single-zero European Roulette and innovative RNG games with 500x Multipliers. There is a 97.30% RTP and extra high volatility, which makes this game a perfect choice for high rollers that enjoy betting big. Online casinos that work with Evolution Gaming have this game in their Live sections available for all devices.

WHERE TO PLAY LIGHTNING ROULETTE FOR REAL MONEY:

Players, we need your help with how we should to rank and rate these reviewed casino games. You can help us by rating this game, and if you really enjoyed playing Lightning Roulette. You can also share it with your friends on Facebook, Twitter and via email. For all freeplay games, if your free credits run out, simply just refresh the page and your balance will be restored.

See all of our Live Casino Games game reviews where you can play 80 live casino games games for real money in any of our recommended casino sites.