The Greatest Cards Show is a live dealer casino game by Playtech. This title offers an interesting and unique atmosphere, giving off the vibe of travelling fairs. The central feature of the game is a big 54-segmented wheel. The wheel itself is interestingly mounted horizontally, much like a roulette wheel. The segments are feature contents of a deck of playing cards, while the remaining two segments hold the Jokers.

Players who wish to give The Greatest Cards Show live game a shot stand to win a minimum payout of 40x if they manage to correctly predict where the wheel will stop. In addition, the two Joker segments lead into one of three RNG bonus rounds. Two of these, Silver and Gold Bonus rounds, require a winning bet on a randomly selected card.

This Playtech’s unique addition to their live games portfolio comes with a maximum multiplier of 5,000x. In addition, multiple Joker Segments that can boost multipliers up to 8x. The Greatest Cards Show features a 96.67% RTP. Place your bet on any of the bet positions and pay close attention to the cards with a silver or gold frame. These cards will lead you into the Spotlights or the Light Show Bonus games, where multipliers await! You can also benefit from the Jokers Bonus game: a peculiar round where you get to pick a card champion which will duel other champions for the first, second, and third prize.

Even more multipliers are available in the Joker Bonus game, so this is definitely a live dealer title you should not miss! If you wish to know more about this Playtech’s title, keep reading our The Greatest Cards Show review. 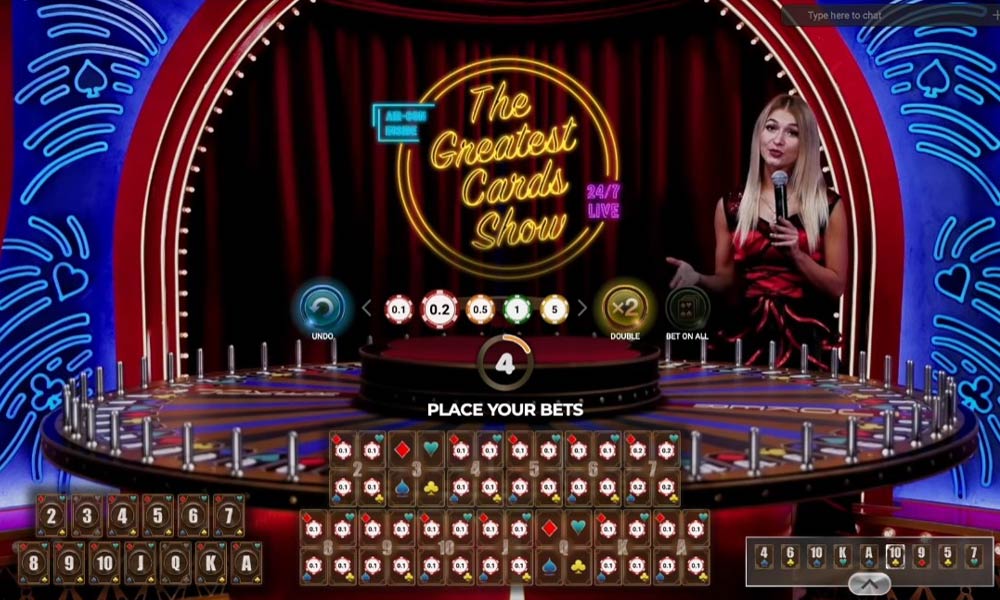 HOW TO PLAY The Greatest Cards Show?

The game starts once you place your bets on the betting grid. The Greatest Cards Show comes with a betting range of a minimum €1 to a maximum €100 per round. Players can place their bets in several ways. You can bet on particular numbers (which cover each suit), a range of numbers, or individual cards.

When the betting time has closed, a curtain opens to reveal three to twelve randomly picked dancing playing cards, bordered in Silver or Gold. The silver-bordered ones take players to the Spotlight Bonus round, while the gold ones take them to the Light Show Bonus round. The dealer will spin the wheel, and there are five outcomes that can result from the spin.

Remember, to enter any of the bonus rounds, players must have an active bet on the winning number. As we have mentioned, the game features a 96.67% RTP with bonus rounds with multipliers. The gameplay might sound a bit complicated, but do not worry. After the wheel has turned once or twice, you will have already gotten the gist.

The Spotlight Bonus game is triggered when the wheel stops on a silver-bordered card. If you have an active bet on the card you will enter the bonus round. All you have to do is sit back, watch, and wait for the outcome. The spotlights appear in the centre of the screen, each featuring a randomly selected multiplier. The winning card will then appear on the screen, walking towards one of the spotlights. The multiplier qualifying players’ win depends on where the card stops.

The Light Show Bonus game is triggered when the wheel stops on a gold-bordered card. In this round, players can benefit from payouts between 50x and 5,000x their stake. Players have to choose one of the three coloured lightbulbs – Green, Yellow, or Blue. When the game is triggered, you will see a grid with 20 lights, each boasting a random multiplier. The layout stays the same for each colour. A light beam will bounce around the grid, settling on a multiplier spot. This multiplier is then the payout for the first coloured lightbulb. The process is the same for the other two colours, as well.

Now, The Greatest Cards Show also features a Joker spot on the wheel. The spot will take you to the bonus round, and can boost the multiplier up to 8x. The Joker round is the longest of all the bonus games, so players should prepare for a little bit of wait. Basically, the game is a duel between the four card suits, with three multiplier prizes up for grabs. Before the round starts, multiplier values are applied to each of the winning positions.

You pick which card to back. The cards participate in the juggling match, with the ultimate winner being the card that produces a rabbit from the hat.

The Greatest Cards Show is definitely an interesting a unique addition to the live casino space. The title is the first to use a horizontally mounted wheel, instead of the vertical one. We are also pleasantly surprised to see playing card segments on the wheel, rather than numbers. The gameplay is definitely highly entertaining, with multipliers similar to the games such as Boom City Live and Adventures Beyond Wonderland. The RTP is 96.67%, which is pretty average for a game of this type. However, if there is one thing some players might dislike, it is the bonus rounds. Although they are highly rewarding, they do take some time and do not really build anticipation as some other games tend to do.

The best way to see if this is the game for you is to simply play The Greatest Cards Show. The game certainly does not disappoint, so check it out at any Playtech-powered casino.

WHERE TO PLAY THE GREATEST CARDS SHOW FOR REAL MONEY:

Players, we need your help with how we should to rank and rate these reviewed casino games. You can help us by rating this game, and if you really enjoyed playing The Greatest Cards Show. You can also share it with your friends on Facebook, Twitter and via email. For all freeplay games, if your free credits run out, simply just refresh the page and your balance will be restored.

See all of our Live Casino Games game reviews where you can play 79 live casino games games for real money in any of our recommended casino sites.

PLAY THE GREATEST CARDS SHOW AT THESE TOP RECOMMENDED CASINOS

God of Storms
God of Storms is one of the hit slot games from Playtech and it is part of the popular ...
Software:
Playtech
Reels:
5
Paylines:
25
RTP:
96.14%
Volatility:
Medium