Astro Legends: Lyra and Erion is a powerful product of collaboration between a casino industry giant Microgaming and an independent studio Foxium. This futuristic pop-themed online slot is a brilliantly designed game which brings innovation into both the visual and mechanical segment.

This space adventure is a story-driven slot presented in high-end visuals which is a perfect example of a growing trend in online industry – gamification. Without the standard reel set in the shape of a box, Astro Legend: Lyra and Erion slot game comes in a diamond-shaped grid with 9 paylines.

It features a cluster pay mechanics and boasts a stretch of highly engaging bonus features which can bring up to 15,000x line bet to a lucky player. 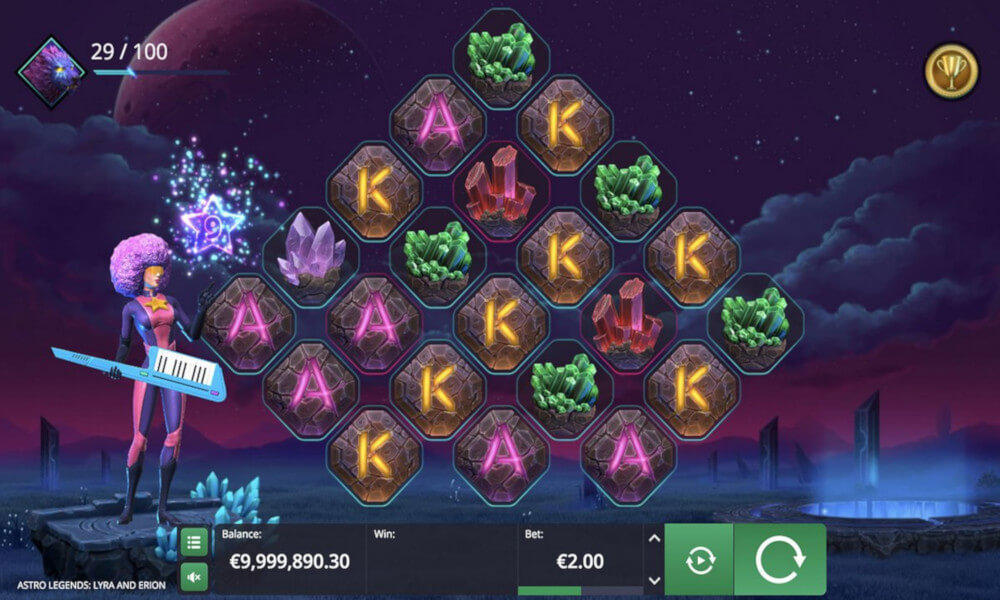 HOW TO PLAY Astro Legends: Lyra and Erion?

Set in an outer space and a world unknown to mankind, Astro Legend: SLyra and Erion slot game is a high-definition product bursting with top-class graphics. The soundtrack is equally impressive, features futuristic-pop tunes provided by none other than Lyra. One of the two main characters in the game is playing a keyboard guitar on the left side of the reels, setting a perfect tone for action that’s to come.

Being an unusually designed game with a diamond-shaped grid, this game does not have reels that will spin to give you win. A tap on the spin button, however, will see the symbol celss get populated by icons randomly dropping in a rather satisfying manner.

Astro Legends: Lyra and Erion is a cluster pay game and you will need t oline up a combination of at least five symbols in a cluster in order to get a win. Garnet crystal is the most valuable symbol in the game whereas the list also includes Amethyst and Peridot, along with a string of classic playing card symbols – A, K, and Q. Foxium has made this game a highly affordable one with bets starting at €0.10. The bet range goes up to €10 and is expected a wide audience, especially with a 15,000x line bet potential.

Apart from its beauty and an impressive visual appeal, the real strength of this futuristic game lies in its innovative gameplay. Astro legends: Lyra and Erion is fitted with some of the classic slot features, but is dominated by a more gamified mechanic.

Multiplier Wild – the Wild symbols only appears in 3 hexagonal cells coloured in red. It stands as a replacement for all other symbols on the grid and will spice up all wins it becomes a part of with random multipliers varying from 2x to 5x.

Sonic Respin – wins that are made up of the same symbol will randomly activate this feature during which all winning symbols will be held in place as others go through a respin. The process will go on until no more symbols are added to the cluster – or until it completely fills up the screen.

The Stardust Collection – this random feature is a beautiful addition to the gameplay which involves a video snippet of our music playing girl Lyra touching the bubbled star to add it to collection meter. This Stardust bubble will appear randomly, carrying points from 2 to 10. You need to collect 100 points in order to trigger the Lyra Spirit Bonus which is the pièce de résistance of this game.

Lyra Spirit Bonus – it’s a little known fact that Lyra is playing her guitar to kill the sadness within. She’s been held captive by the evil Erion and in order to escape she needs to turn into a wolf. Once you collect 100 points on the meter and the bonus starts, she will be given a choice of three different paths to follow in order to seal her escape. Lyra’s wolf has three lives when the bonus begins. It needs to go through 7 levels in order to escape Erion’s clutches. Each path will see the Wolf collecting gems. Through levels 1, 2 and 3, Erion will randomly hit one of the paths. Through paths 4, 5, 6 and 7, Erion will hit two of the paths. If a path gets hit by Erion with Wolf on it, this beautiful animal will lose a life. If the Wolf has any remaining lives at the end of level 7, an additional prize of 20x will be awarded to the player.

Astro Legends: Lyra and Erion takes a different approach to a vast majority of games available on the market and it is fair to say Foxium set a completely new bar with it. It’s thanks to this game’s unique mechanics and gameplay that we find it so compelling, whereas its winning potential and impressive visuals are a bonus win.

Without a standard set of reels but with a diamond-shaped cell form, this game comes with a Cluster Pays mechanics and an enticing mixture of bonuses. From multiplying Wilds and Respins to a Bonus feature that takes you through a mini-game of its own kind, this online slot has it all.

The best thing with this game is its affordability which will make even the hardest Sci-Fi opponents fall in love with Astro Legends’ innovative gameplay.

WHERE TO PLAY ASTRO LEGENDS: LYRA AND ERION FOR REAL MONEY:

Players, we need your help with how we should to rank and rate these reviewed casino games. You can help us by rating this game, and if you really enjoyed playing Astro Legends: Lyra and Erion. You can also share it with your friends on Facebook, Twitter and via email. For all freeplay games, if your free credits run out, simply just refresh the page and your balance will be restored.

Terminator 2
Terminator 2 is a sequel video slot from Microgaming and it is based on the hit movie. ...
Software:
Games Global, Microgaming
Reels:
5
Paylines:
243 ways to win
RTP:
96.6%
Volatility:
Medium