Dinosaur Rage slot is the upcoming 5×4 slot with 1,024 winning ways from Quickspin. Anna the Explorer is back, and this time you get to see her battling giant reptiles in the new Dinosaur Rage slot. BestCasinos.com explored the new release and concocted this Dinosaur Rage slot review to showcase everything this slot has to offer. And it is epic! Quickspin pulled all the stops with this one. And the best thing is that you do not have to be a palaeontologist to win the title’s max payout of over 17,000x the stake.

Quickspin made sure to include a plethora of innovative features in the upcoming release. Besides Dinosaur Rage! Free Spins, players shall have a chance to enjoy the Pay Anywhere add-on, growing symbols, and a Bonus Buy feature with two different modes. One version gives you a 75x the stake win, while the other is worth 150x the stake plus allows entrance to Free Spins. You can also re-activate Dinosaur Rage! Free Spins mode.

Pay Anywhere is a popular Quickspin slot modifier, and the company sought a way to incorporate it in here. The team behind the release did a great job with it as it creates an interesting dynamic. Other details about Dinosaur Rage slot include maximum volatility, 96.11% RTP, and an outstanding 17,000x the stake maximum payout. You can find the game in all Quickspin casinos starting from February 9th, 2021. 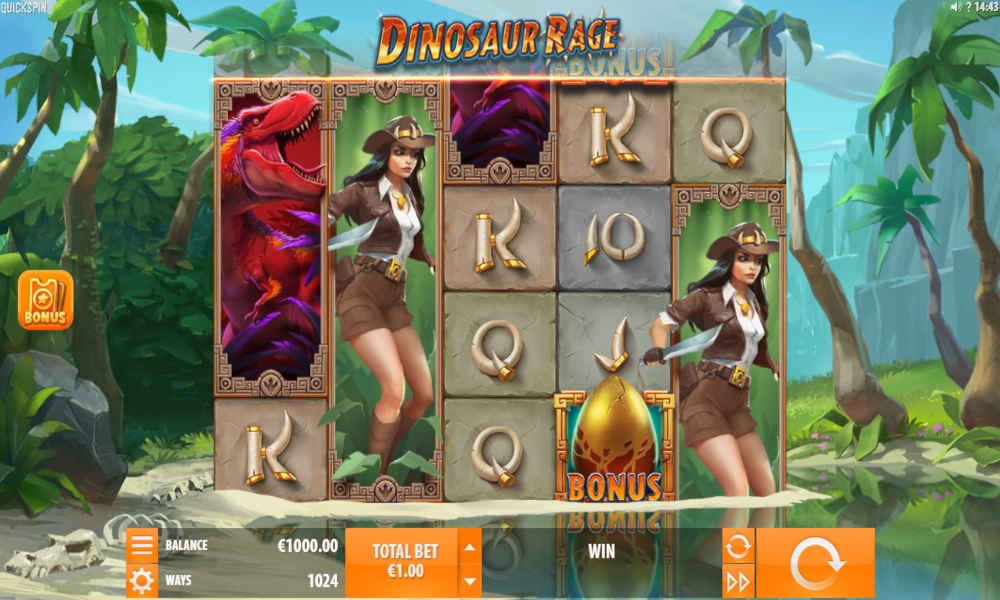 HOW TO PLAY Dinosaur Rage?

To play Dinosaur Rage, visit a Quickspin-operated casino and load the game from the lobby. Pick a bet according to the betting limit and click Spin. Dinosaur Rage slot is the upcoming slot from Quickspin which features 4 rows, 5 reels, and 1,024 ways to win. The visuals for the upcoming title are yet to arrive, so we are unfortunately unable to introduce you to the design. However, as we are avid fans of Quickspin’s work (because it is exceptional), we are confident the game will look amazing too. After all, even Bjarne Grönnevik, the company’s game producer, confirmed it. According to him, one of the artists who worked on the game has a massive infatuation with dinosaurs. His artistry spilt over to the design, and we look forward to seeing it live in February.

Another interesting detail about the release is the main character. Anna the Explorer, whom you might remember from Ark of Mystery, comes back as the slot’s protagonist. Anna is big on adventures, which means you will go with her all way back to the age of dinosaurs. Her task is to fight with aggravated dinosaurs, and we all know that won’t be an easy task. Thankfully, Quickspin found a way to boost the slot even further with the addition of so many game add-ons and modifiers. You will see a lot of her as she is one of the main symbols within the game. Other icons include dinosaurs and Nest Scatters.

Palaeontology buffs will have a field day with this one. It has 1,024 ways to win and extremely high volatility. The total RTP rate is 96.11%, which means wins will be rare but significant. Moreover, when you consider the maximum payout, it is clear this release will be a massive hit among players. Playing Dinosaur Rage for real money will cost between €0.20 and €100, and the default bet is €1. You can find the game across Quickspin’s casino network in February 2021. The exact release date is February 9th. Keep reading our Dinosaur Rage slot review for more details about features.

Quickspin Dinosaur Rage slot is rife with innovative features designed to improve your gaming experience. Let’s see which modifiers can be found in the new Jurassic slot.

Dinosaurs are back, and they are angrier than ever! Luckily, Anna the Explorer has a way around them – and she’s willing to share her insights with you. Visit Dinosaur Rage slot and enjoy playing with Anna and Jurassic reptiles for a chance to win up to 17,000x the stake.

The potential of the title is strengthened by the Pay Anywhere and Bonus Buy features which you can activate anytime. If you don’t want to pay an extra coin to get to Free Spins, stay patient and wait for them. You can get up to 25 FS in one fell swoop.

Use the betting limit of €0.20-€100 to hit a win on the 1,024-way slot. Quickspin’s new Dinosaur Rage online slot arrives at international casinos on February the 9th. Stay tuned for more info in this Dinosaur Rage slot review from BestCasinos.com.

Can I play Dinosaur Rage for free?

Yes, you can play Dinosaur Rage free of charge once it comes out. Quickspin casinos offer free play to players in most cases. The game will also be available right here at BestCasinos.com.

Yes, Free Spins are the main feature in Dinosaur Rage online game. This feature can produce up to 25 free-of-charge rounds with several icon upgrades. If you upgrade Enraged Dinosaurs enough, you might activate Pay Anywhere feature.

What is the RTP rate for Dinosaur Rage slot?

You can play online Dinosaur Rage at any Quickspin casino after it comes out in February. Have a look at our list of recommended casinos below.

WHERE TO PLAY DINOSAUR RAGE FOR REAL MONEY:

Players, we need your help with how we should to rank and rate these reviewed casino games. You can help us by rating this game, and if you really enjoyed playing Dinosaur Rage. You can also share it with your friends on Facebook, Twitter and via email. For all freeplay games, if your free credits run out, simply just refresh the page and your balance will be restored.

Divine Dreams
Slot specialists from Quickspin will have you channel your inner serenity as you ...
Software:
Quickspin
Reels:
5
Paylines:
243 Ways to Win
RTP:
96.51%
Volatility:
High
VIEW ALL GAMES