The title of this EGT provided slot game – Rise of Ra – is self-explanatory. There is not a single game provider that has not created an Egyptian title at least once and EGT is no different. Embedded with classic Egypt theme symbols and elements that illustrate the subject perfectly, this particular title has a game mechanics that will break its stereotypical nature much to your own surprise.

Five reels of the Rise of Ra playing grid are populated with scarab beetle, Ankhs, the Sphinx, emblems, the flail and crook, sarcophagi, hieroglyphic wall texts, the statue of Anubis and the Eye of Ra which are all elements you will have expected to get from a game like this.

Rise of Ra features 15 adjustable paylines which provides players with quite enough of playing combinations and options to get their hands on a particularly lucrative payout that in its standard form stands at 200,000. The game however does include a four-fold progressive jackpot which makes it ever more popular. 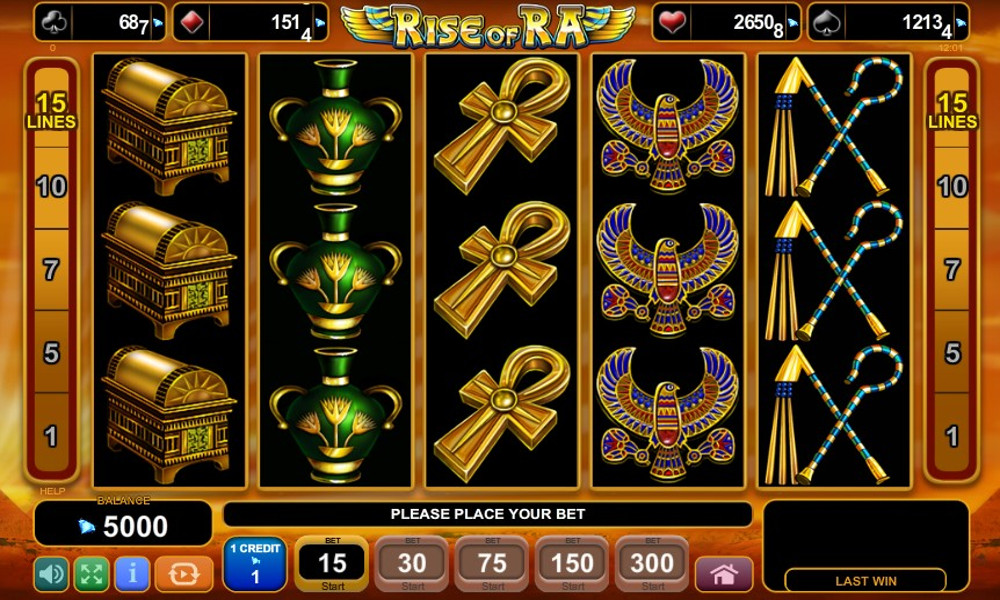 HOW TO PLAY Rise of Ra?

Popping out from a dark as night background, the flashy symbols add to the overall visual impression of EGT slot title Rise of Ra. On either side of the playing screen are the numbers 1, 5, 7, 10 and 15, indicating the number of paylines you can choose to activate per spin.

Once you adjust the payline level, look down under the reels where you will be offered a different set of bet levels, starting from 15. You can also invest 30, 75, 150 and 300 coins for a spin, hoping that game will reward you with a winning combination that will be enough to compensate the investment.

The game pays from left to right for combinations of matching symbols that start with two of those on an active payline. The Pharaoh and his queen will grant 2 coins for a pair of them, whereas the sarcophagus is another symbol paying in pairs. All the rest pay for three of a kind.

Rise of Ra is a slot game housing a simple and a rather straightforward gameplay. It is unlike those modern day slot titles filled with features that build up the gamification concept of the slot niche. It’s very much a vintage slot variant that lovers of classic slots will enjoy playing.

Wild – Scarab Beetle is the game’s Wild symbol which substitutes for all others bar the Scatter. Coincidentally, it is also the highest paying symbol in the game which can reward you with up to 200,000 coins for five in a row. When you land the Wild symbol as the substitute in any one-symbol winning combination, the payouts will be doubled.

Scattered Free Spins – the symbols with a word Scatter on it is, obviously, the game’s scattered tile which is responsible for Rise of Ra’s sole bonus feature. Once you land at least three Scatters anywhere on the reels, the game will grant 15 complimentary spins. During this bonus, all winning combinations’ value will be subject to a 3x multiplier.

Progressive Jackpot – EGT is a slot game supplier which has by now become known for its four-fold progressive jackpot. Represented through a full set of card suit, this progressive jackpot is there to put a special twist on your playing time as it can be activated after any given winning combination.

Once this happens, a Mystery Bonus feature will pop onto the screen with 12 playing cards facing down. Your aim is to find three cards with a matching suit to activate the corresponding prize.

Gamble – Last but not least is the gamble feature, another popular option in most of EGT games. The Rise of Ra comes with a Gamble feature available for wins less than 10,500 coins where you will be prompted to pick a colour of a card facing down to possibly double your winnings.

EGT should be praised for their efforts with Rise of Ra slot game. It must have been difficult to tackle one of the most exploited slot themes in an effort to create a game that will be exciting enough to attract players.

With five reels, fifteen adjustable paylines and up to 200,000 coins up for grabs for wins consisting of five matching wild symbols in a payline, EGT’s Rise of Ra is indeed quite exciting. Gamble feature makes this low to medium slot a widely popular game as well – offering a chance to double the winnings.

Still, it’s down to 15 Free Spins and a 3x multiplier applied to any win achieved during this bonus round that Rise of Ra is so appealing to a wide audience of players. Not to mention what four-fold progressive jackpot is doing to this game’s popularity.

WHERE TO PLAY RISE OF RA FOR REAL MONEY:

Players, we need your help with how we should to rank and rate these reviewed casino games. You can help us by rating this game, and if you really enjoyed playing Rise of Ra. You can also share it with your friends on Facebook, Twitter and via email. For all freeplay games, if your free credits run out, simply just refresh the page and your balance will be restored.

PLAY RISE OF RA AT THESE TOP RECOMMENDED CASINOS