Book of Magic is a fantasy themed progressive jackpot slot game available at all EGT supported online casinos both on desktop and mobile platforms. This game takes you to a magical land of mystery where you’ll be engaged in a quest for scepters of power and lucrative wins that come to those who manage to save the charming Princess by defeating the evil wizard.

This Novomatic title from 2015 is a 5 reel presentation with up to 20 paying lines. The number of active lines can be adjusted to everyone’s liking but it’s reassuring to know there is plenty of opportunity for players to land hefty prizes.

The best this about this title is definitely the mystery progressive bonus which has become one of the trademark feature for the Euro Games Technology. With its rewarding gameplay which offers no less than 200,000 coins and a progressive jackpot, Book of Magic slot game is a popular choice with many a gamer. 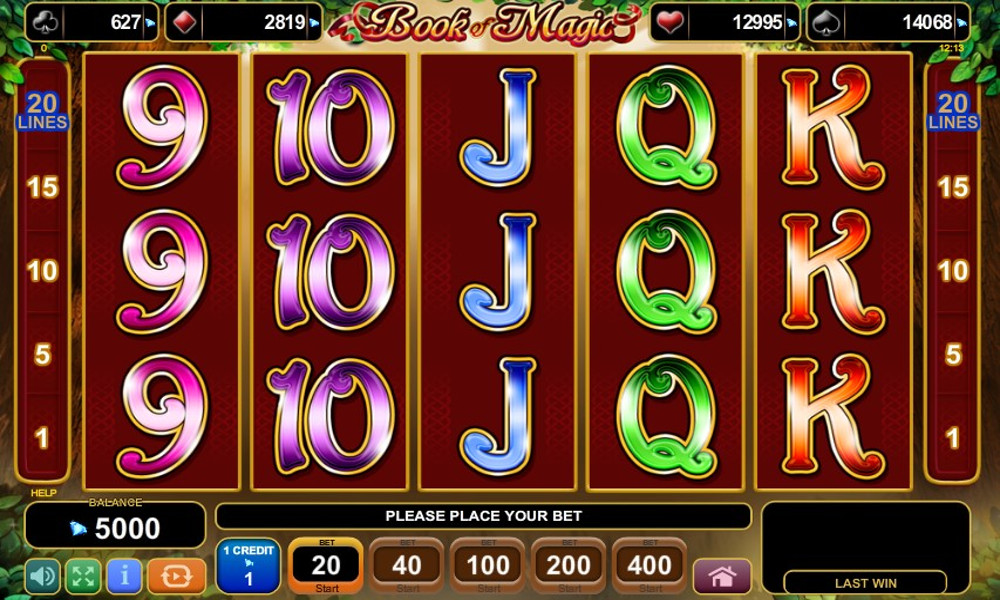 HOW TO PLAY Book of Magic?

Pleasantly decorated outlay will welcome you as soon as you launch the game. EGT’s Book of Magic comes with a vibrant design and pleasingly looking symbols which include decoratively presented playing card signs from 9 to A as the low paying symbols and a couple of high-value tiles that offer up to 200,000 coins.

Most of the symbols pay for combinations formed by three of a kind but the 9 symbol, the beautiful Princess and the evil Wizard will pay in pairs. The game pays for combinations lined up from left to right, apart from Scatter who pays in any position – also for not more than two on the grid.

Before you set the reels in motion you are advised to have a look at game controls, situated below the reels. Five different bet sizes presented in five different buttons will start the grid as soon as you click on them.

Book of Magic is a fast-paced slot game which comes with opulence of symbols and a fine selection of winning ways which – in combination – make it a rather pacey game.

EGT has become renowned for its Progressive Jackpot games but it’s also a software developer that likes adding a little extra to spice up the gameplay. For starters, players are given a unique opportunity to enjoy in the Gamble button.

Gamble – everyone likes an extra twist to the base game and it’s fair to say the Gamble feature has become one of the most exploited playing options. It’s basically a pick a colour game during which you will be prompted to choose between Red and Black in order to have your base game prize doubled. Naturally, a wrong pick will get you back in the game with no coins in your pocket. You can gamble all base game wins that don’ exceed 700 coins.

Wild + Scatter – the book of magic symbol is representing the game’s Wild. It replaces for all other symbols and will ad an extra value to all of the wins you achieve with it in combination by doubling the sum of your prize. Scatters are represented as a glass ball which is – together with Wild – the most valuable symbol in the game. It, however, will also launch the only special feature in the house.

Free Spins + Multipliers – Glass Ball symbol is the most exciting symbols in the game as it is responsible for Book of Magic’s biggest attraction. Landing at least thee Scatters anywhere on the lines will throw the total of 15 free spins your way. What’s more, all wins that will have a 3x multiplier applied to further get you excited. And if that’s not enough, you can always re-trigger this feature for another batch of 15 complimentary rounds on the reels.

Four Level Progressive Jackpot – Suitably called Jackpot Cards, the progressive mystery bonus is revolving around four different card suits. Ranked from lowest to highest, there are clubs, diamonds, hearts and spades within this four level progressive which can hit you anytime after a winning spin. Once active, this feature will have you matching three identical suits our of a deck of 12 cards facing down. Three matching suits will activate the corresponding jackpot that will be instantly credited to your account.

Book of Magic slot from EGT is close to most of the games we’ve seen from this developer lately. A magical theme, however, adds a special twist to this classic video slot which comes with a rather exciting gameplay.

Players can double their base game wins – lower than 700 coins – with the Gamble feature, whereas the proper attraction comes during the Free Spins. These are activated by landing at least three Scatters anywhere on the reels.

The best thing about the Free Spins – apart the fact they can be re-triggered – is the fact all wins will be subject to a 3x multiplier that will boost your winning potential and lift it to a whole new level.

WHERE TO PLAY BOOK OF MAGIC FOR REAL MONEY:

Players, we need your help with how we should to rank and rate these reviewed casino games. You can help us by rating this game, and if you really enjoyed playing Book of Magic. You can also share it with your friends on Facebook, Twitter and via email. For all freeplay games, if your free credits run out, simply just refresh the page and your balance will be restored.

PLAY BOOK OF MAGIC AT THESE TOP RECOMMENDED CASINOS