Goddess of War slot is a 3D video slot by Endorphina with 5 reels, 40 lines, and 96% RTP. The Hindu-themed online slot pays up to 100,000 coins for maximum wins. The superb 250x maximum payout potential is not the only thing you’ll sure to find appealing. Goddess of War video slot also includes great special features, a good-looking Hindu theme, and two powerful Hindu deities reigning over the grid.

Keep in mind that the only two official game features within the Goddess of War online slot are Free Spins and Expanding Lion Durga Wilds. Durga comes as the Expanding Wild, which grants Multipliers and Expands every time it hits the reels. If it participates in a win, you will get either a 2x or 3x boost. There are also Free Spins accessible via 3 Scatters. Before entering the round, each player is given a chance to choose between 4 different free spins modes.

The game has 96% RTP, just like other Endorphina online slots. The setup does not surprise us, either. You have 5 reels, 4 rows, and 40 paylines. It’s all standard for a 3D online slot such as this one. Players can wager anything between €0.40 and €400 per spin, potentially hitting the 250x maximum win. The highest win comes as 100,000 coins in one fell swoop. Keep reading our Goddess of War slot review to discover other interesting game details! 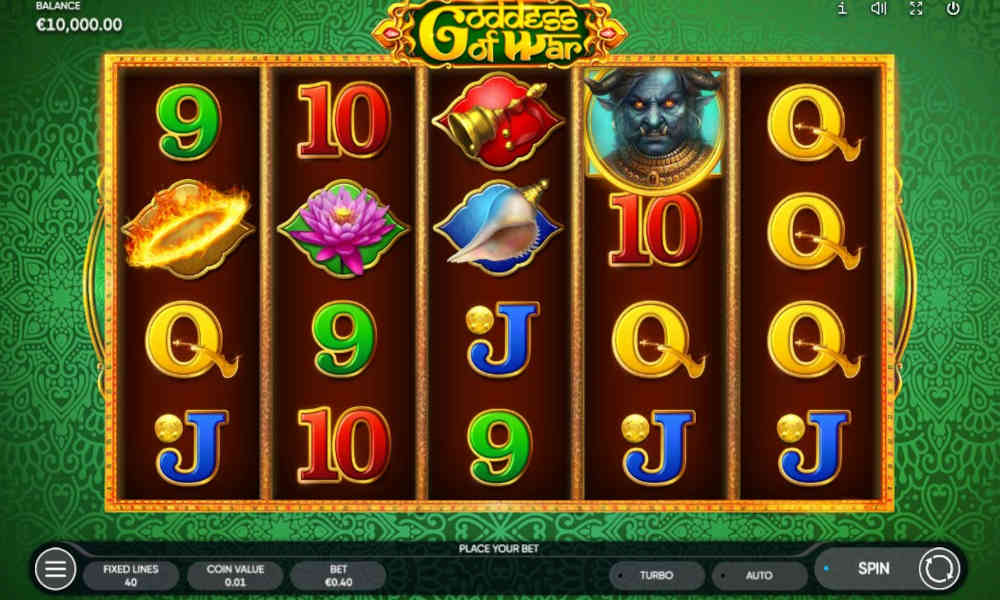 HOW TO PLAY Goddess of War?

If you are not familiar with the Hindu pantheon, you are about to step into a world of wonder, magnificence, and splendour. Durga, the titular goddess of war acting as the main goddess, is the mother of the universe. Feared by many and revered by most, Durga (or Shakti) was created with one purpose – to defeat the horned Mahisha. As one of the strongest goddesses in the pantheon, Shakti is practically invincible – and she’s about to prove that in the Goddess of War slot. Riding her loyal lion, Durga arrives at the 5×4 grid as the Wild, who quickly expands. There’s also a catch, but you will have to wait for the next section to learn more. Other than her, the reel layout is filled with traditional Hindu symbols and card royals.

As you can imagine, everything is shrouded in gold. The game logo hanging atop the screen is decked in gold and jewellery, with the font being something you would typically see in Indian movies and shows. A lotus, bells, and rings of fire are some of the high-paying icons you can see on the grid. There are also card royals 9, 10, J, Q, K, and A as the icons with lower denominations. The bell is the highest-paying icon in the cluster of tiles.

To play the game, you first need to set up a wager and then click play. The bets go from €0.40 to €400, which is a common wagering range for Endorphina online slots. The same goes for the Return to Player rate. Goddess of War’s RTP rate is 96%. You can play the game in every Endorphina online casino, and you don’t have to compromise in terms of platforms! If you like mobile games, the release is fully accessible on smartphones thanks to cutting-edge HTML5 technology. Those who don’t like clicking non-stop are advised to turn on Autoplay and enjoy the game. For more info, keep reading our Goddess of War slot review to meet the features!

A game of war, full of symbolism and epic fights, is bound to be fun. And Endorphina agrees – which is why the company decided to add extra game features to the Goddess of War online slot. Have a look at them below!

Risk Game: The third and final feature is the Risk or Gamble. On each win, you can increase your win up to 10x if you correctly guess the colour of the suit in the deal. If you guess, you keep doing it until you check out or fail to guess correctly.

Did someone say epic fighting of the major Hindu gods? Endorphina did! The company promised a battle of epic scale, and it certainly delivered just that. The Goddess of War slot is a story of Shakti (or Durga) and her defeat of the evil demon Mahisha.

You get a first-hand experience of the epic showdown right from the lobby of your favourite Endorphina casino. The slot features 5 reels and 4 rows, but the 40 lines help you score up to 250x the stake. Durga rides her lion and occasionally expands on the grid into an Expanding Wild.

The game pays up to 100,000 coins. Your pockets will be more than full if you decide to wager at least €0.40 on this Indian-themed slot.

WHERE TO PLAY GODDESS OF WAR FOR REAL MONEY:

Players, we need your help with how we should to rank and rate these reviewed casino games. You can help us by rating this game, and if you really enjoyed playing Goddess of War. You can also share it with your friends on Facebook, Twitter and via email. For all freeplay games, if your free credits run out, simply just refresh the page and your balance will be restored.

PLAY GODDESS OF WAR AT THESE TOP RECOMMENDED CASINOS