Available at online casinos powered by  Yggdrasil, Nirvana video slot will take you on a spiritually inspiring and mind-cleansing chase after three goddesses across 5 reels and 20 paying lines.

Renowned for producing graphically sublime slot games Yggdrasil once again lived up to their reputation in a truly cinematic product bursting with rather exciting features that can bring up to a 10,000-coin payout.

This particular Asian theme boasts one main feature with three sub-bonus modes which will offer plenty of excitement on the reels. 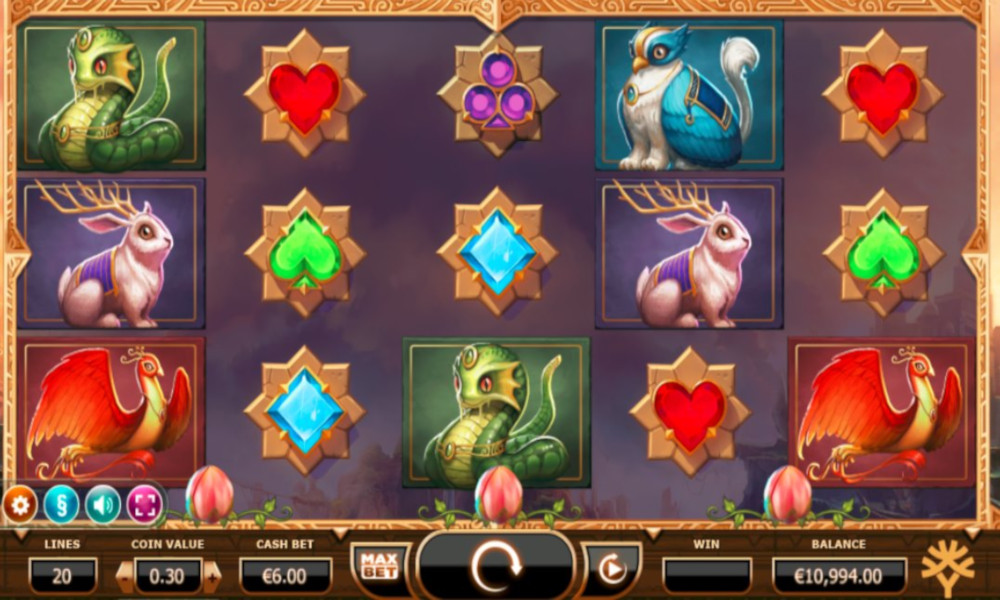 HOW TO PLAY Nirvana?

Nirvana is a game of magic and mystery, filled with imaginary animal creatures acting as main symbols. You will find a cat with a rabbit with antlers, a gold-laden dragon, a cat wearing a bird mask and a phoenix.

Furthermore, you will be met by a quartet of brightly coloured gemstones which are actually card suit symbols.
The scent of mystery is strong in this game which also brings a divine element through three different goddesses that appear during the Free Spins feature. Before you get there, you need to make sure to get accustomed to the overall gameplay of this slot.

Below the brilliantly presented playing reels, you will find all game controls allowing you to determine the coin value and the size of your cash bet, ranging from as little as €0.20 all the way to €100.

The number of paylines is fixed at 20 which promises a solid winning potential. Players can opt to go for an automated round of spins thanks to an Autoplay button. This game pays for combinations of at least three matching symbols from left to right.

If there’s one thing you can be sure of when it comes to Yggdrasil games it’s the fact they will come in impressive visuals an a feature-rich gameplay. Such is the case with Nirvana as well, knowing it’s a title that brings a hatful of winning opportunity for the players.

Wild + Scatter – both of these symbols are logos that are quite easy to notice. They both have a huge role to play. Wild will replace all other symbols – bar the Free Spin Scatter -and as such be of a huge boost to your winning potential. As for the Scatter itself, three of those anywhere in sight will launch a Free Spins feature.

Free Spins – universally accepted as one of the most popular features in slot games, Free Spins bonus comes with a rather exciting twist in Nirvana slot. Three Scatters will give you 10 complimentary rounds, which is the number of spins you get for 4 and 5 also. Still, you get a coin prize of 1,000 for 4 and 5,000 for 5 triggering Scatters.

And that’s not all as Free Spins bonus will present you with a chance to choose one of three subfeatures to play with during those 10 extra rounds. Those are:

Free Spin Re-Spin – Arguably the best thing about the entire Free Spins feature is that it can be re-triggered. Three or more Scatters will allow you to pick another feature to play with, meaning you get two subfeatures active at the same time for another batch of 10 spins. If you get as lucky as to re-trigger the Free Spins feature twice, you will have all three features activated.

Nirvana can be considered the typical Yggdrasil video slot. What this means is that it comes with a superb design, vibrant layout and a remarkably exciting gameplay that can result is lucrative payouts.

Being a high variance slot, this particular game can result in lean rounds during the base game but that is all compensated for during the Free Spins bonus when a divine intervention will occur to fill your pockets with gold.

The Nirvana slot comes with a single bonus feature which, however, has three subfeatures starring three goddesses. These will help you create better winning opportunities by throwing wilds, synchronising reels ar giving you a nudge in the right direction towards winning combination.

WHERE TO PLAY NIRVANA FOR REAL MONEY:

Players, we need your help with how we should to rank and rate these reviewed casino games. You can help us by rating this game, and if you really enjoyed playing Nirvana. You can also share it with your friends on Facebook, Twitter and via email. For all freeplay games, if your free credits run out, simply just refresh the page and your balance will be restored.