Vikings Go Wild is the first one in a series of Nordic-themed slot games produced by slot specialists Yggdrasil Gaming. This 5 reel and 25 payline machine will take you on an epic monster-fighting journey in a cartoon-styled graphics that promise great fun and alike wins.

This game is available from €0.25 a spin which makes it highly affordable. The maximum bet per spin has been set at €100 which makes Vikings Go Wild a game which can equally be enjoyed by slot enthusiasts and a higher rolling clientele.

Vikings Go Wild is all about a Free Spins feature during which the Nordic gods will bless you with 24 complimentary rounds. There’s also a Treasure Chest to look forward to as it will throw random prizes your way to help you maximise your winnings. 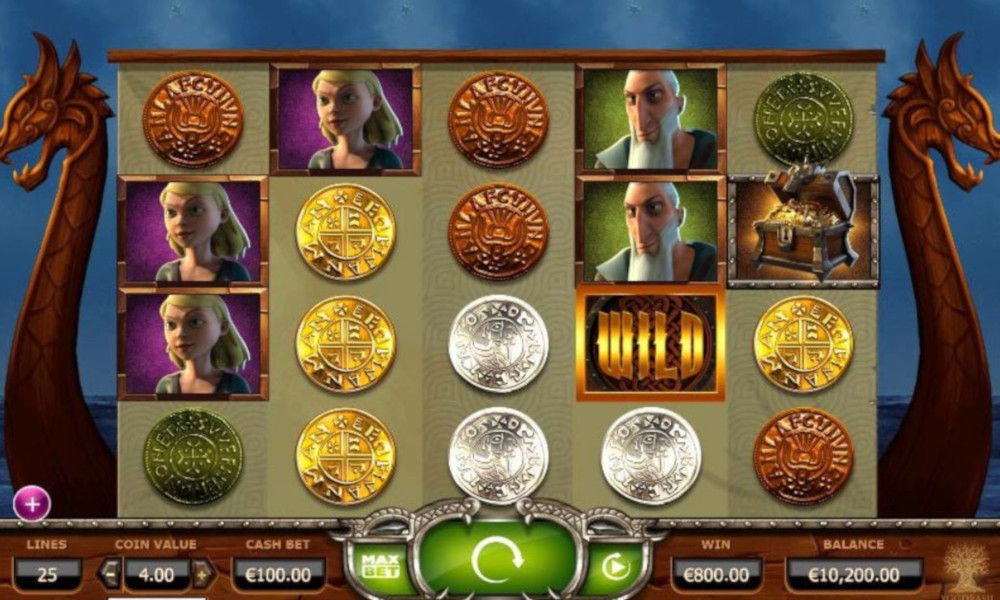 HOW TO PLAY Vikings Go Wild?

With its dazzling display of symbols spread out on a Viking ship shaped reel set, the Vikings Go Wild was a breath of fresh air when it first hit the scene in 2015. Yggdrasil did well to push forward a high-quality slot title which, at the time, was a major masterpiece.

As times go by quickly within the online gaming world this game can already be considered a classic to a certain extent. It features a standard playing mechanics with three matching symbols lined up on a payline paying, from leftmost to right.

Situated below the reels in an unobtrusive but nevertheless a prominent manner, you will find the essential game controls. Make sure to set up the coin value in order to determine your line bet, whereas you can use the Max Bet button in order to cut to the chase if you want to be a full wager. Vikings Go Wild slot comes with an Auto Play button which is a popular option for many a gamer.

Vikings Go Wild comes with a classic-styled gameplay which includes basic features such as Free Spins but also offers a base game speciality called Treasure Chest which – just as the name would suggest – offers hidden prizes for the luckiest of players.

Wild – Vikings Go Wild is a game that will obviously include a selection of different Viking symbols which are the high value denominations. You will also find a selection of four ancient Viking coins which are the low-paying symbols. Apart from the classic symbols, Vikings Go Wild also includes a Wild tile which substitutes for all other symbols except for the Free Spin Scatter. The Wild will substitute the highest winning combination from left to right and it also play a vital role during the Free Spins.

Free Spins – this universally appreciated feature in slot games is triggered by three or more Free Spin symbols which are basically a Viking ship tile with the words Free Spin written on it. These symbols will reward you with complimentary rounds whose number depends on a number of the triggering symbols.

Yggdrasil Gaming made sure to spice the Free Spins round a bit with a neat touch which. During this feature, every Viking symbol that lands on the reels has a great chance to turn itself into a sticky Wild which will then remain stuck in one place until the entire feature ends.

Treasure Chest Feature – this particular feature is triggered at random once a Treasure Chest symbol appears on the fifth reel. It is active both in the base game and during free spins though the prizes you can expect to grab will differ depending on where this feature gets activated.

During the base game Treasure Chest will open up to reveal eight to 12 Free Spins and reward you up to 1,000 coins. As for the Free Spins, a chest during this mode will throw an extra pair of free spins, up to four in total. However, it can also give you a full sticky Wild reel to benefit from. To sweeten the pot, there is and extra 1,000 coins on offer as well.

Yggdrasil’s Vikings Go Wild is a medium to high variance slot game. This particular title marked the beginning of an era for this slot developer who latched on a widely achieved popularity to introduce a string of Viking-related slot games over the past two years.

In addition to being an impeccably crafted game with crisp cartoon-styled graphics and an absolutely adequate soundtrack, Vikings Go Wild is an eventful slot. It might not feature an opulence of gaming options which have become somewhat of a standard in slot manufacturing over the past year or so, but it definitely has enough about it to be considered one of the best Yggdrasil games.

Free Spins feature is the game’s main attraction. There is up to 24 extra spins you can grab during which a sticky wild reel feature will throw wild symbols on the reels and keep them there until the end of the feature to boost your chances of accumulating big wins. You should definitely look out for a Treasure Chest feature as well, knowing it has plenty of goodies in store.

WHERE TO PLAY VIKINGS GO WILD FOR REAL MONEY:

Players, we need your help with how we should to rank and rate these reviewed casino games. You can help us by rating this game, and if you really enjoyed playing Vikings Go Wild. You can also share it with your friends on Facebook, Twitter and via email. For all freeplay games, if your free credits run out, simply just refresh the page and your balance will be restored.